These photographs of Camp Julia Crowell May 10, 1938 were donated to FoCH by Judy Heiser Heit;  granddaughter of Henry Heiser, the camp's first manager. The notations on the photos were written by Judy's mother Jean Heiser. 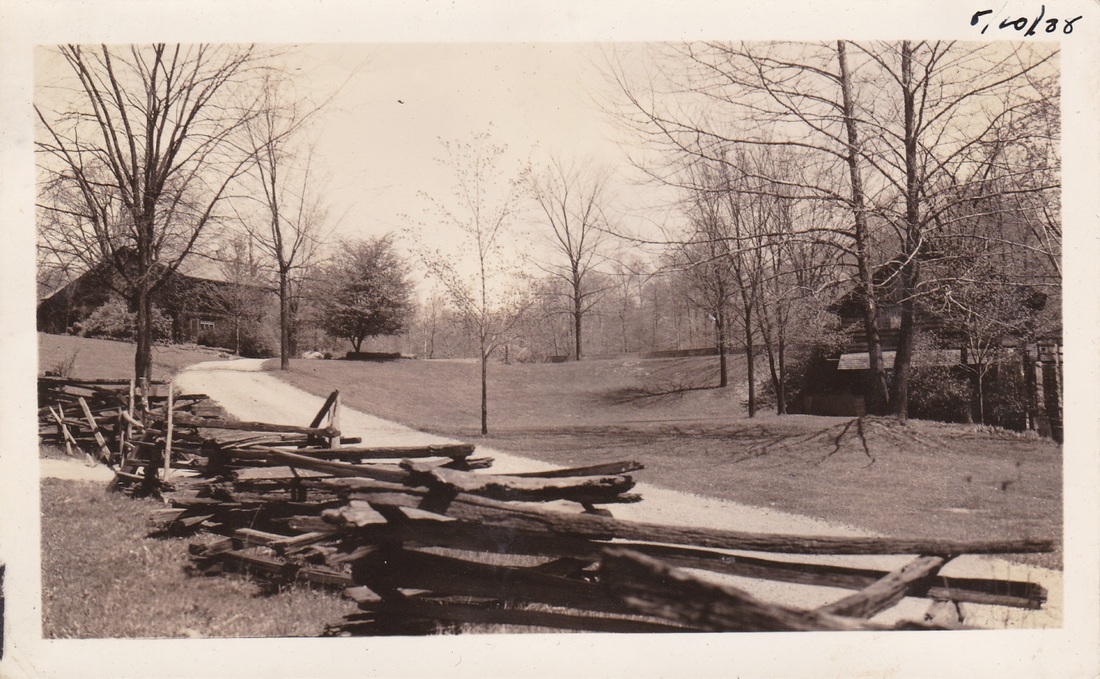 The driveway came in in from Rt 303, crossed the creek and opened out in the meadow below the house. The split rail fence was there when Kirby bought the property in 1919. Note the road going off to the left, Kirby’s Mill on the right, and the concrete parapet at the top of the dam. 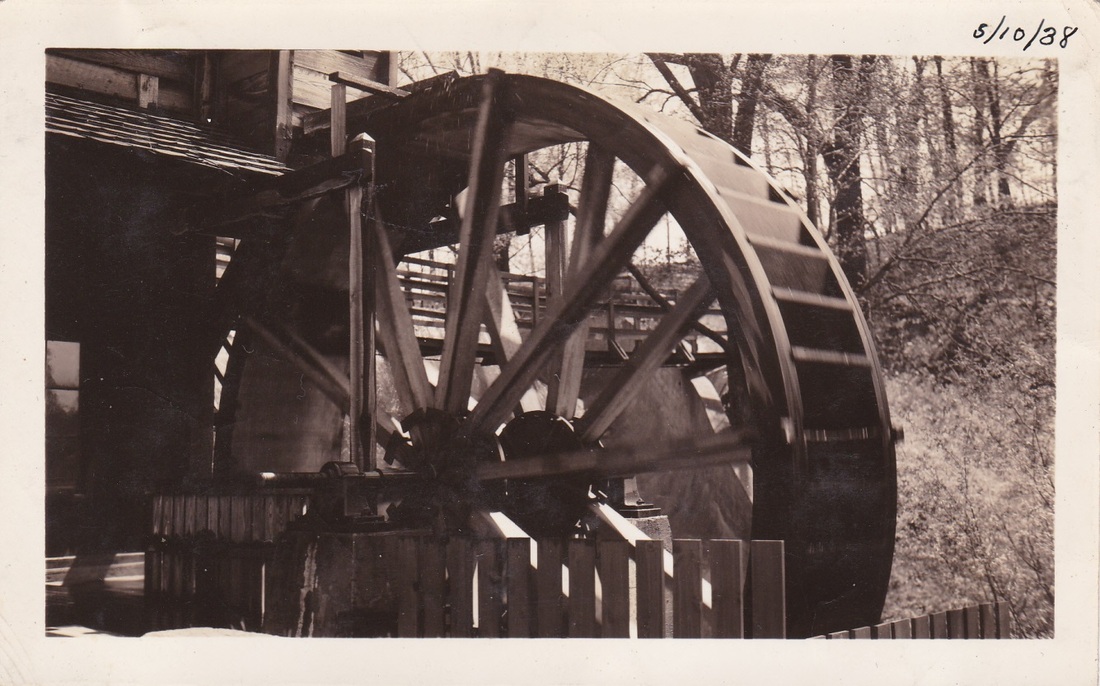 Two views of the millwheel. Above, the swinging bridge is visible beyond the spokes. Below , the slight blurring shows that the wheel was turning 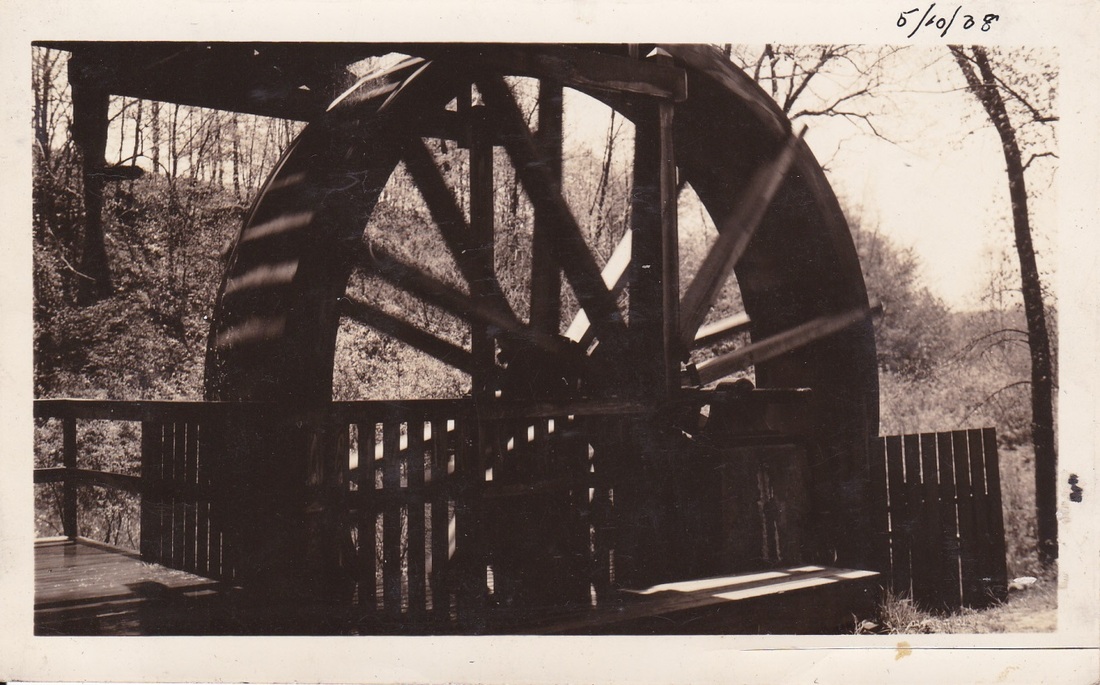 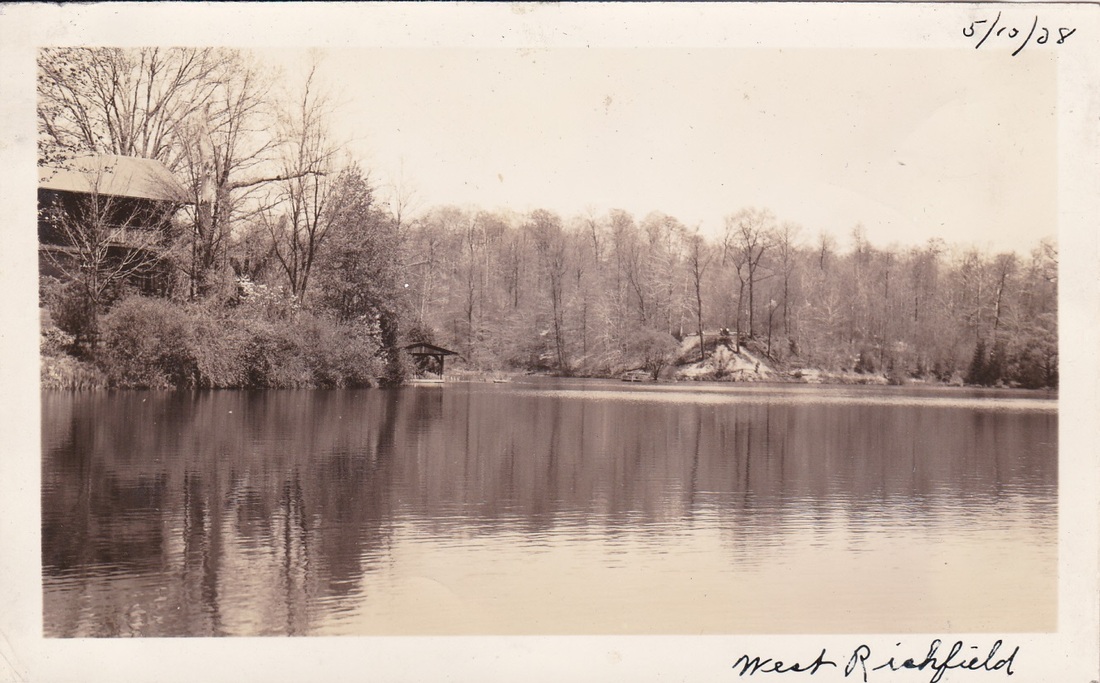 View from the rim of the dam. Kirby House on the left, boat landing ( later Cricket’s Corner) visible to the left of center. Across the lake, the hill at what would become Fernwood point looks to have been deliberately cleared – maybe to serve as a scenic overlook. 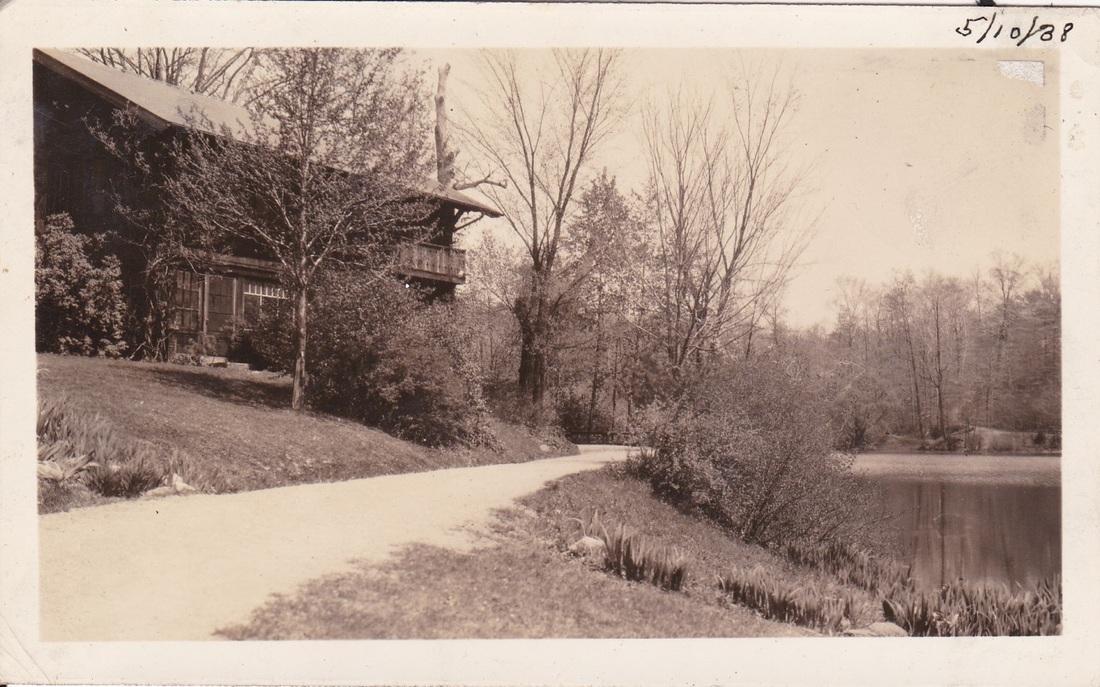 The approach to Kirby House. A stream flows down the hillside and under the road. 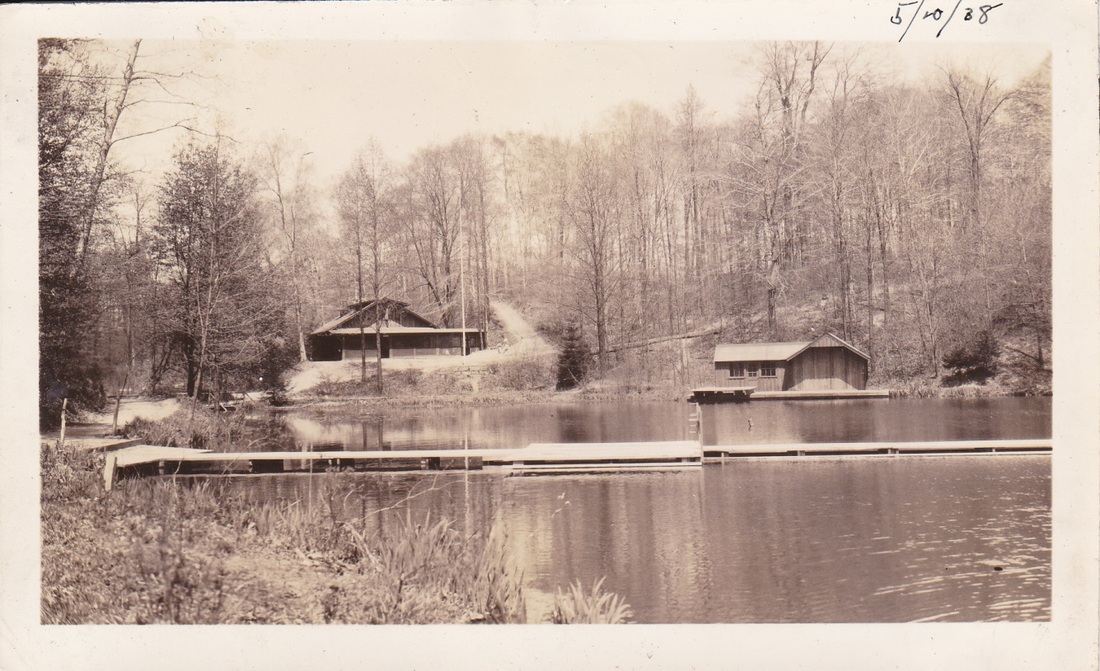 Garfield Hall in the background, boathouse tucked into the base of the hill center right. The pier in the foreground stretches halfway across the lake. 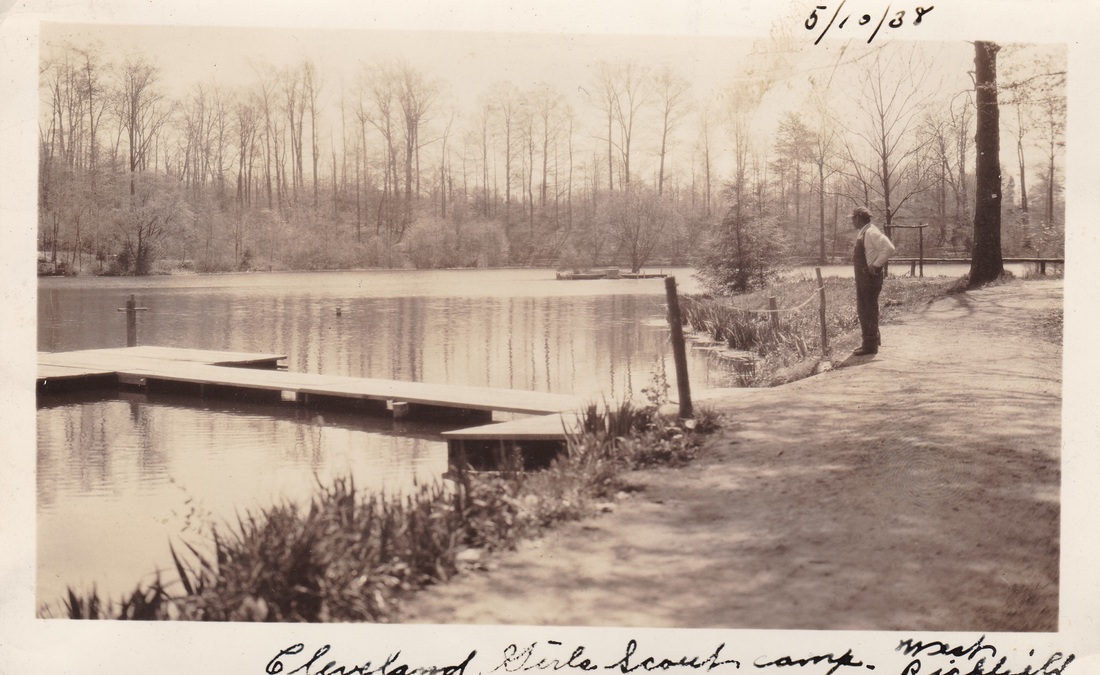 Henry Heiser, CJC's first camp manager, looking out over the lake. The overflow pipe in the center of the lake appears to have a platform behind it. 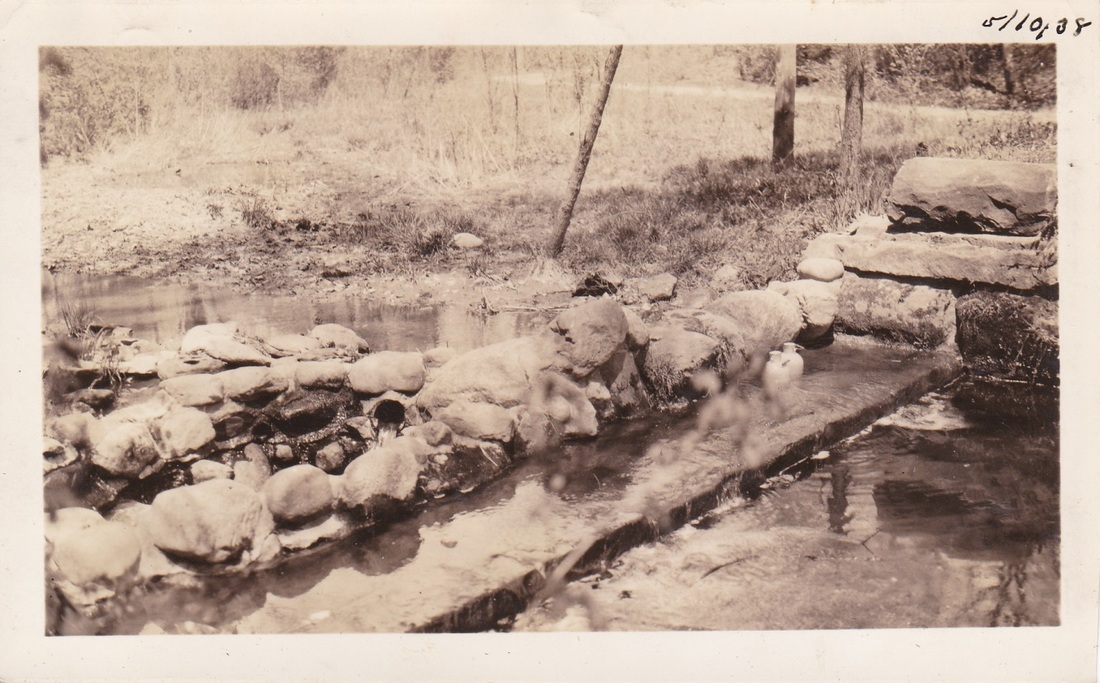 Intake dam below Garfield. The actuality doesn’t quite match up to the patent diagram. But Kenneth Swan records that a local man named Henry Hammond had the job of sliding under the lake bed periodically to clear the drain pipes, so evidently it was working. 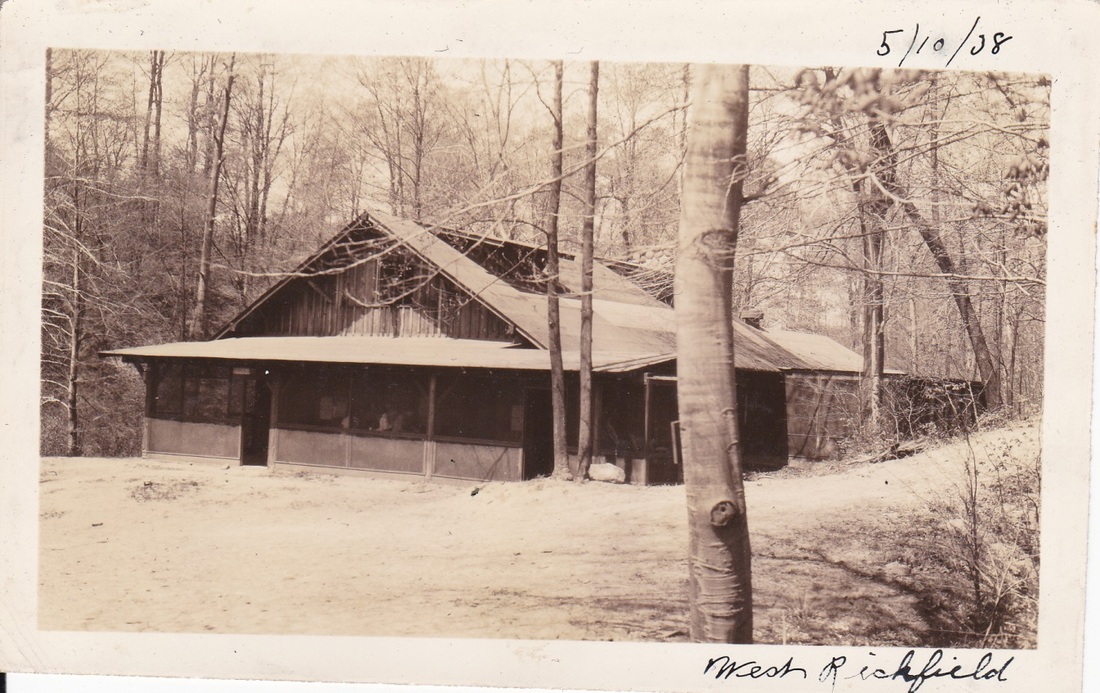 Garfield Hall. The screen on the porch was said to have been added by the Girl Scouts. If so, the screens were still new in this picture.


from Minutes of the North East District...

January 1938   ...Consider a group of apprentice girls and picked girls to train for both day camp and main camp and be available as helpers in the  camps.  These girls are to have two weeks' training at Main Camp, especially in the re-forestation work and then to meet one a month....

October 1, 1938 ... At Main Camp this year there was an attendance of 449 with 18 girls from out of town. Also stated that the revised program for Scouting dealt primarily with Homemaking, Health, and Safety"

March 10, 1939  Staff.  Miss Henry brought her usual interesting comments.  As the Nature weekend for leadersat Main Camp was so successful in 1938,  it is hoped that many leaders will take advantage of it and attend for at least one day.
The Cleveland Plain Dealer posted a small news article on July 24, 1938
" 120 Girl Scouts Seek Fun at West Richfield Camp"

The second session of Camp Julia Crowell at West Richfield is underway.  One hundred and twenty campers have been divided according to age, school grade, and camping experience into the following units: Orchard Way, Beachcliff, Fernwood, Glencairn, Hickory Hill, Windy Hill, and Innisfree.

Although the majority of campers come from Cleveland, other cities, including Wadsworth, Oak Harbor, Youngstown, and Canton are represented.

Today at 7:30 pm the campers are having a "Scouts Own Program". The program is under the direction of Mary Jane Jesse. One feature will be musical selections by a quintet made up of Dr. Jerome Gross, Irving Frank, Fred Rosenberg, Irving Klein, and Harold Fink, guests of the Girl Scouts for the day.

Minutes of the North East District

October 13, 1939
Main Camp. Miss Balliet.  October 4th meeting lasted until four.  At camp this summer there were eight units, one a primitive unit.  They had nature and dramatics. Named upper lake for Mrs. Friede - Lake Linnea.  They had a puppet show depicting the Kirby estate up to the time of purchase by Girl Scouts.  One Gyspy Unit went to Kendall State Park.
There were 442 campers.
Budget was met.
$932 allowed for scholarships
38 full scholarships given
8 half
2 part
9 agency
Troop camping cost $2.50 per person

Nov. 1939
Main Camp. Miss Balliet reported that a mall committee - naming themselves the Snoop Committee - had visited the cabins and main camp and checked on general conditions of same and found several items that should be checked on at the cabins as the conditions, etc

December 1939
Main Camp. Miss Balliet reported that the report on cabins had been submitted to Council and many of the items refferred to taken care of. During hte skating season the ice would be tested at Main Camp by the farmer and his report phoned into the office where any inquiring about skating can inquire relative to same.