Friends of RHP are stabilizing Amity House, North House, and Kirby House.  A separate nonprofit group was started to restore Oviatt House.  The Lodge ( fomerly Gund Hall) has never needed stabilization, but has undergone extensive improvements.
This year's work has been made possible by generous donations from the Dorn Family Foundation, the Charles and Helen Brown Memorial Fund, and an anonymous donor
​ 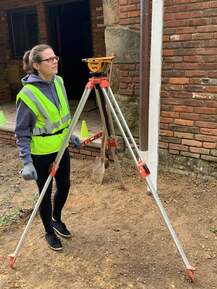 ​Amity House was selected as the primary project for 2019 because it is the first major structure visitors see when they head north from the main parking lot.  Its nearness to The Lodge and to parking give it an "edge' as a potential program site.


​ Corey Ringle, AIA serves as the Chair of the Historic Structure Stabilization Task Force  as well as President of Friends of Crowell Hilaka
The first steps took place in March 2019 when the Historic House Stabilization Task Force took measurements and assessed the conditions of Amity, North, and Kirby Houses. Consultants Tim Ochwat, Ken Bowman, and Chuck Rankin worked with Task Force Chair Corey Ringle and RJRD Park OPerations Chair Jeff DeLuca to develop a plan of attack
On September 14,  a crew created a swale in the front of the house to direct water runoff from the hill side around the house and down the slope toward the lake.
Dehumidifiers and fans were purchased and installed to dry out the basement before interior work began 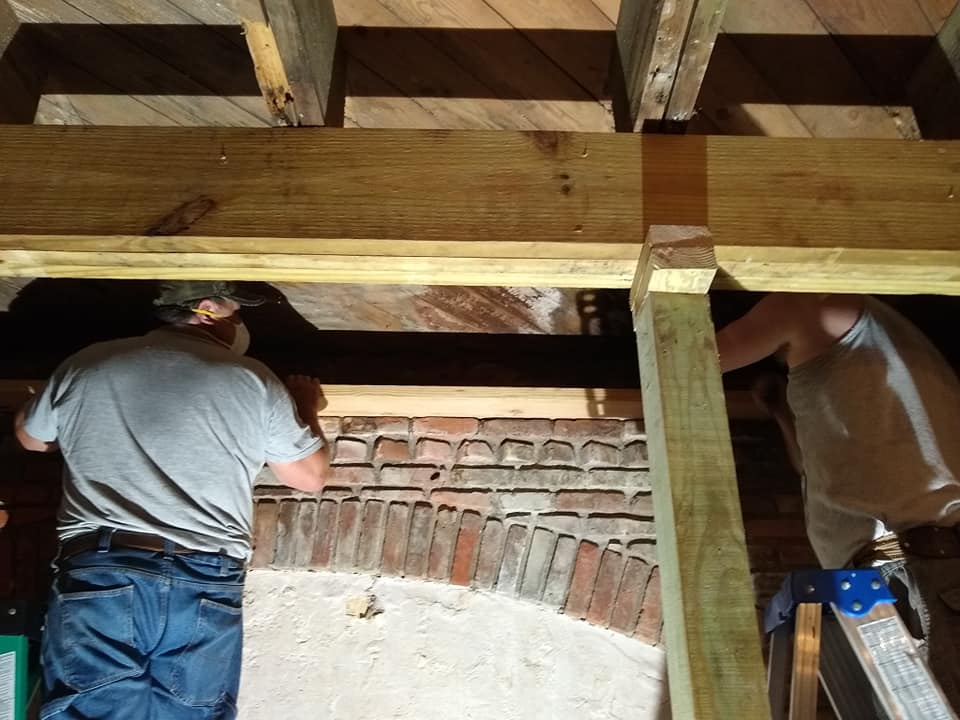 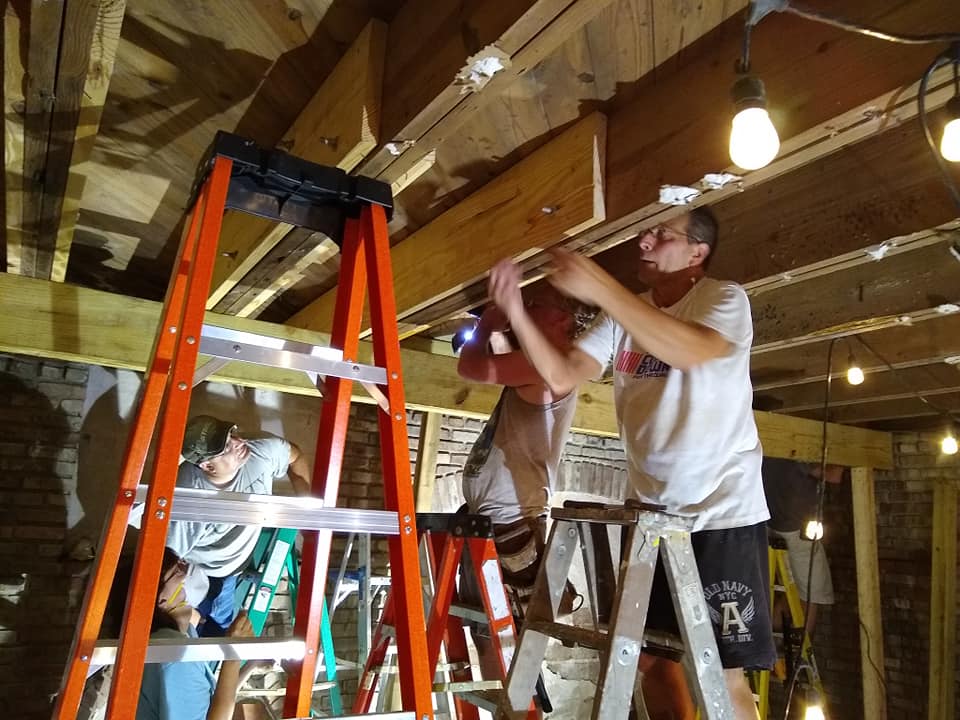 Stabilization of North House took place even during the winter months of 2022
May 2022.   The original 1927 blue prints were reviewed to plan repairs.  Thomas and his son taught us how to do masonry repairs.  Then we set to work ourselves.
Interior painting to make things look nice for the open house.
September 26, 2022. Report to RJRD
Volunteers are in the process of stabilizing the floor at North House. Materials were procured and a new basement entry door installed for easier access to the work space. The deteriorated sill plate and rim joists were removed and replaced and more than half the floor joists under the kitchen and powder room. We will finish the floor joists under the powder room later this week and move to the crawlspace under the first floor bedroom early October with the goal to finish the project before the Trick or Treat on the Trail event. We are in the process of rebidding the gutters at North House.
November 21, 2022. Report to RJRD
The North House floor stabilization is nearly completed. In September, we prepped the space by procuring the necessary materials, replacing the damaged basement door with a new insulated door for better access, raising the damaged areas on a dropped support beam, and throughout the first half of October, replaced the majority of the floor joists under the kitchen area along the south end of the building.

Work at North House was temporarily put on hold when the park director asked for Friends HHSTF to stabilize the Garfield Hall low roof over the existing porch. There were multiple points of moisture mitigation that needed to be resolved before tackling the roof. The existing doors were better secured with painted plywood to prevent animals and moisture from entering the building. The broken glazing on the shed dormers on the east elevation were replaced with plexiglass. The roof rafters that had splayed due to deterioration were re-tied using pressure treated lumber. The area where the secondary shed was overbuilt the lower shed roof had so much damage, all the overbuilt rafters were fully replaced. After these points were resolved the existing roof and sheathing was removed and replaced with 23/32" plywood, 30# felt, and rolled roofing. This project was completed within 3 weeks for under $3,000.

In November, the crew returned to North House to finish the floor stabilization under the kitchen, pour a new concrete sill under the deteriorated kitchen entry door and patch the deteriorated door. On the second volunteer day, a portion of the basement drywall ceiling was removed to reveal the work to be completed under the living room. Materials were purchase, drop beam installed, and rotted sill and rim were removed. We look forward to completing the floor in the living room before the end of the year. This project will be completed in 2 weeks for under $400.
​
Respectfully Submitted, Corey on behalf of Friends of Richfield Heritage Preserve.

​
Dec 15, 2022. Report to RJRD.
When we last reported, a portion of the basement drywall ceiling was removed to reveal the work to be completed under the living room. Materials were purchase, drop beam installed, and rotted sill and rim were removed. In the two weeks since, one of which was Winter Wonders, we installed the neoprene sill sealer, pressure treated sill and rim board, and sistered the (2) 2x12 at 24" o.c. with 2x12s flanking either side and resting on the sill, toe-nailed into the rim board, and bolted with 8" carriage bolts at the connection point.

The timber frame construction consists of 4x8 posts at the corners and center flanking all three living room windows. The center post closest to the fireplace deteriorated approximately 5'-0" up. We removed the post in order to salvage the facing and will replace the damaged portion with pressure-treated built-up 2x4s. We will plane the existing post down to 1" of the healthy wood and face the built-up post with the existing board in order to match the natural graining.

What was amazing to see: the slate roof is supported by the timber frame post and beam construction. Despite a failed post, the home was so well built and over designed, there was no cracked glass, plaster, or other signs of failure. Keeping with timber frame construction, the living room windows are supported by cripple studs opposed to traditional header and jack and king stud framing.

We look forward to completing the stabilization of the bedroom floor next.