Environmental Design Group  ( EDG)  was engaged to develop a Master Plan for the Park.  EDG conducted studies of possible park uses and held several stakeholder meetings. In October 2016, five different scenarios were presented: "All In" which retained all the major historic elements, "Lakes/Dam"  which retained both dams and lakes- but no other major structures,  "Buildings",  "Passive", and "Composite" all of which removed the lower lake. Drawings of the latter four scenarios were were placed on display.  Meeting attendees were polled on which of the four they preferred. Comments from the floor expressed concerns over the loss of so many important features.
​ 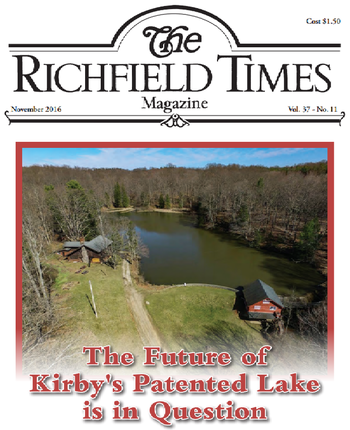 The November 2016 cover story of the Richfield Times highlighted the ongoing discussion about the future of Richfield Heritage Preserve's Lower Lake, the famous patented lake constructed by Jim Kirby to provide water for his hydroelectric mill.

The article stated that the RJRD does not have enough money to save the lake in its current form as well as save all of the historic structures on this property.


The Richfield Historical Society advocated for historic preservation in Richfield as an important part of what defines the community. They led a campaign to inform Richfield citizens about the importance of the lower lake as the central historic element of the park and circulated a petition asking the RJRD to:
The Society mailed a post card version of the petition ( shown below) to every home with a 44286 zip code. They received nearly 400 positive responses and one negative response.

​
Richfield residents speak out!    A video about the lake decision
Produced by the Richfield Historical Society.   Directed and filmed by Karl Toth. 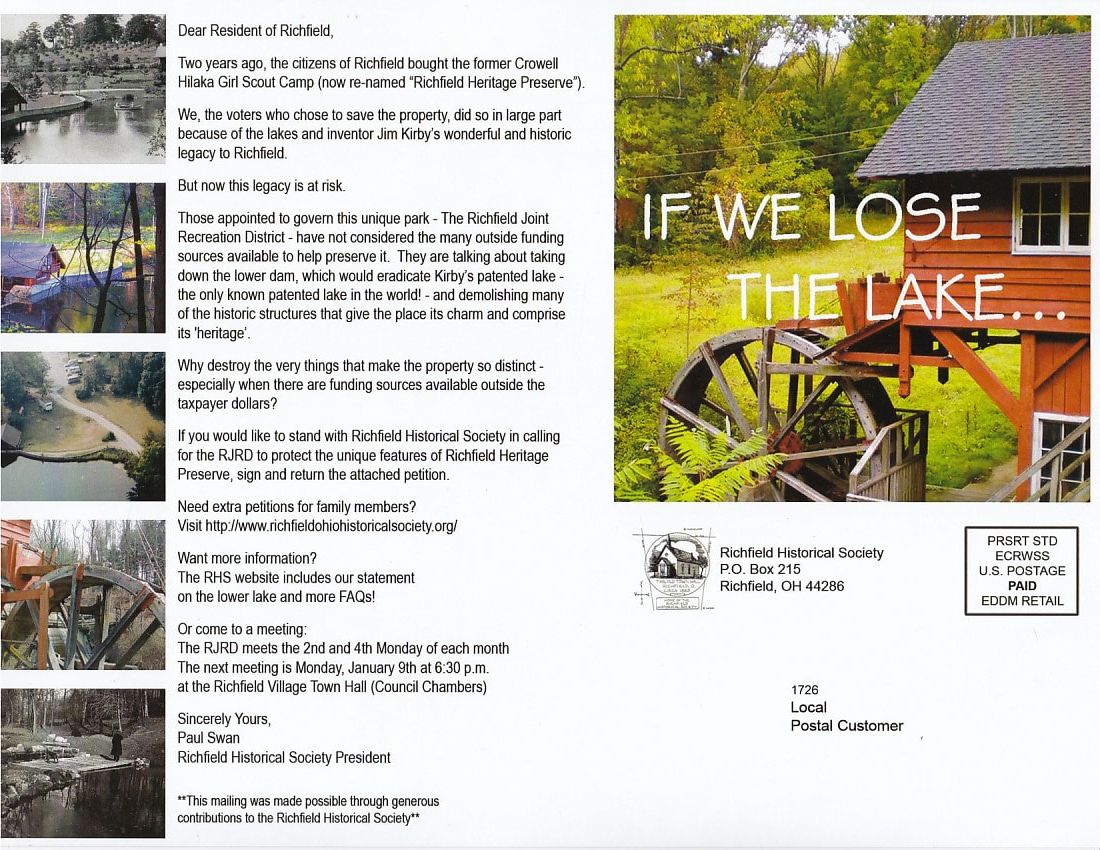 Front of the Richfield Historical Society mailer, sent to all homes and businesses in the 44286 zip code. 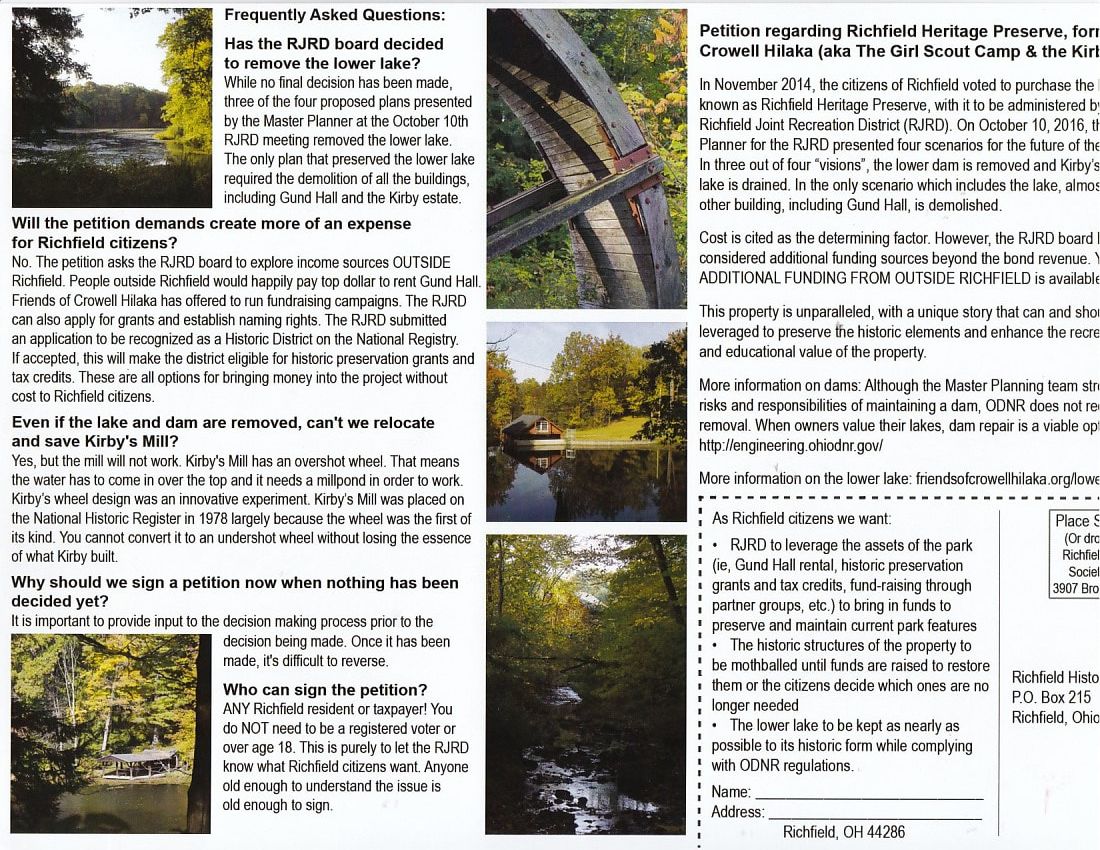 Reverse side of mailer

​After considering the response from the community,  RJRD voted to move forward with the "All In" plan

The lower lake is the central historical element in that whole property. It’s the world’s only known patented lake. Kirby’s house, the mill, the boat landing, and the dance hall are all oriented around the lake. Kirby loved it. His bedroom windows and his workshop loft all overlooked the lake. It was a source of inspiration and tranquility for him.

If you remove the lower dam, then you lose the lake. If you lose the lake, you lose the immediacy of Kirby’s story. Kirby’s story is what makes this property unique. Kirby’s home blended technology and nature - a lesson needed for our time.
Lose the lake and you lose Kirby’s 20th century spin on the ancient combination of lake, dam, mill, and bridge that existed around the world for over a thousand years. These four elements were all components of an integrated system that was the main source of power generation for over a thousand years.

Lose the lake and the mill won’t ever work. Sure you can “save” it, but what for? It’s got an overshot wheel. That means the water has to come in over the top and it needs a millpond in order to work. Kirby’s wheel design was an innovative experiment. Kirby’s Mill was placed on the National Historic Register in 1978 largely because the wheel was the first of its kind. You can’t convert it to an undershot wheel without losing the essence of what Kirby built. In addition, we are just finding out now how experimental the whole mill design was. It appears as though Kirby re-engineered his original concept for the millhouse structure. That too, is part of the story. What a great thing to demonstrate to children: if your first try fails, then re-design your solution. Kirby’s Mill shows that. But only if it has the power of falling water to drive it.

Lose the lake and we lose the opportunity to have the property designated as a historic district on the National Registry of Historic Places. This designation is not only prestigious; it makes the property eligible for historic preservation tax credits and other historic preservation grants.
​
The repair of the lower dam will cost money. But that’s why the RJRD set the amount of the bond issue higher than just the cost of the land purchase. RJRD still has millions of dollars for capitol repairs on the property - most of which must be spend in the next two years. You have the Friends of Crowell Hilaka to raise awareness, excitement, and needed funds for historic building restoration later on.