During the 1970's, the Council newsletter, The Millwheel;  reported on Girl Scout activities in and service to an increasing number of geographic areas.  Expanded outreach led to programs and day camps being held  all over the tri-county council. The Millwheel was also encouraging girls to experience the broader world when it reported on the increasing travels of troops ( often with the help of the new cookie sale rebates).

At the same time, our own camps were recognized as a phenomenal resource for our own girls and for hosting great events. Everyone loved their camps- but it was increasing challenge to fund them while supporting the numerous outreach programs.  Cookie sales were interpreted in terms of camp programs:  how many boxes of cookies you would need to sell so that the council could purchase new camp equipment.

Money had always been an issue, but in The Millwheels of the early '70s, there is a shift to more articles on the shortfalls in the administrative budget. Members paid annual dues to the National GS organization, but none of it came back to the councils who were presumed to be  be self-supporting through cookie sales, program fees, and donations. Councils were not allowed to collect additional dues or general service fees.   SME  - sustaining membership enrollment -was devised as a voluntary contribution program.

The mid-1970s emphasized the American Bicentennial: Kirby's Mill became the GS History Museum and was added to the National Registry of Historic Places.  Doodle-le Doo was a National Wider OP held at Crowell Hilaka.  Girl Scouts were becoming aware of the environmental price of progress. "Ecology" was the watchword of "Cricket Day" which honored Helen Peterjohn of Cricket's Corner . 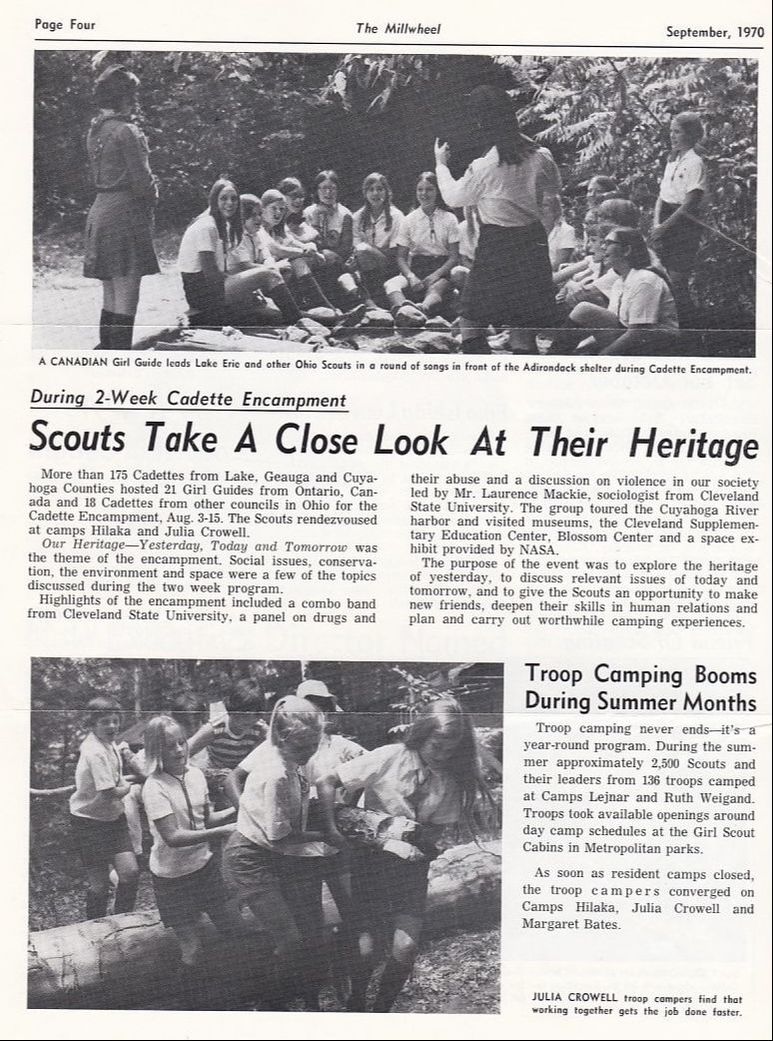 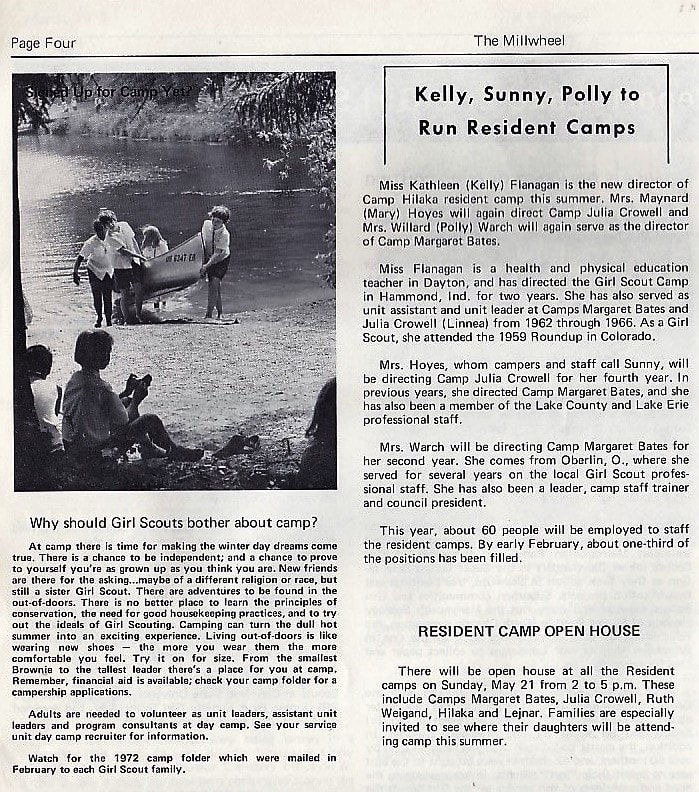 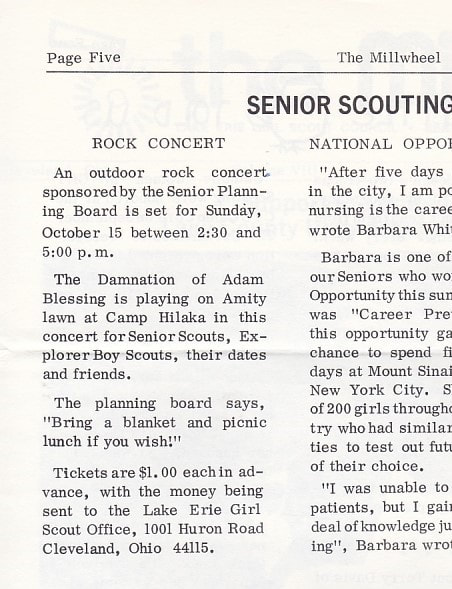 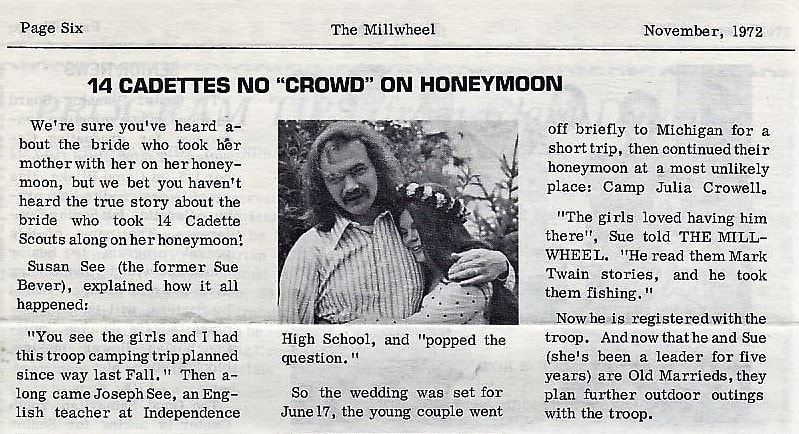 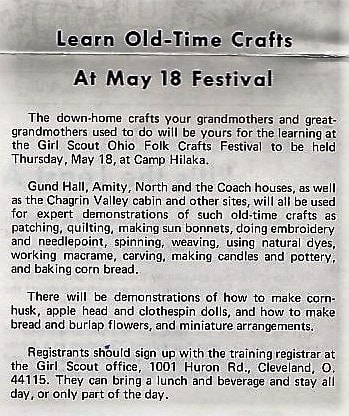 From The Millwheel, May 1972
The Ohio Folk Crafts Festival announced in the article above was a success, " the most popular training" according to Gunta Douglas in the 1973 lead article ( below).  It was followed in December 1972 by the "Senior Snowball",  an Arts-oriented weekend for older girls centered at Amity House and Gund Hall ,  The council's International Kaleidescope in October 1973, as well as a profusion of  service unit camporees and events. 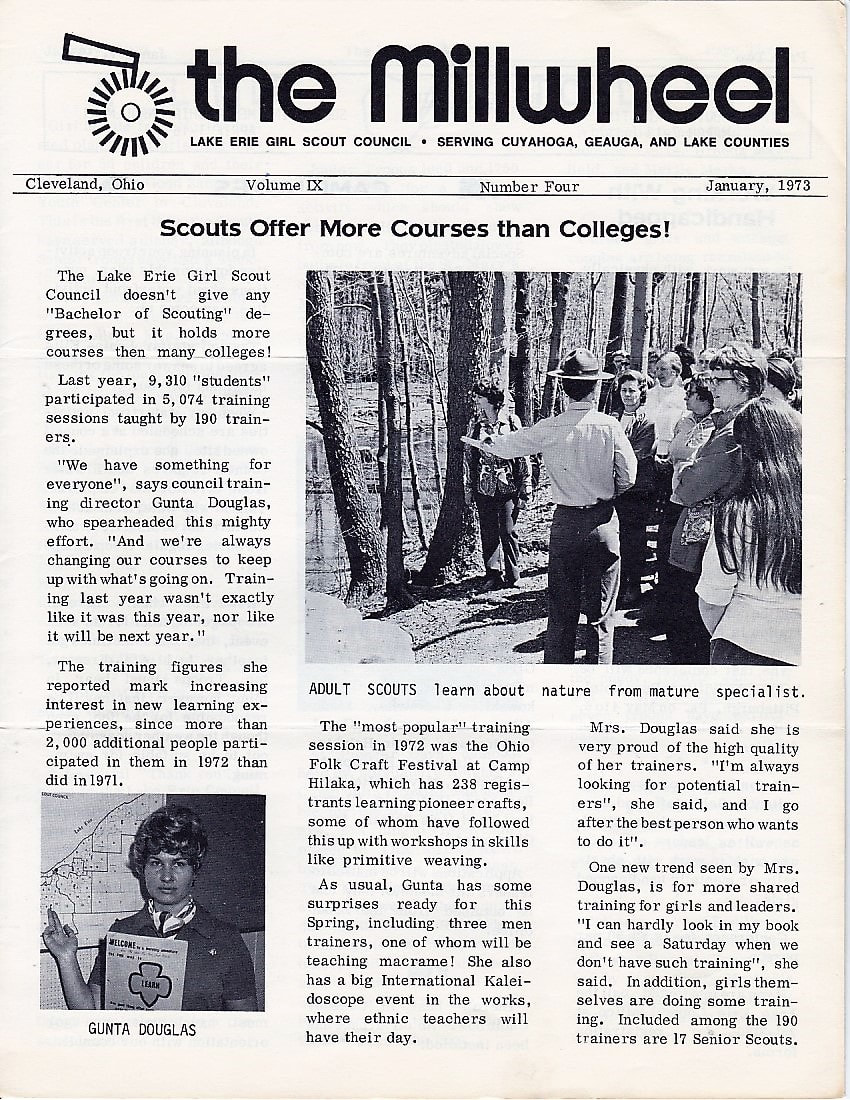 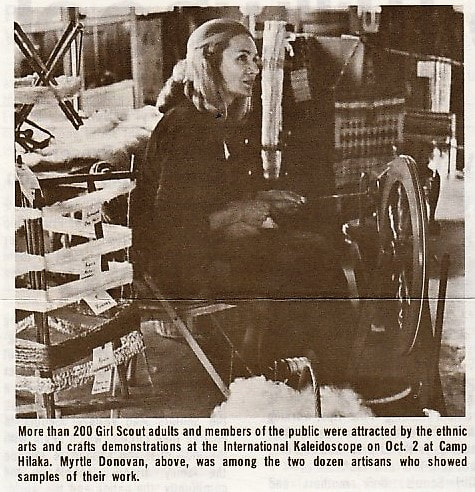 from The Millwheel Nov/Dec 1973 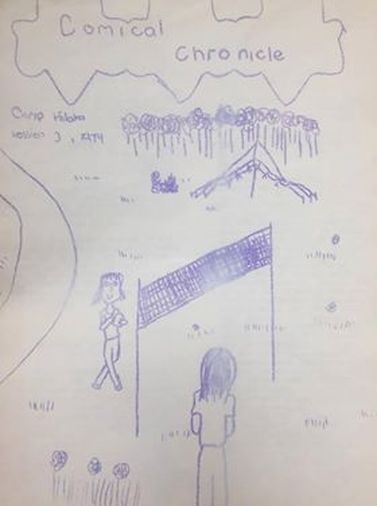 from The Millwheel. February 1976 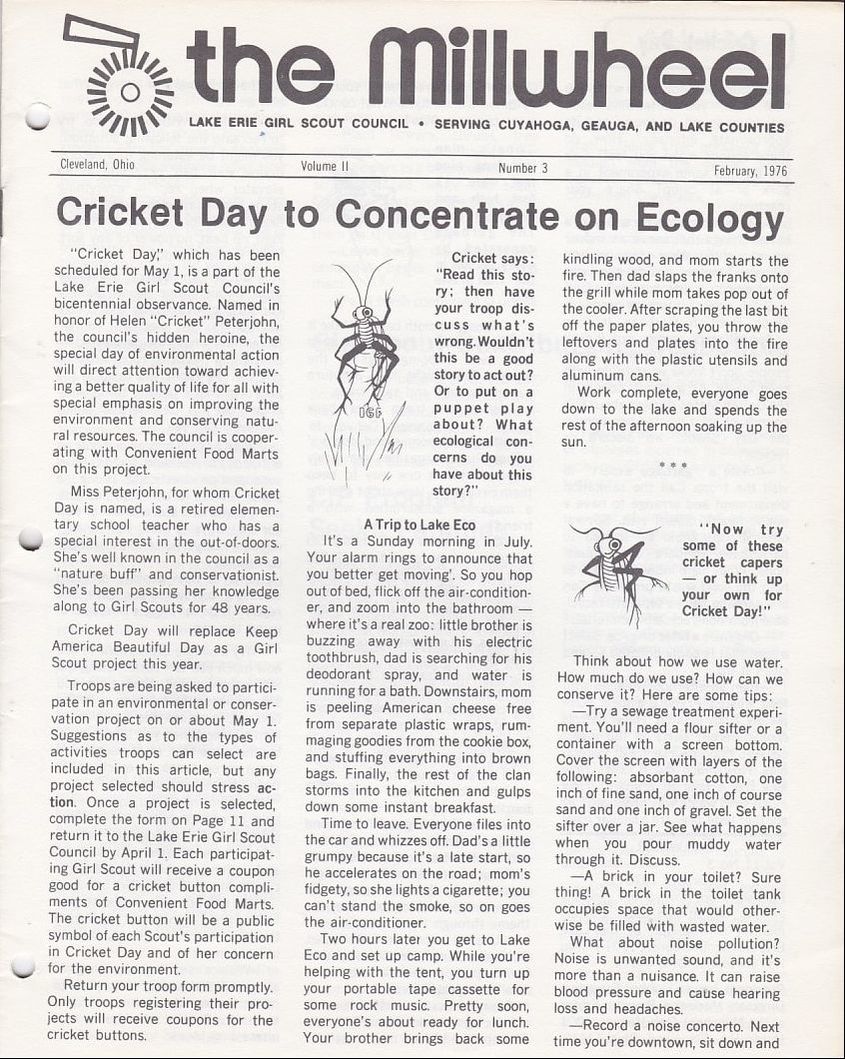 The 1971 report does not mention Crowell or Hilaka specificlaly, but does mention capital projects at Camp Lejnar.
1971 was the first year that Girl Scout troops received a share of the income from selling cookies.  For every 60 cent package of cookies, the troop ( not the individual girls) received five cent "rebate".

In 1972, the Millwheel touted the cookie rebate as a major benefit to troops. 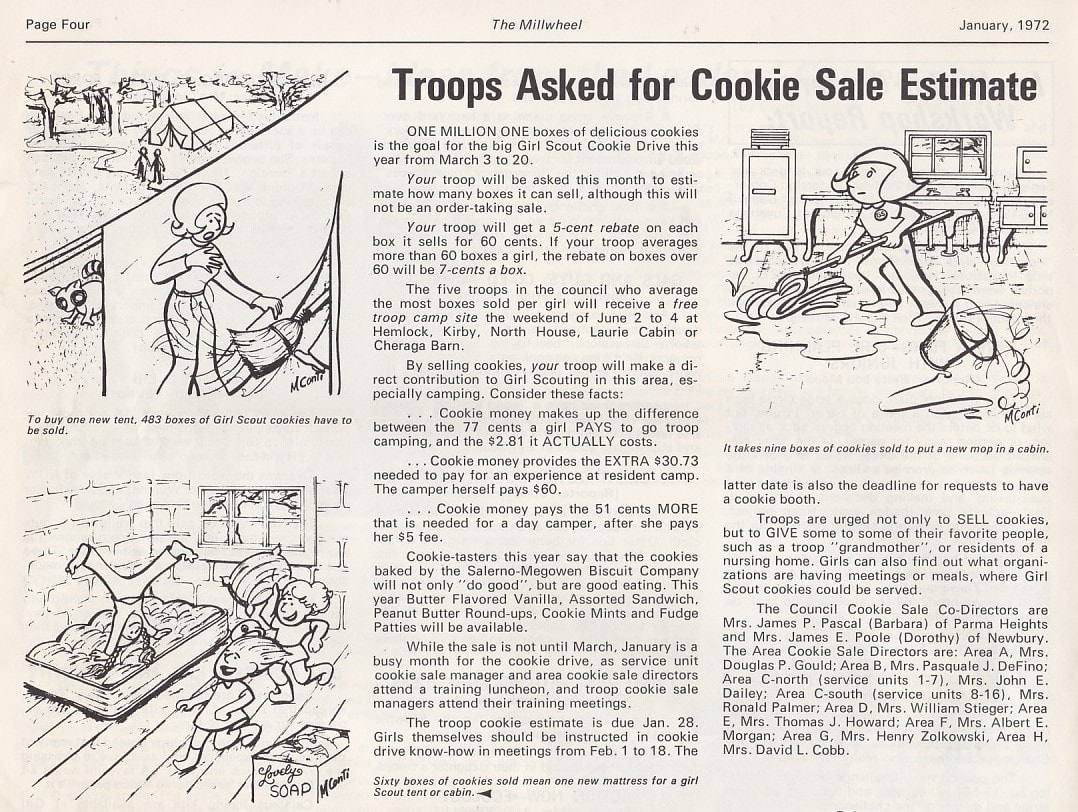 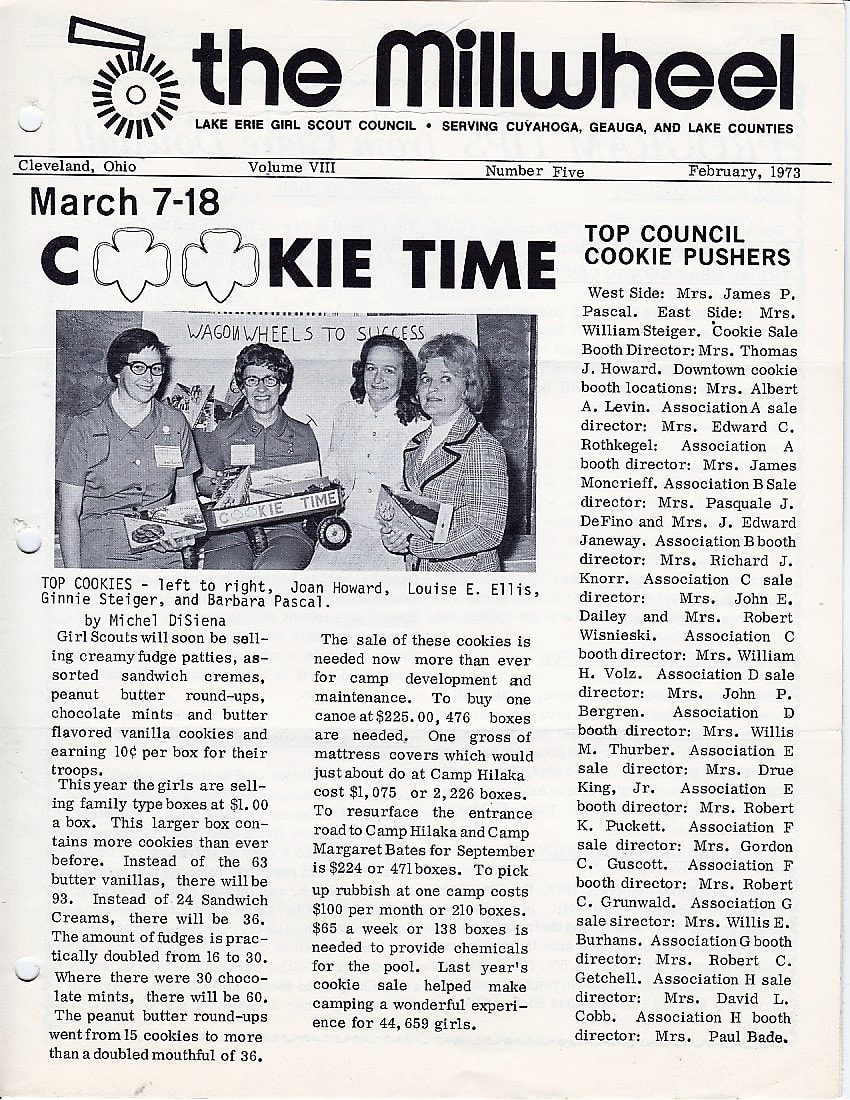 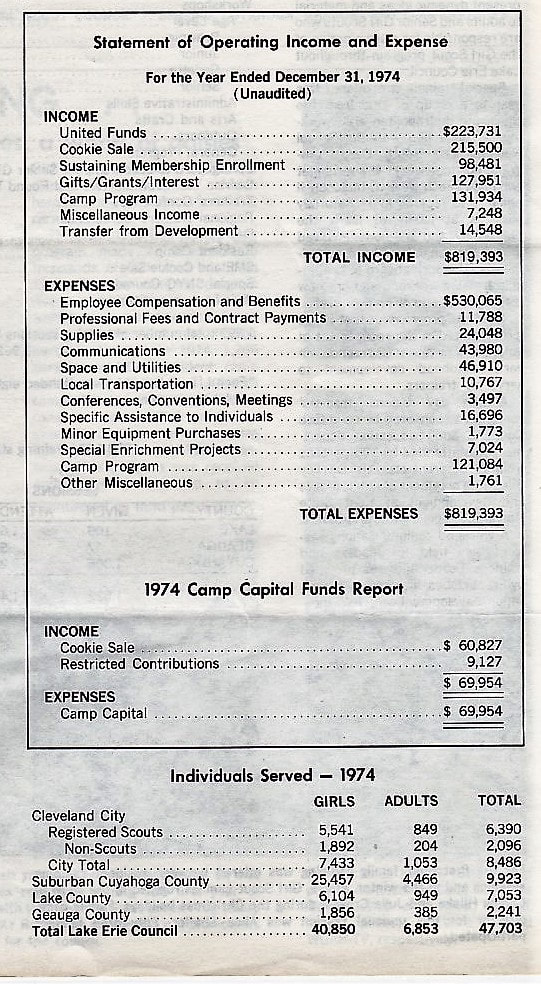