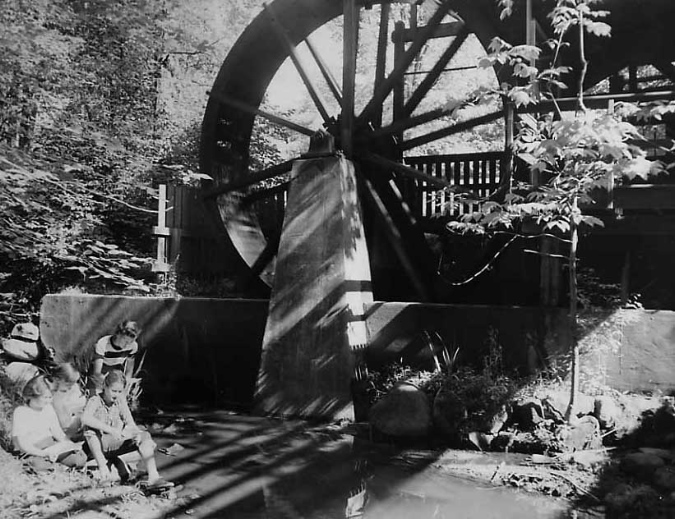 1951 - Girl Scouts begin using Brecksville Lodge and Brecksville Hall. Both were built by the WPA in the 1930’s. Each summer session at Julia Crowell could accommodate 152 girls. Summer resident camp was at full capacity, and the council had to turn away two hundred applicants due to lack of space.

1952 - In spite of high demand for places at resident camp, the council committed to providing financial aid (aka "camperships") to any girl who wanted to come. The CGS board chose to raise the age requirement rather than raise the camp fee or deny anyone the opportunity to camp for lack of funds. Bedford Cabin destroyed by fire and re-built.

1953 -  Capitol Campaign for expanded facilities at Julia Crowell as well as purchase of new campsite. The campaign fell short of the $275,000 goal. Plans for expansion at CJC set aside. Land for Camp Margaret Bates in Macedonia is purchased.

1957 - Neal family sells the last remnant of their orchard property - the central parcel with their homes. Cleveland Girl Scouts buy it.

1959 - 486 girls attend summer camp at Margaret Bates, 727 at Julia Crowell. Both camps together require about 80 volunteers. Euclid Service club builds and donates Intergrove Cabin at North Chagrin Reservation. It is ready in Fall 1959. 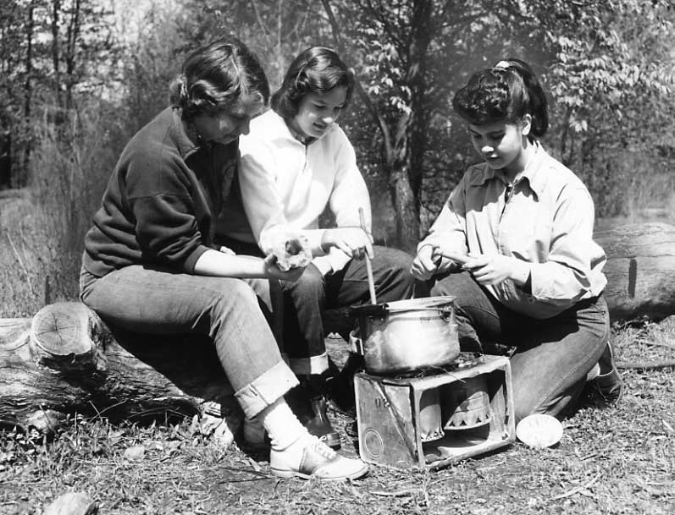 Julia Crowell Work Camp. ​The responsibility for opening camp is being shared by Senior Troops all over the city with the Established Camp Committee.  At least 100 girls and their fathers are needed at Camp Julia Crowell on Saturday, April 23 from 10-4 to help do all the jobs involved with opening camp for the summer season.

The support of Senior Leaders is needed in helping their Senior Inter-troop representatives recruit girls and their fathers for work camp.

New Primitive Unit for Older Girls at Established Camp. This summer girls who apply for the primitive unit at Camp Julia Crowell will have the experience of selecting their own unit suite and building their own primitive home. Skanowunde will be used as a unit for older girls during the first two sessions. As a regular unit in camp, girls will be assigned to it on the basis of expressed interest and past camping experience.
This issue of The Millwheel, January/February 1952 is the oldest in the GSNEO archives. 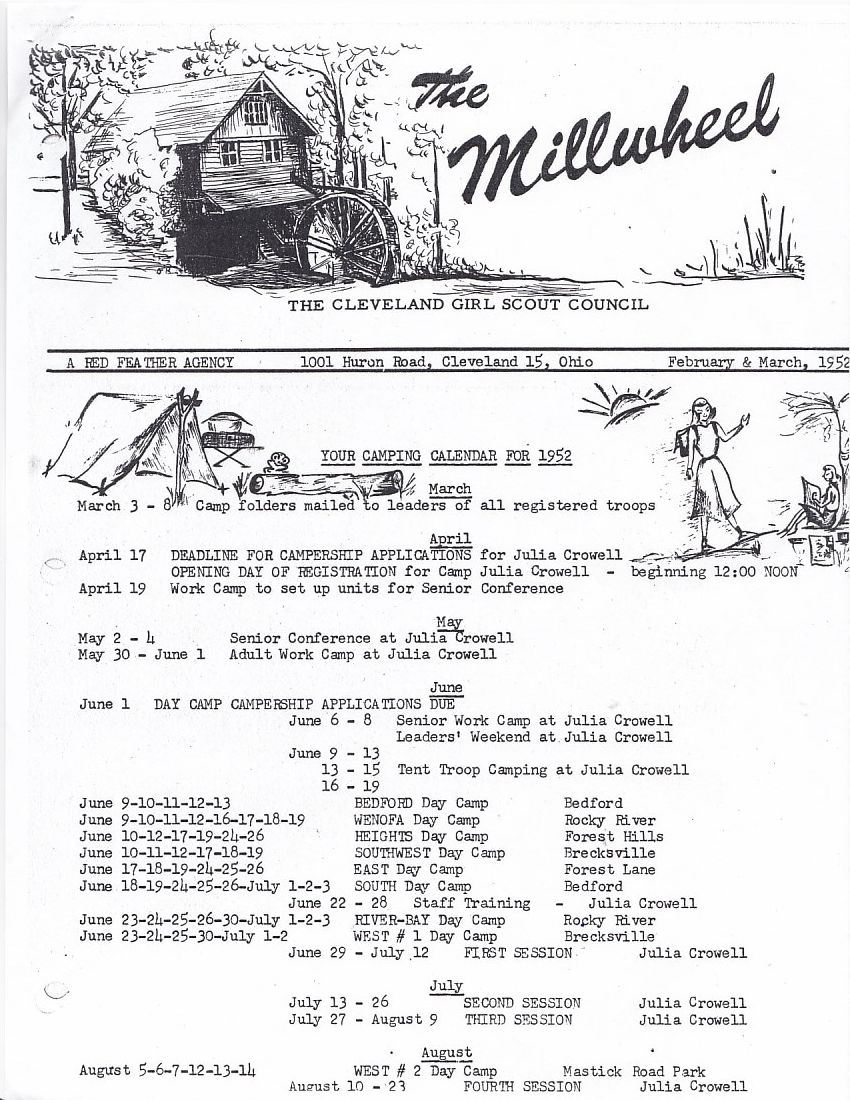 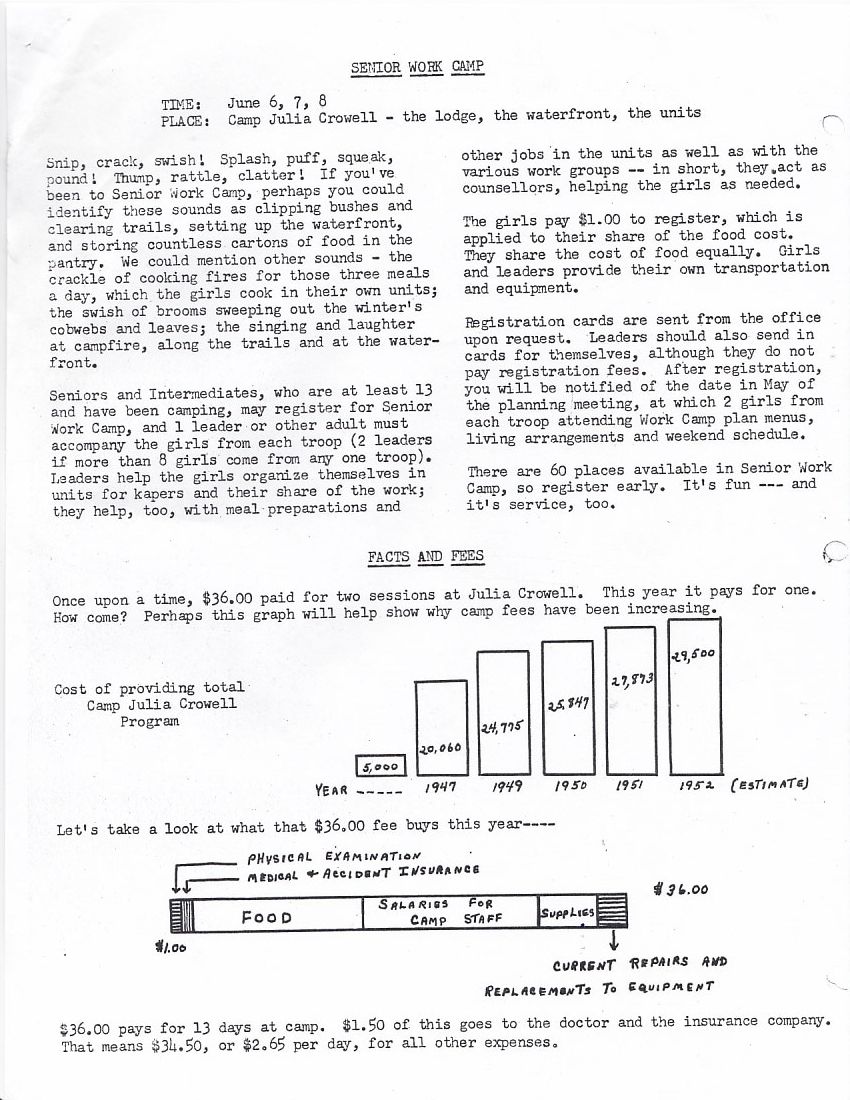 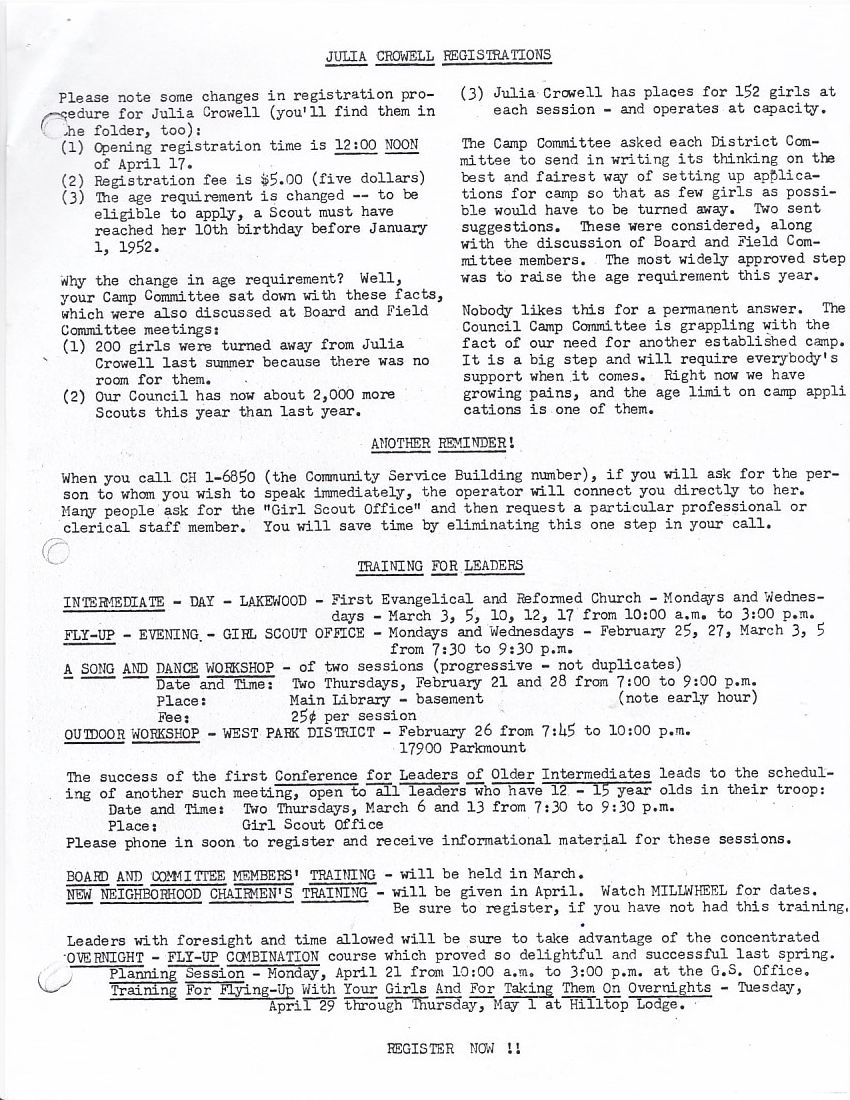 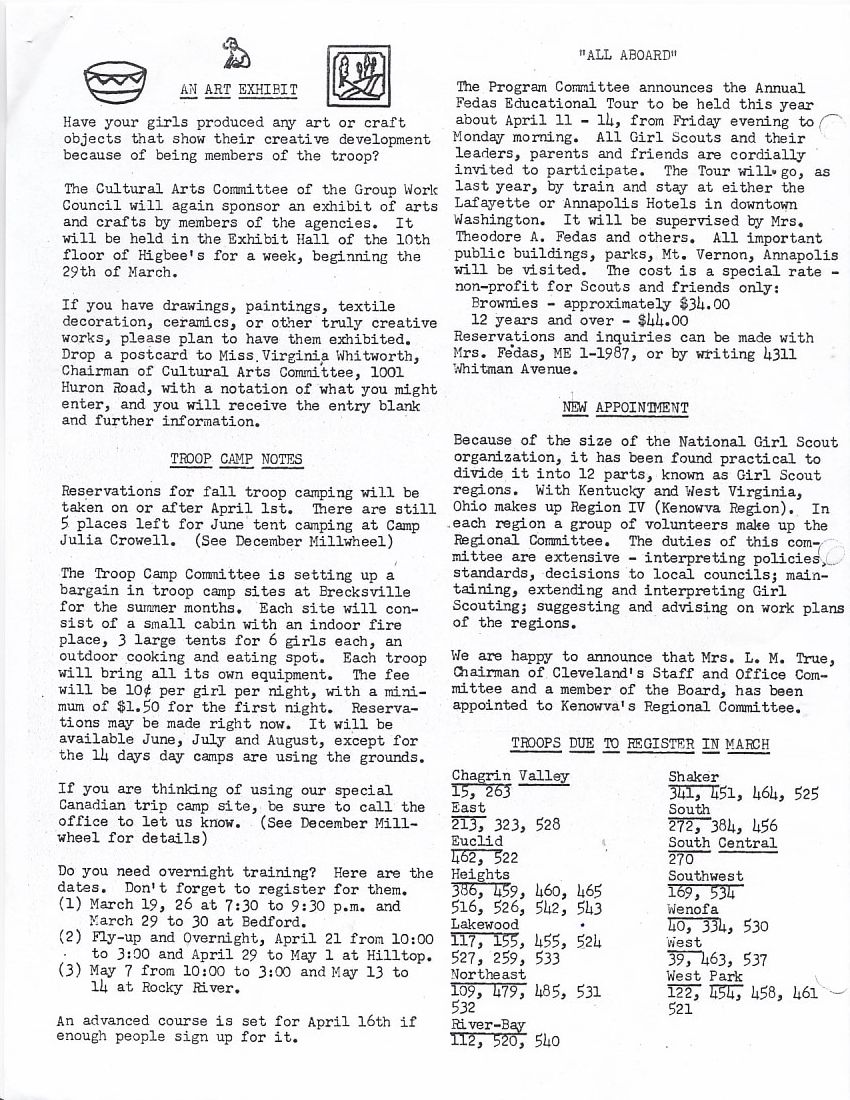 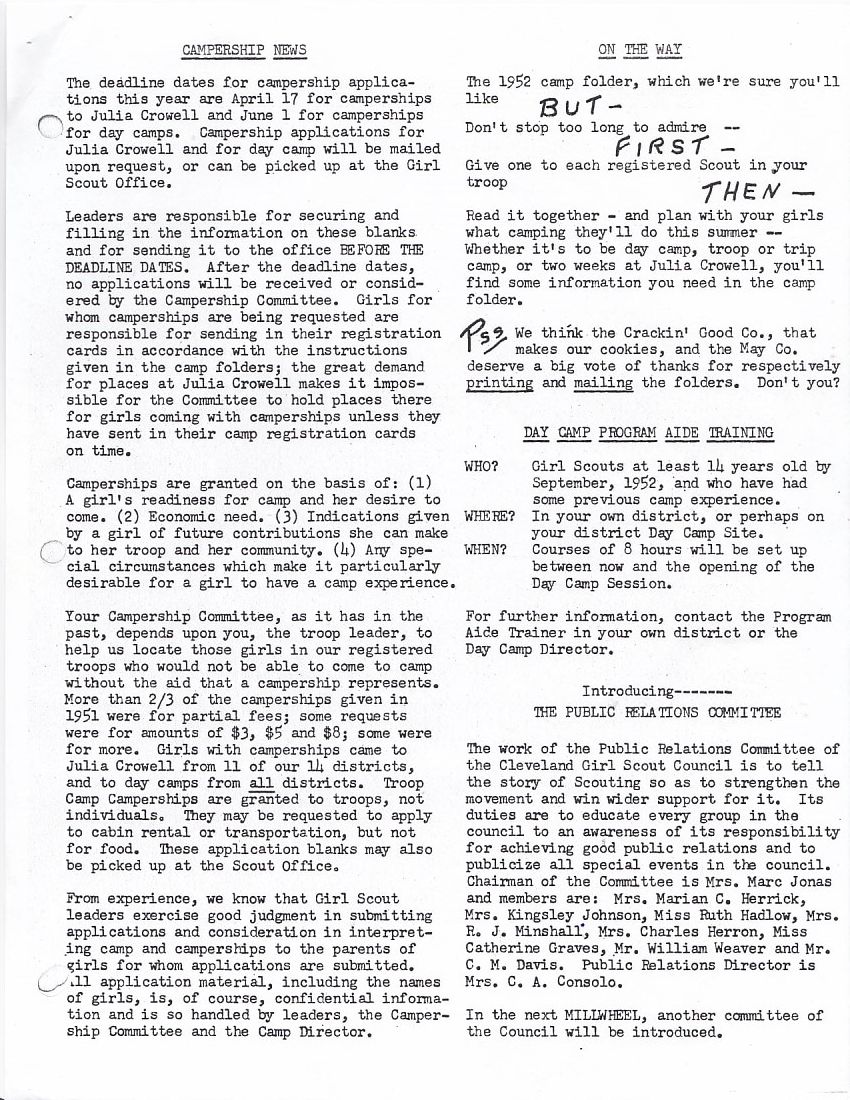 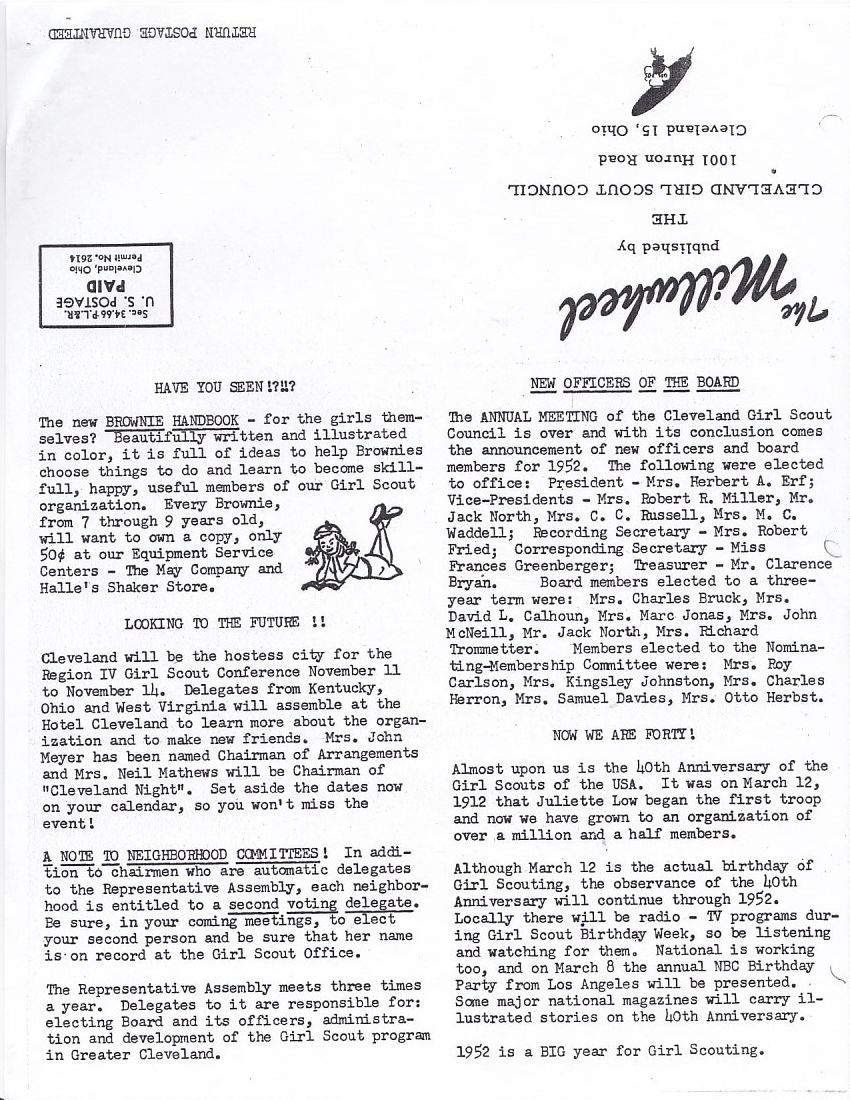 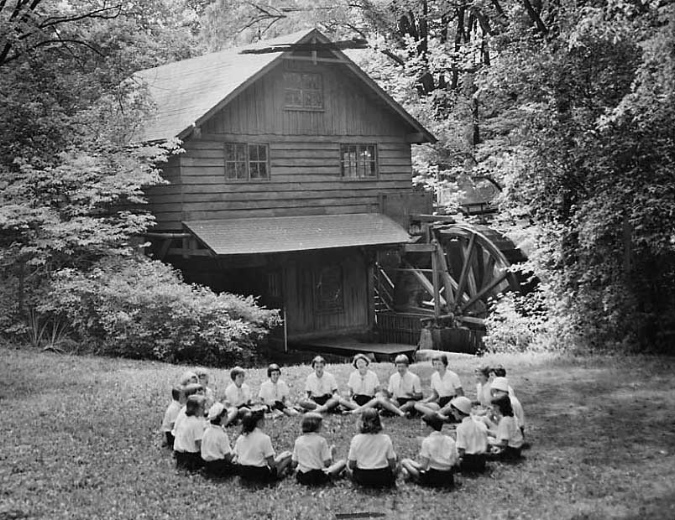 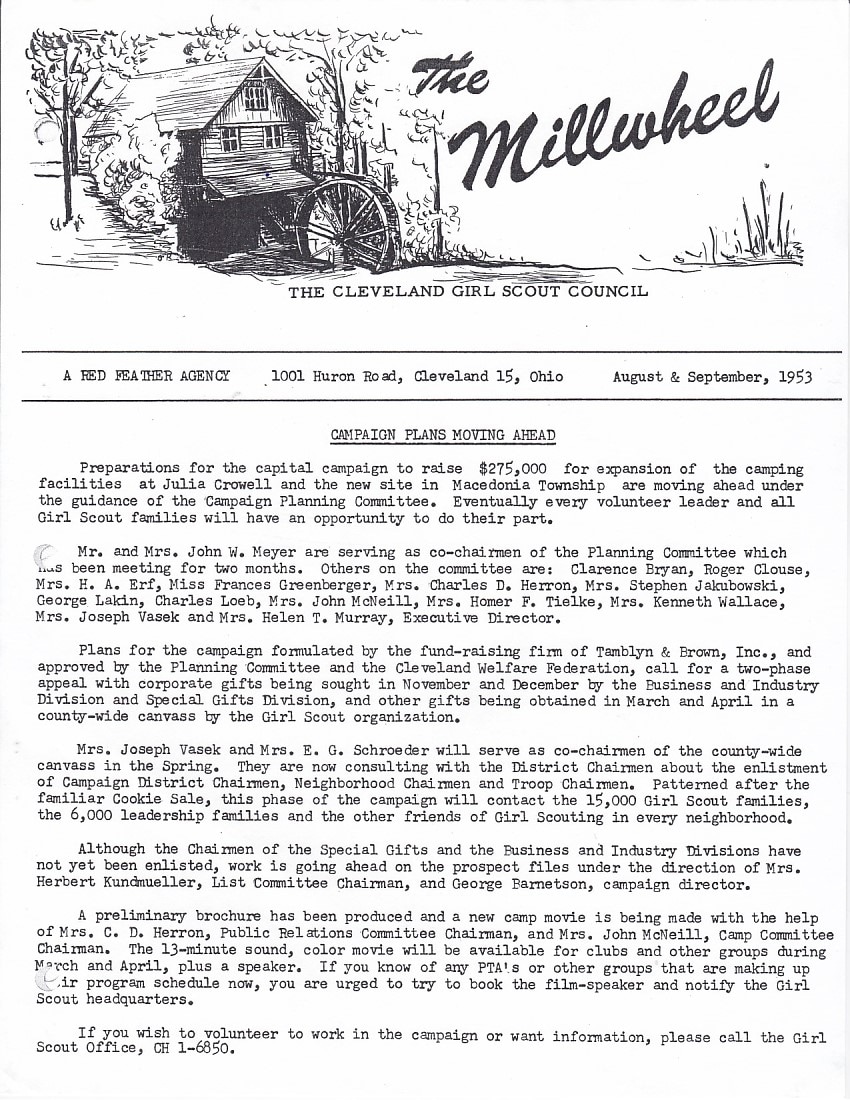 Is it that the cabins were more popular than tents throughout the year?  Or that Winter camp was in demand? Amity (aka South House) was an adults-only meeting and retreat facility. 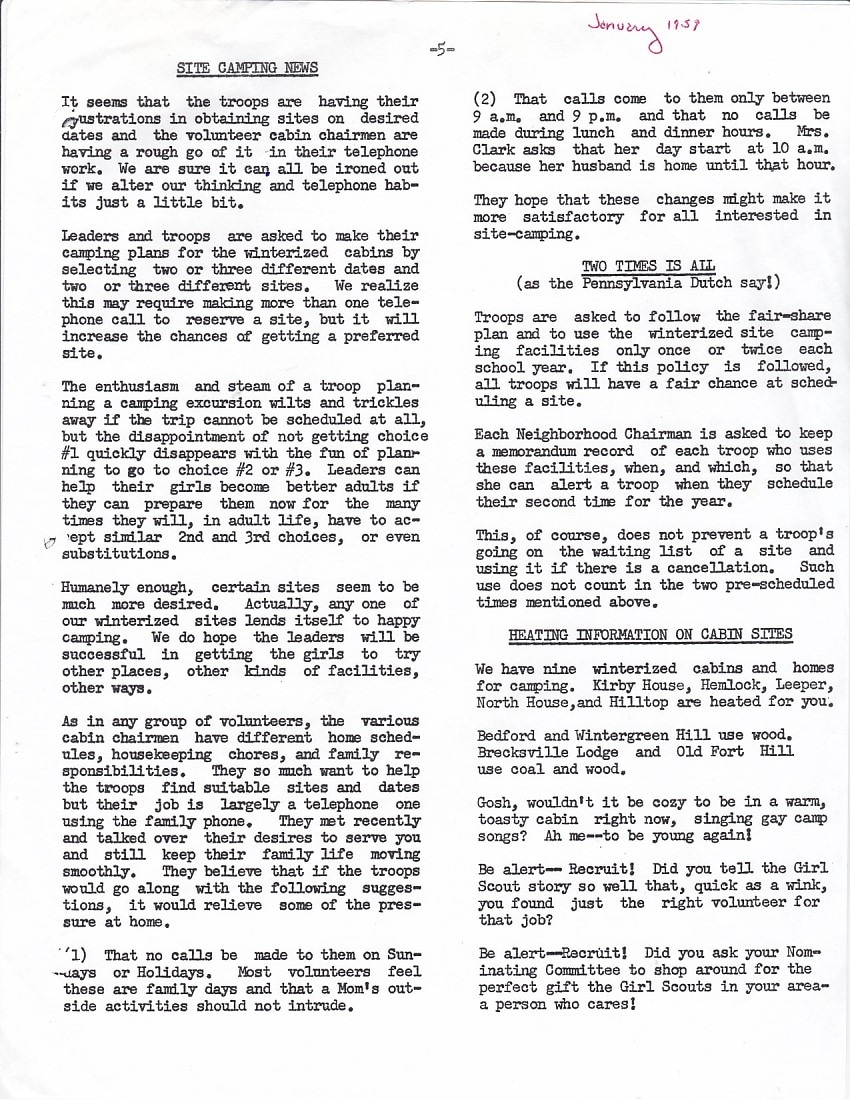 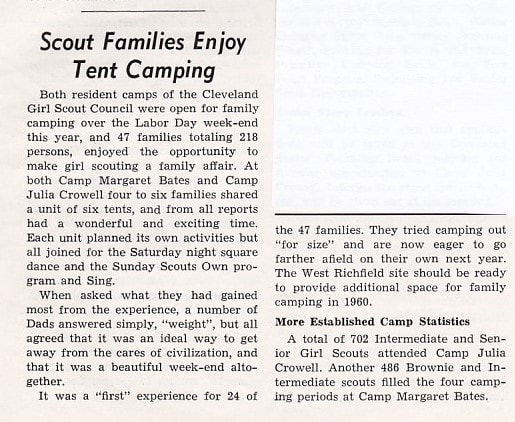 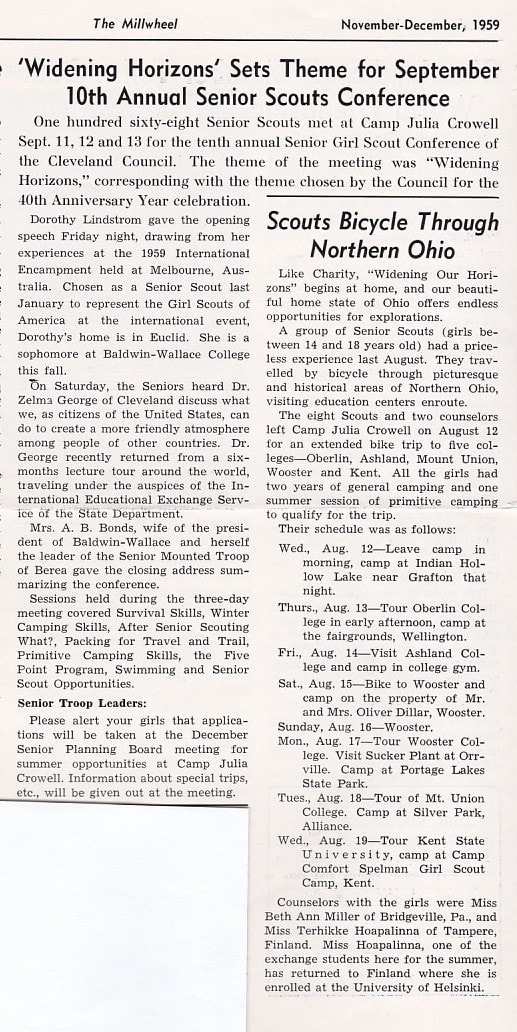 Photos from the Cleveland Press Archives