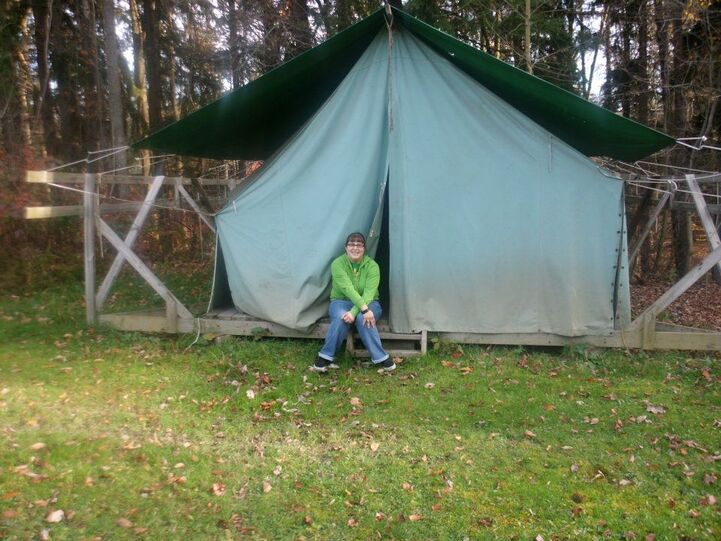 Dear Camp Hilaka,
I started this letter out writing to Faraway Pines, but too many meaningful things happened at other areas of camp as well. I called you home for at least a week every year for nine years of my childhood. I then chose to call you home again for three summers of my adult life. These times were extremely difficult for me, but looking back on them; they were some of the most memorable times of my life. Here are some memories that stick out in my mind that will always remind me of all the places at camp.

Mabel Smith and Ropes Course: As a child, I always felt like an outsider. I felt that nobody liked me or wanted me around. I learned at an early age not to trust people. The fist time I went to Maple Smith for some co-op games and then to try out the low ropes course, I was terrified. This was a time when you had to work together as a team, and have complete trust. I tried to get out of doing the trust exercises, but one of my counselors talked me into it. I came to realize that you can trust people, and if I opened up people would listen. When I was a counselor in training, Spazz! took us to the high ropes course. I was never scared of heights, but I was always afraid of being a failure. I didn’t think I could do it. I pushed myself, and Teddy pushed me, and was able to gain some faith in my abilities.

Hickory Hill: My first time at camp, I stayed at Hickory Hill. I had never been away from home for more than a night before. I had never slept outside. It was a very new experience for me. One thing I remember about that week was I learned at a young age about religious tolerance. I was raised Catholic, and went to a Catholic school. Our teachers would teach us that anyone who was non Catholic was evil and would never go to Heaven. One of the girls in my tent that summer was Jewish. Upon meeting her, I remember thinking, “I can’t be friends with her, she’s evil.” After talking to her, I realized how stupid that idea was. I started thinking for myself, and realized that just because someone was not of the same religion, did not mean that there was anything wrong with that person.

Lake and Boat House: One of my favorite parts of camp was closing campfires. They were always so moving. I would always have a peaceful feeling when walking down the road in the dark and it was lit with candles. I always ended up crying by the end of night. The one I remember most was one year when I sang Time of Your Life by Green Day to my campers. My first year on staff, I even got to be part of the ceremony. It was an amazing feeling canoeing over from the island and lighting the floating camp fire.

Mill: This is a fuzzy memory for me, but one that has stuck with me. I remember for an All Camp, we were read Tagger Tails, and sent on a Tagger hunt. I thought a Tagger was a real animal as a kid, and really wanted to find a Tagger. I can’t remember anything about these stories, but for some reason I’ve been trying to search them out for about four years.

Faraway Pines: I have so many memories about you. This is the camp site I stayed at the most as a camper, and spent two of my summers as a counselor here. My first memory was from when I was a camper. We had an All Camp at Faraway Pines to play Capture the Flag. I’m overweight and have asthma, so needless to say, I’m not very athletic and don’t like to run. A counselor found me hiding behind a tent, crying. She sat with me and talked to me. She got me a bottle of water, and found me a job I could do in the game so I wouldn’t have to run so much.

My second memory was from the first year I was a counselor. One of my campers had been feeling extremely homesick and we were actually considering calling her parents. One night I sat down in the shelter and talked to her. I asked her if she had seen the movie An American Tail. It happened to be one of her favorite movies. I had her remember how Fivel was so sad that he was separated from his family. He looked up at the moon and started singing Somewhere Out There, and then it cuts to his sister looking up at the moon singing the same song. I told that camper that just like Fivel and his sister, if she looks up at the moon; her parents are looking up at the same moon. We ended up singing the song together, and she had a wonderful week at camp.

Dining Hall: I know it’s kind of strange that this is a place that sticks out in my mind. This was where I found acceptance from my peers. My birthday was coming up during my last year working at summer camp. The previous years, my birthday was not remembered, but this year was different. One counselor that I had always looked up to and looked to for acceptance gave me a card and a teddy bear. I still have that teddy bear, and it always makes me smile when I see it. Another counselor who I had had a heart to heart talk with, gave me a card and a book about growing as a woman. I never felt comfortable as who I was, but the book helped me to embrace myself and grow.
I know there are more memories, but these are the ones that stick out in my head. Camp was a growing experience for me. Looking back on my years there, I now realize how camp helped me to become the person that I am.

Aubrie Ryniak
Butterfly 1996-1998
Ewok & Wakko 19
Aubrie had a true talent for documenting life at Crowell Hilaka with her camera.  She returned for a"last look in 2011, and came back when the camp was briefly showcased during a campaign open house in 2014