My name is Jan Schmid.  I grew up with Scouting in my blood.

Both of my parents, Jack and Lois, had been in Boy and Girl Scouts respectively with my mother earning the Bronze Acorn, the highest award in Girl scouting at that time*.  Additionally, they volunteered to be den leaders and assistant leaders, cookie chairs and assisted where needed with any of their four children’s troops. (I always liked it when my mother was the cookie chair!).

I started Scouting in third grade as a Brownie.  My troop leader was my classmate’s mother, Mrs. Burns.  At that level we were not permitted to go camping at Camp Crowell (Hilaka was not part of Lake Erie Girl Scouts at that time) but did have craft activities and occasional cookouts at a local park.  Brownies only went from second to third grade and then Brownies “flew up” to Intermediate Scouts. (the Intermediate Scout name was changed along the way to Cadette Scout).

In Intermediate/Cadette scouts we had a handbook that provided information on everything we needed to know and learn at this level.  It introduced a brief history of scouting; provided the Girl Scout promise, laws and information on earning badges and the First Class rank which was prestigious to add to our badge sashes.  Mrs. Glazer and Mrs. Knuth were our troop leaders guiding us through this level. The Cadette level provided new privileges of attending one day activities at Camp Crowell and camping one to two times a year in the floor tent units,  depending on availability.  We hiked many of the paths throughout Camp Crowell but the best was going to the Mill.  It was so neat to go across the bridge and check out the Mill wheel.

Finally, on to Senior scouts where we drew from the culmination of everything we had learned and experienced. Badges were a thing of the past. Now we worked on earning program themed colored enamel bars.  Some of the Senior scouts worked at summer day camp assisting leaders with their unit activities and helping where needed.  I had signed up to assist a day camp in Brecksville, Ohio where I met two new leaders, Mrs. Alvarez and Mrs. Raimer. They were going to become troop leaders in the fall for their daughters’ troop from St. Bridget’s in Parma, Ohio.  After summer day camp was over, I was asked to continue to work with their troop.  One of our activities was going camping for the weekend.  We were assigned Coach House by the Council office which was a great first time experience as it was indoors.  The scouts planned their activities, meals and badge work for the weekend.  It was a great time and, of course, hiking. The camp provided an opportunity for them to see what it had to offer so that they would have an interest in returning. I believe we also had other camping weekends but I don’t remember where we stayed.  Nonetheless we always had fun!

As a senior scout I could sign up for activities initiated from the Lake Erie council office.  One that I chose to attend was learning how to canoe and all it involved.  In addition to the strokes, I learned how to bring the canoe into the dock for a landing without ramming the dock, how to tip the canoe over and get it back while it was full of water and how to paddle to shore using my hands.  The course was taught by the Red Cross and was held for two or three weekends in a row.  We stayed in Beech Cliff just up from the lake.  One night, probably the first weekend while we were there, they had a get together at Garfield Hall.  It was a meet and great to get to know everyone and “dance” on the floor that was built on railroad springs.  If I stood in one of the corners of the room when everyone was dancing, I could actually see the floor move up and down. It was really a unique experience!

Our Senior leaders, Mrs. Davis and Ms. Jennings, basically guided us and provided information from the council office regarding opportunities throughout the United States that we could apply for and/or volunteer our time and talents. Another perk at this level was that Senior scouts were given the privilege of camping at Amity house without the leaders. That was an exceptional privilege as it was used for dignitaries and out of Council guests.  Of course, we were held accountable and always left it better than we found it. By now it was easy to plan menus, do the shopping, set up a caper chart (indicating what patrol was assigned to the activity and carry it out).  We loved it!  Our best fun was sledding down the camp hills in cardboard boxes until we wore them, and ourselves, out!

Last, but not least, the Council office offered weeklong summer resident camp programs.  I had never been to resident camp as it just wasn’t affordable for my family but I had participated in numerous weekend camping programs during my scouting tenure, so I applied for the Counselor-in-Training (CIT) four week program. When the CIT director, Bene’, looked over my application she was very surprised the Council even sent her the application due to my lack of resident camping. However, she accepted my application. (I think just to see what I knew).  Thank goodness I had good leaders over the years that taught me about tenting, fires, various ways to cook in the outdoors and knots, etc.

As CIT’s we lived in the floor tents right next to the gas cut.  I think our unit was named Wonken Tonken and this location made it easy for us to work with units at either Crowell or Hilaka. Although we cooked out often, we also ate our meals at Gund Hall where we supervised each of the square dining tables as either a “head,” the overall supervisor of the table and the person dishing out the food or a “foot”, the individual pouring the drinks for each person at the table and the person that would take over for the “head” if she had to take care of a situation or an emergency.  All individuals at the table had to eat some of everything served. If they didn’t like something, they were given a “no thank you helping” and were expected to at least try it. The CIT’s also led songs once the meal had been completed. Our CIT unit was outstanding! It was a fabulous opportunity and one that I will always remember!

After graduating from Girl Scouts and becoming a counselor, I applied to work at GS camps.  I accepted a contract at Camp Unalia in Rock Creek, Ohio as an assistant unit leader for a year or two and then became the Waterfront Director.  I was also asked to stay on to assist with the Cadette Round up which was also held at this location.
​
Summary:
In Girl Scouts I met new people and became friends with many. My fellow girl scouts all pitched in and worked together, had fun while learning many different skills that everyday life doesn’t teach. To this day when asked about my Scouting experiences, the memories return of the people I met, the things I learned and the fun I had. Do I think it was worth it? My answer is always a resounding, “Yes, definitely!”


Background
Jan Schmid grew up in Cleveland, Ohio.  At a young age she moved to Parma, where she continues to live.

Colleges and /or Universities: Professional Experiences:
* The Bronze Acorn is been mentioned in news clippings from Pennsylvania in the 1940s as "the highest award in local Girl Scouting"
Jan's mother, Ruth Ann Evans is featured in the article below. 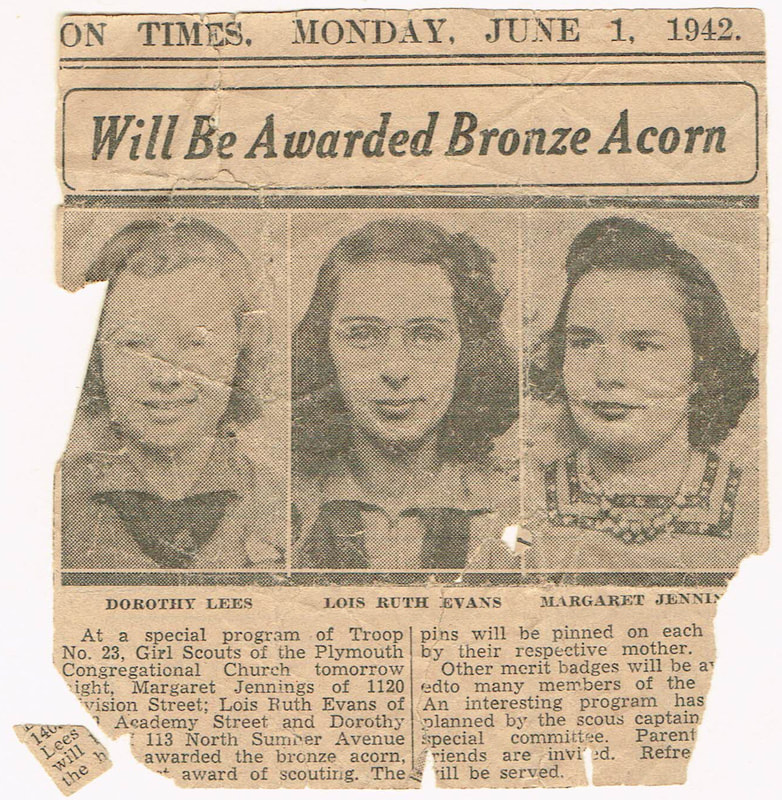