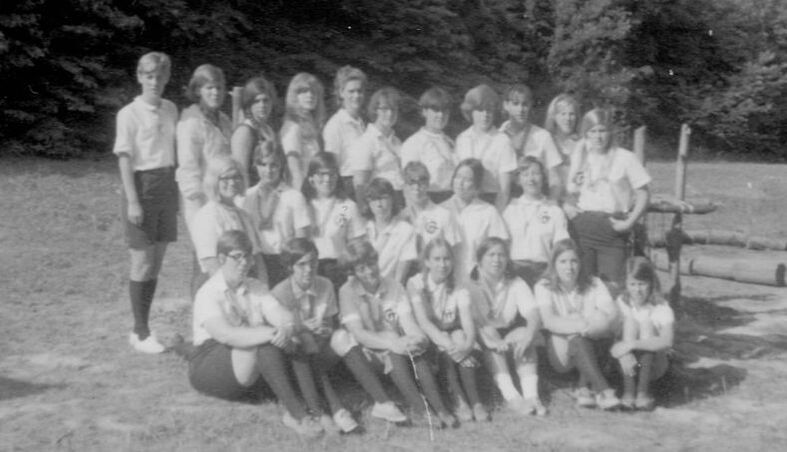 Christine is pictured in the middle of the middle row (fourth from left) in her CIT (Councilor -In-Training) unit. 1967

"This is the story about how I found myself, somewhere on the camp road between Gund Hall and Faraway Pines at Camp Hilaka.         I had just turned sixteen years old when I was away from home that summer, up in Ontario Canada on a scout canoe trip. It was 1966, and the huge bewildering world around me was in turmoil.  Racial riots, The Vietnam War, angry politicians….. everything was changing.  It wasn’t the first time I had been away from home.  But I felt like I was a shadow of my parents, and was not yet an individual on my own. Who was I?  I didn’t know…..

"My parents were both extremely intelligent. My mom was valedictorian of her high school class, and never had the chance for college because World War II got in the way.  My whole life, I never managed to beat her at Scrabble.  My dad was an engineer and brilliant mathematician, part of the Greatest Generation.  I knew that I had inherited brain power from them, but using it had eluded me. Don’t get me wrong. I got good grades, better than good. I had been inducted into the National Honor Society.  I was a girl who could do math. I played the piano like a protégé, and was also an oboist in the Cleveland All City Orchestra and a junior member of the Cleveland Orchestra.  I didn’t exactly fit in with my peers. I was just way too smart for my own good and all those brains just got in the way. I had a sense of being a little different than a lot of my peers. Despite those positives, I often felt unsure of myself.  I didn’t have a lot of ideas about where my life was headed.  Who was I? I wasn’t too sure.

"It was a beautiful summer day.  Green woods, golden sun, blue sky.  I’m not sure why I was alone on the camp road.  Maybe on an errand, but I was alone, thinking about myself and my life.  All of a sudden I felt like I had been hit by a bolt of lightening.  It really was that dramatic. It was like the wide world, with all its excitement and opportunities, opened up before me.  It was the first time I felt that I had life possibilities, and that I was more than just a scraggly girl. I’m not sure how that magic happened that day, but by the time I reached Far Away Pines, my head was in the clouds about all those possibilities. I felt like I was sitting on a powder keg, and I didn’t know who had the match!  Somehow for me, scouting had a lot to do with helping me figure out who I was.  Of beginning to understand what I was capable of, and how I could proceed into my life with excitement and anticipation of what was yet to come.  Was it the lush greenery along the road? The brilliant sunshine?  The wide blue sky?  I still don’t quite get it.  I don’t know.  But something happened to me that day that changed my life. Something just clicked for me.  I became a young woman with possibilities.  The world opened up in front of me!

"It’s strange now when I take that same walk through the camp.  I can’t remember the exact spot that the bolt of lightening hit me all those years ago.  But it still gives me a sense of completeness and accomplishment to walk that way. Its been a joy to rediscover my old Girl Scout camp again after all these years. Standing at the display board by Gund Hall one day, another visitor admonished me not to get lost if I was hiking that day.  It made me chuckle inwardly.  Lost at the camp???  No, I don’t think so.  It was where I found myself on that long ago day.

"Who did I become?  In 1968, I applied to the College of Veterinary Medicine at Ohio State University and was rejected because I was a young woman.  I graduated from Kent State University in 1972 as an Early Childhood Education Professional.  I went on to earn four teaching licenses in Early Childhood Special Education and became a Developmental Specialist. I earned a Masters Degree. I became Director of the first Early Head Start Program in Cleveland when the grant I wrote was awarded $2.5 million dollars to provide services to eligible newborns and 0-3’s. I created three new Early Childhood programs over my career.  I became a Girl Scout Leader.  I took a social work license in 1998, and began working in an early intervention program for children with severe emotional and behavioral issues.  For twenty years, until my retirement, I tried to make a difference in the lives of kids with big problems.  It all started on the camp road."
​
Christine Pekrul Stark, 2021.
​ 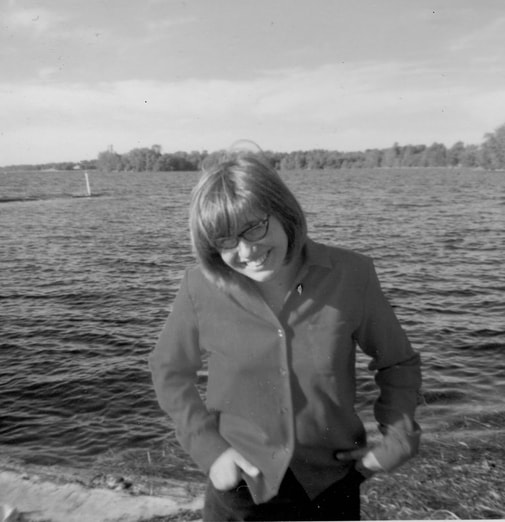 Valerie, the Ojibway storyteller who inspired the name of Waken Tanka which later became Wonken Tonken.
How Wonken Tonken got it's name.

I’ve taken a little time to reflect on my memories from the summer of 1967. I turned 17 that summer and was a CIT at Hilaka. I am now 70 years old, so I’m trying to fill in some of the blanks about that long ago summer. Here’s what I remember.

There were a handful of us girls who entered CIT that summer after being on a canoe trip to Ontario the previous summer, so we knew each other pretty well already and had a shared history of canoe trip. We were camped in the gas cut, just off the main camp road, about half of the distance to Mable Smith Shelter. I know we had a latrine, but we may not have had water there yet. We did not eat in Gund Hall a lot of the time. We cooked on our outdoor campfire a lot of the time. We were using 2-person trail tents, no platform tents there. We built a fire circle. We had a wagon and hauled rocks from the creek. I know we had picnic tables and a dining fly over the tables.

Those of us who were on canoe trip remembered the visit we made to the Whetung Ojibwa Craft Store in the Kawartha Lake Region of Ontario. It was in the Curve Lake Indian Reserve. We spent the day there. That evening, a young Native American woman named Valerie came to our encampment for our evening fire circle. She was quite a storyteller, and we were captivated. I wish I could remember that campfire circle in more detail, but I believe it is where the topic of Waken Tonka first popped up, probably part of a story she told. The next summer when the girls were together again, we named the new tent unit Waken Tonka. I believe that the inspiration for that name came from our friend Valerie, and from those campfire stories.

One funny memory that popped up was about my boots. I had pounded some sticks outside the back of the tent and put my boots on them, just to keep them out of the way and dry. The day it rained and I tried to put them on, my foot wouldn’t go into the boot because there was a mouse nest inside. The baby mice fell out onto the ground between our sleeping bags. The mama mouse came and took them away one at a time. Oh well... I digress.....

I will always remember my first visit back to the camp when it first became the Richfield Heritage Preserve. I had just had a total knee replacement and wasn’t quite up to walking that far yet, so Clive took me for a little ride in the golf cart. When I saw the sign on the shelter and it said “Wonken Tonken” I thought to myself, “ I wonder how that name morphed itself into that name??” Like the old game of telephone, where a whispered message changes over time and repetition.
​
About cooking
​We were learning and practicing some different kinds of cooking. We used to plank fish and steak. We did baking in reflector ovens. Banana bread, corn bread, birthday cake.... We made one pot meals. One experimental meal was to dig a 2’ deep hole, (Called a bean hole?) fill it with hot coals, and put raw chicken and veggies into a covered wrought iron cooker, cover it up with soil for the day, and return to dig it up for supper. I remember the chicken was cooked, but it looked raw. We ended up throwing it on the grill because no one wanted to eat it the way it was. We learned a lot.... we had a well oiled caper chart too. We took turns with everything.
Enduring friendships
I graduated from scouting, along with most of those girls [in the CIT picture at the top pf the page], in June of 1968 at a city wide graduation event at The Old Stone Church. I see two of my dearest friends in that group picture. Jeanie Hoskins, and Molly Schwartman. Jeanie and I were in the same senior troop and in the same high school. Molly was my paddling buddy on canoe trip. I lost track of Molly. Jeanie went on to take a PhD in Textile Arts, She worked for Macy’s for a long time. But I haven’t heard from her in years.

There were 11 girls in our senior troop. Of the eleven, I am still in contact with five. Seven became college graduates. Two, Jeanie and myself, also took graduate degrees. Two became nurses.Two became teachers. One had 10 children! Friendships that have lasted a life time. ("A Girl Scout is a sister to every other scout").