In spite of having opened Camp Margaret Bates in 1955, as well as the Neal property adjoining CJC, there were still not enough campsites for all the troops who wanted to camp - as evidenced by this Millwheel article from May/June 1963. 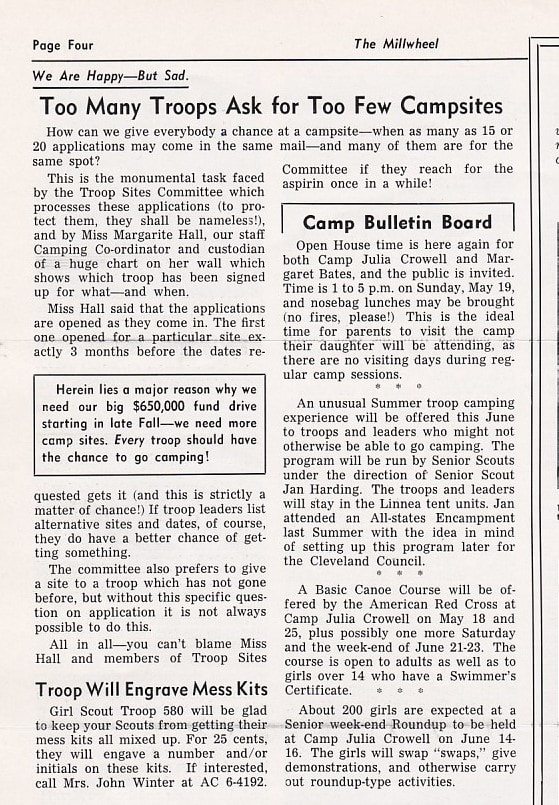 Besides needing additional camping sites, the council recognized they needed additional services. The top priority was a water and sewage system at Camp Julia Crowell.

The September/October 1962 issue noted (on page 8) that The Welfare Federation of Cleveland approved the fund-raising drive to expand and improve campsites. In addition, Mrs. Lois Burke was named to implement the Council's three-year program to intensify Scouting in the Hough area under a $30,000 Cleveland Foundation grant. 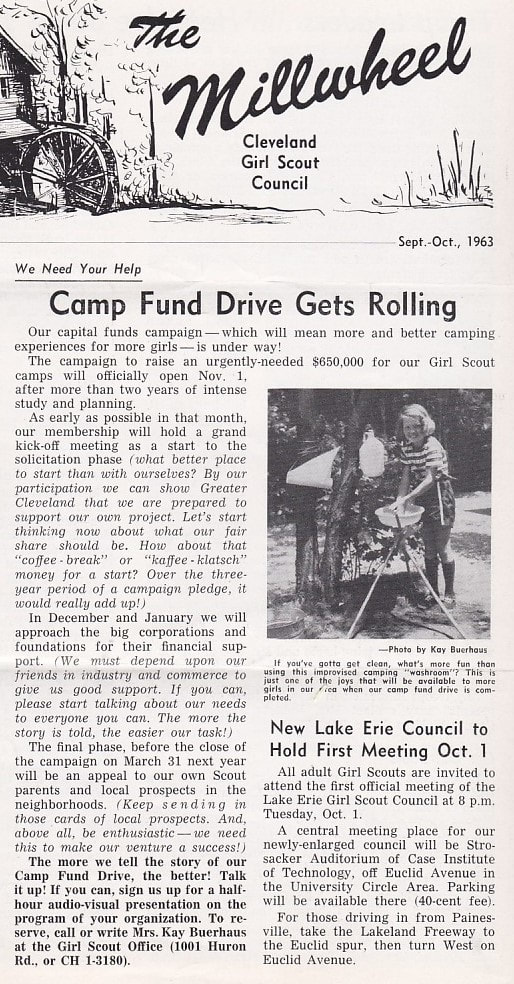 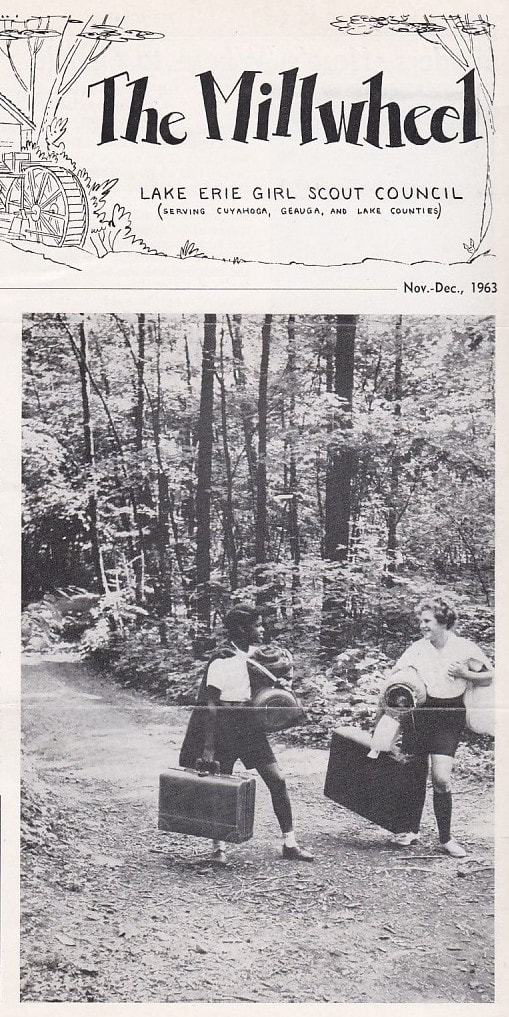 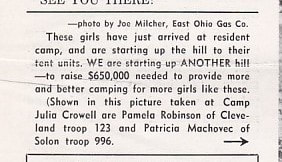 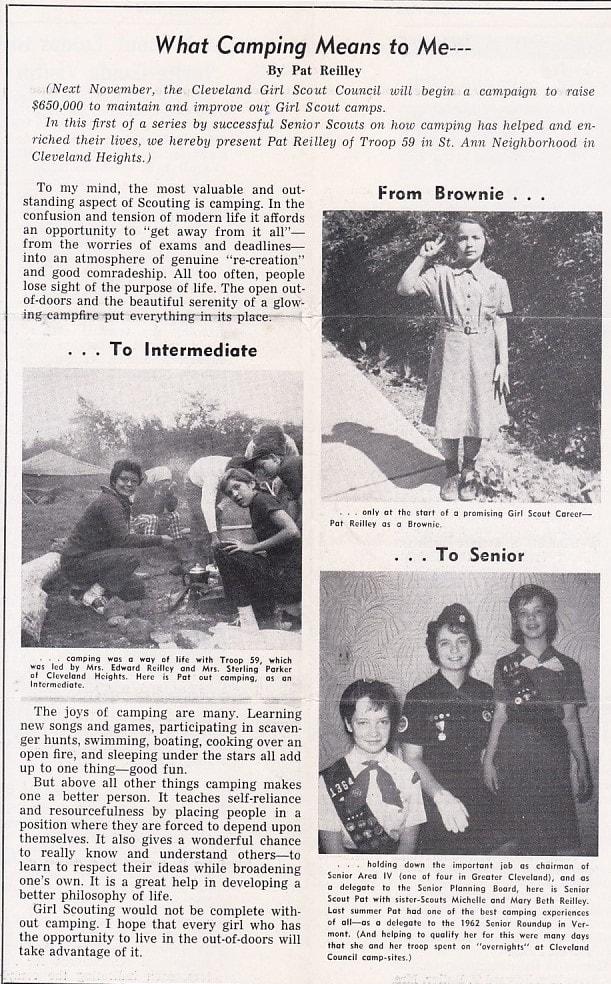 from The Millwheel, March/April 1963 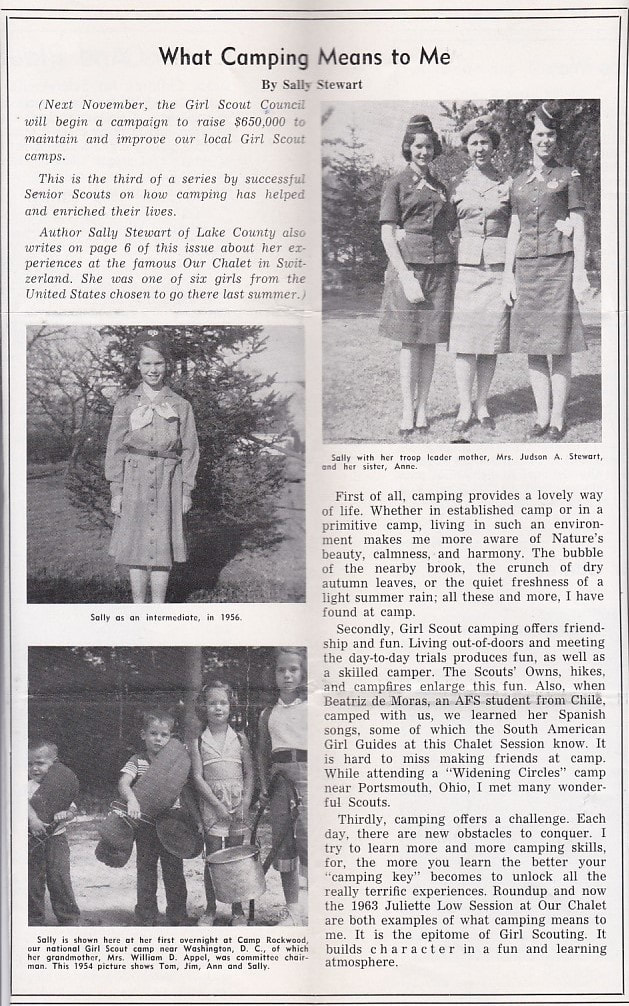 from The Millwheel Sept/Oct 1963
​The campaign Kick-off dinner was held at the Masonic Temple at 3651 Euclid Avenue on December 3, 1963. It was attended by about 350 members of the “Inner Leaders Division”. These were selected business leaders as well as any GS volunteers who responded to an open invitation in The Millwheel. 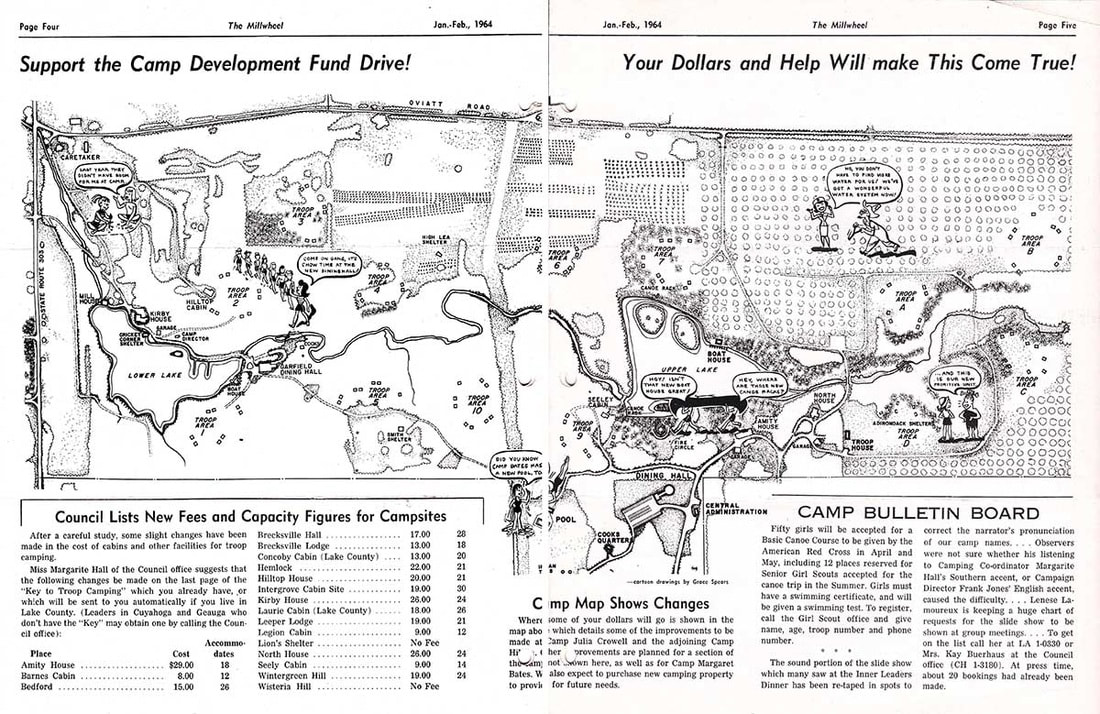 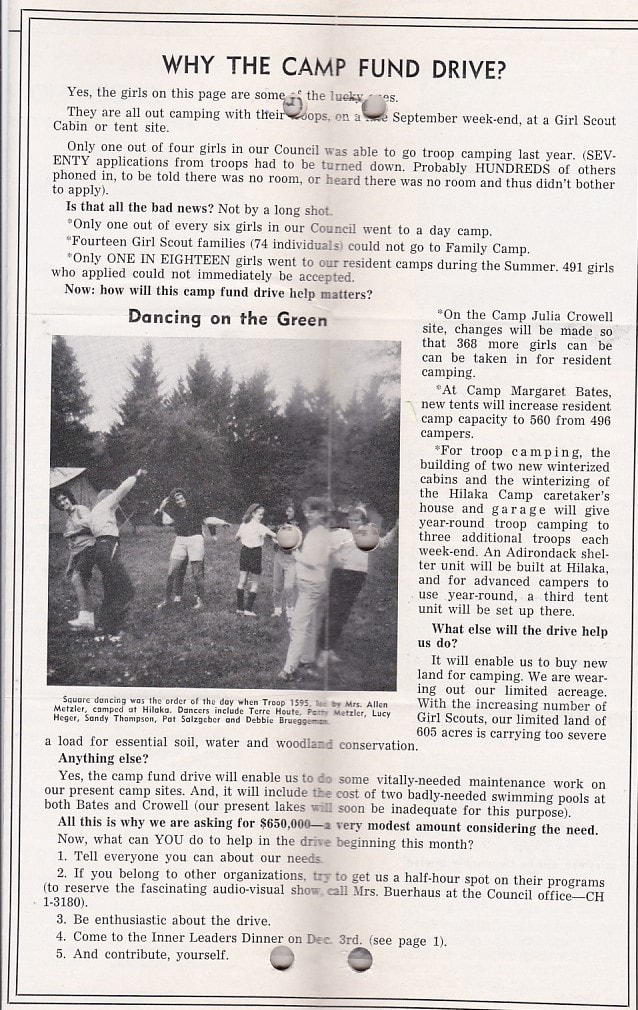 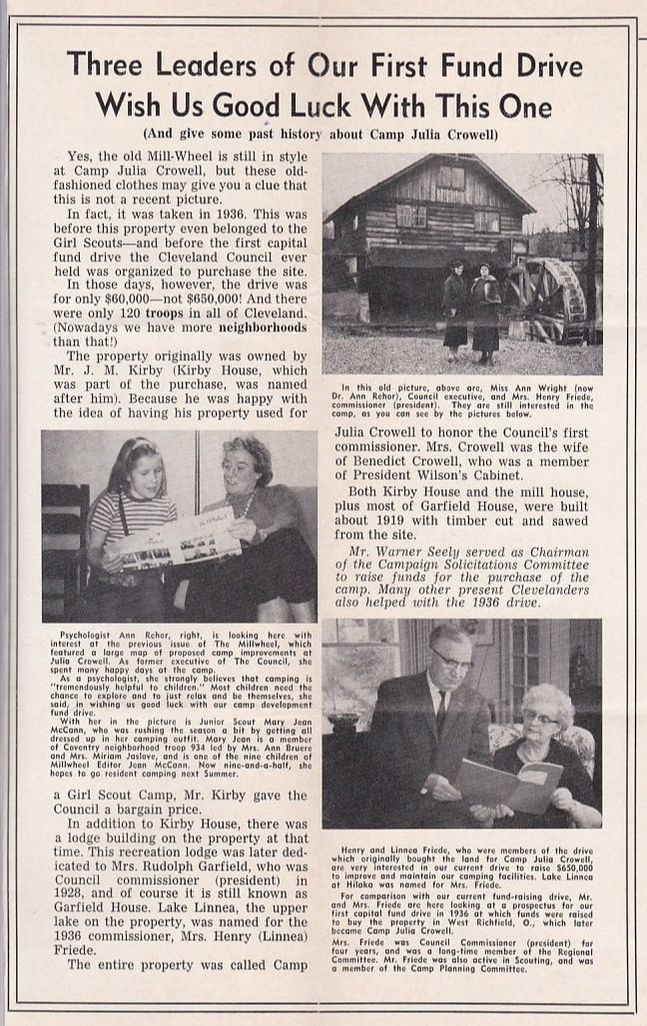 The Millwheel, March/April 1964
The campaign moved to scout families in March 1964. Volunteers and parents were urged to talk the campaign up to small businesses and the girls’ parents. "Tell your prospects that they are making an investment not only for your daughters, but for your daughter’s daughters” said Mr. Jones. “Back in 1937 someone else bought the camp which your daughters are now enjoying”.
​ 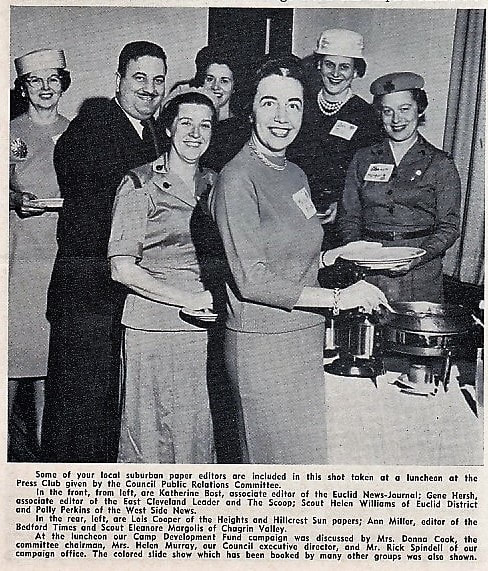 Journalists were invited to a press conference luncheon where they hear about the need for more and improved campsites. The Millwheel March/April 1964. 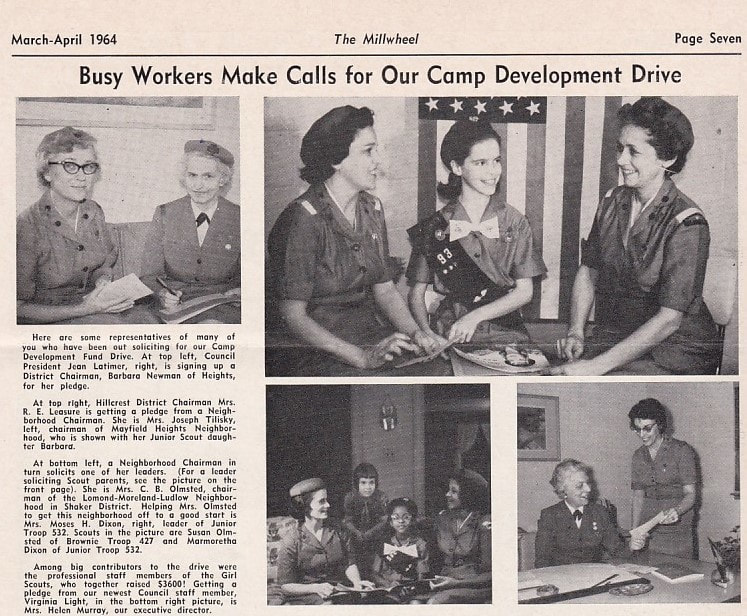 Two large gifts were announced at that time: $25,000 each from the Cleveland Foundation and the Beaumont Foundation.
Also: About 700 clubs and organizations were approached for donations by letter.

By April 1, 1964, $340,626 (a little over half of the goal) had been collected in 10,716 individual gifts. The official campaign office was closing although follow up phone calls would continue to be made.

The Millwheel Sept/Oct 1964 reported that $435,000 had come in. The council president, Mrs. Vernon Latimer, stressed that “some large contributors are waiting to contribute substantially, dependent on our making a larger percentage of our goal. She urges those who would like to add more to what they have already given to do so.” Pictured in this issue is General Motors manager Howard Holmes presenting LEGSC with a check for $15,000 (below) 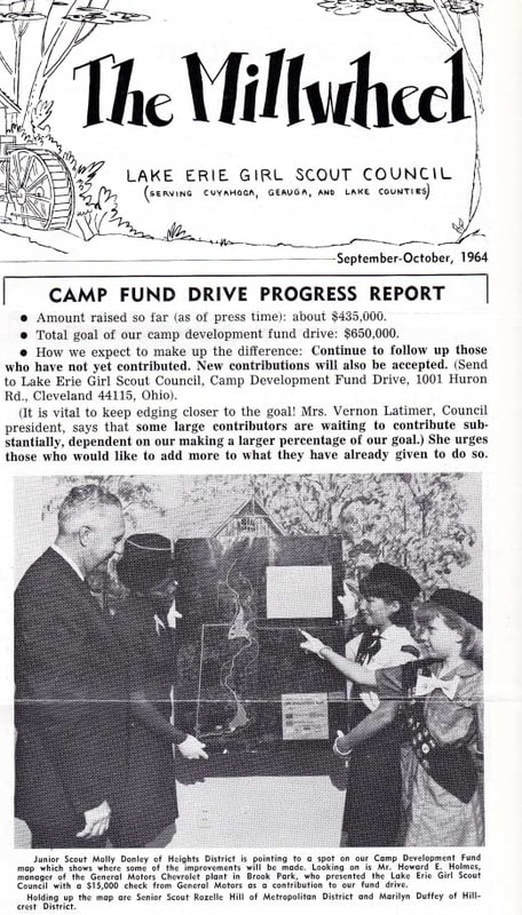 In 1964, Lake Erie Girl Scouts gets permission to build at the new campsite. Source: Myrtle Haslem's scrapbook, Richfield Historical Society
Nov/Dec 1964: reports Coach House upgraded to a troop site instead of being used as the camp manager's house. A new caretaker house and maintenance garage were constructed. The entrance on Broadview Road was formed and the long driveway cleared.

Of the different groups of targeted donors - the Scout Family and General Division was doing the best. 78% of goal at $153,771
In Jan/Feb 1965, The Millwheel reported $448,000 had been pledged. The Chagrin Valley District pledged the money for a new cabin which was then named after them. 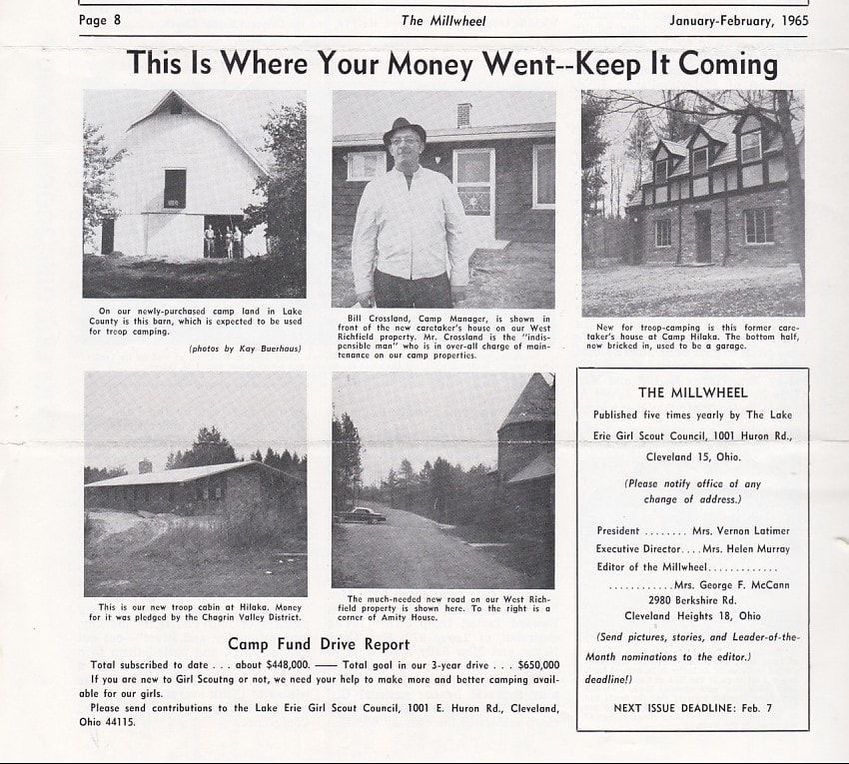 From The Millwheel March/April 1966:
A “less ambitious” swimming pool and dining hall for our West Richfield property has been decided upon by our board of directors because of failure to reach our goal in the Camp Development Fund Drive and because of the large number of unpaid pledges, Mrs. Alto Brown told those attending the annual meeting of the Lake Erie Girl Scout Council on February 7. “Even so”, she added, ”we are not able to definitely at this time able to say that we can go ahead with these revised plans. It is our hope that enough pledges and additional gifts will come in between now and June 1 so that we can begin both projects, together with the sanitation system , as soon as the resident camping season is over.” In the last year, she said, additional gifts have totaled $42,000, bringing to 492 the amount contributed toward the $650,000 goal.
​

Nov/Dec 1966:
“A new swimming pool and dining hall by next Summer! That’s the prospect now for our camp sites at West Richfield, thanks to funds received and being received from our Camp Development Fund Drive.

”The ground for the pool is now excavated, the pipes are laid, and the gunite shell is going in on property north of the gas cut at Camp Hilaka. Central Pools is building it, and promises full operation by next summer.

“Construction of the dining hall at Camp Hilaka, by the the Burns Construction Company, is now underway. It will serve campers in less advanced unit, and will be a commissary for the advanced units – paddlers, waterfront, pioneers, outposters, primitive, and CITs – who will still cook and eat out as usual.

“Now finished and working at Camps Julia Crowell and Hilaka is our new sanitation system, also thanks to the Camp Development Fund Drive monies. Our new treatment plant is behind a fence enclosure near the parking lot at Camp Julia Crowell.”

Click here to see the program from the dedication ceremony. 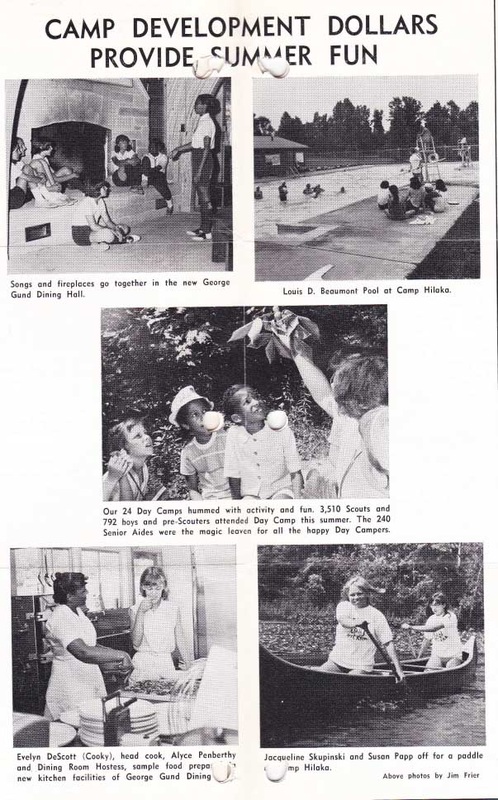 From the 1967 Sept/Oct issue of The Millwheel