Crowell Hilaka
Garfield Hall
This the famous dance hall that Jim Kirby built on springs. It is not like an inflatable bouncy house at a carnival. It doesn’t even feel unusual when you first enter. There is only the slightest “give” when walking across the center of the floor. But an entire party in unison dance step will feel the floor rocking along with them. It was built in 1923. Legend says Kirby built it for his daughter’s 16th birthday. According to Kirby's great niece Gale Betterly, Uncle Jim had obtained heavy-duty streetcar springs from Cleveland. He enjoyed dancing, and "probably built it just to see if it could be done." This may be the case since his none of his daughters or nieces were close to age 16 when the hall was built. But any of them may have held a celebration there later when the time came. 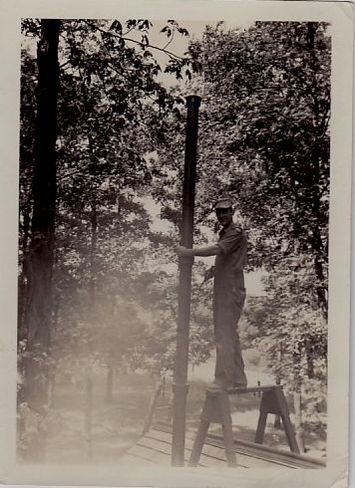 handwritten caption on back of photo: "Vernon Scobie working on stack at Kirby's dance hall" . Courtesy of Richfield Historical Society 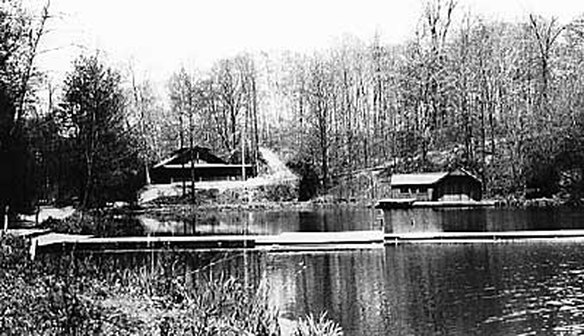 Garfield Hall in the distance on left

The first major event hosted there was the Vacuette Company’s third annual picnic, held soon after construction was complete. A procession of cars and buses brought everyone from the company’s Cleveland headquarters for a day at the Kirby farm. From the souvenir brochure: “On high ground at the head of the lake was built a spacious bungalow, put up especially for the convention, with its deep open fireplace, and polished hardwood floor, where dancing was so easy, to the excellent music of one of Cleveland’s best dance orchestras. Adjacent to the bungalow, the big top tent was set and there at one o’clock, luncheon was served hot from the outdoor stoves in charge of an excellent caterer from Cleveland…….So full of interesting events was this first day of the Convention, spent at Kirby’s that to outline even briefly the most interesting features would be to devote too much space in this already over-sized edition of the Broadcaster…”

The Alpha Motion Picture Company of Cleveland was on hand to capture the festivities on film. The film was developed and processed overnight, and the resulting movie shown at the formal company dinner at the Cleveland Yacht Club the next evening. While YouTube videos are commonplace today, in 1923 on overnight film was unheard of. A technological marvel.

In 1926, the annual Bigelow family reunion was held at the lodge. Jim’s mother, Sylvia Bigelow, served as hostess. “There were seventy present. After dinner pictures were taken, woods and lake explored. We were called together for the usual business meeting with the usual results. Music furnished by Etta, Bernice, and Nellie. Expenses: Ice cream $9.00, paper plates 0.9, napkins 0.25, coffee 1.25, sugar 0.23, help $3.00” 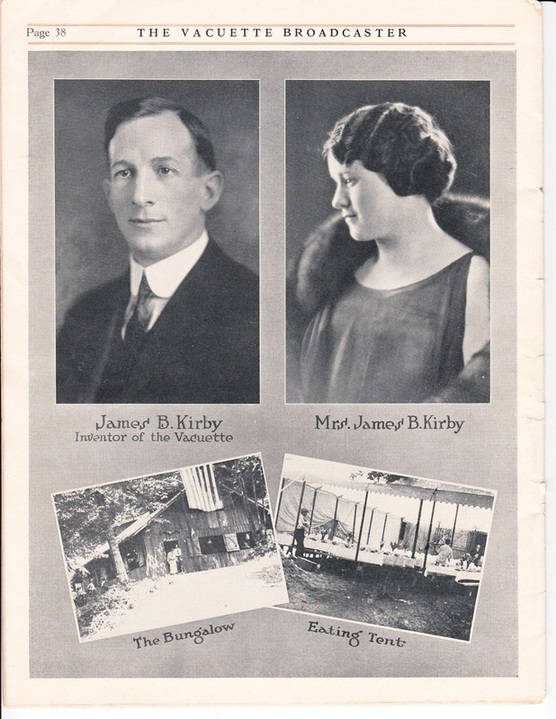 Souvenir program from the third annual Vacuette convention – held at the Kirby farm.
The couple pictured at the door of The Bungalow (lower left) are probably Mrs. & Mr. Kirby.
IN 1940, when Kirby wrote a letter to the Cleveland Council which included the history and construction details of his former estate, he simply called it “the cabin” and “the lodge”. He noted that it cost $4,900 to build and that the siding was mostly chestnut. He did not mention the bouncy floor at all. 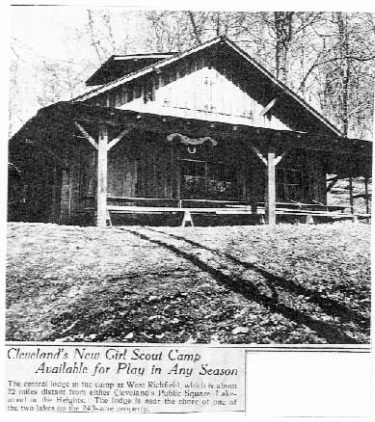 From 1937 until Gund Hall was built thirty years later, Garfield Hall was the dining hall for resident camp. The bell outside called campers in to supper. The Girl Scouts added the screened porch and the back storage portion. 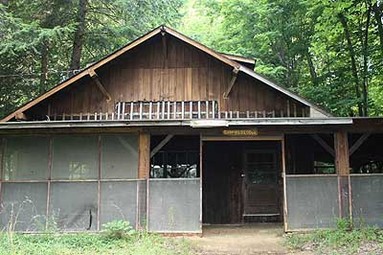 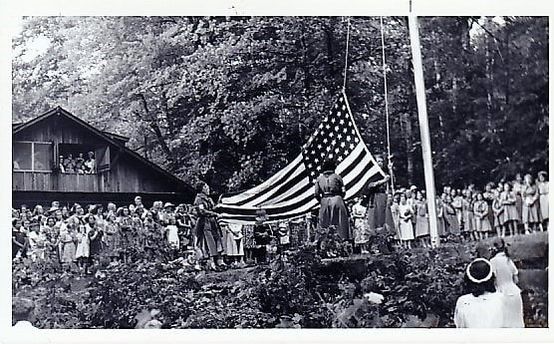 Garfield Hall is seen in the background during the camp dedication ceremony in 1937. Spectators watched from a loft which was later removed. 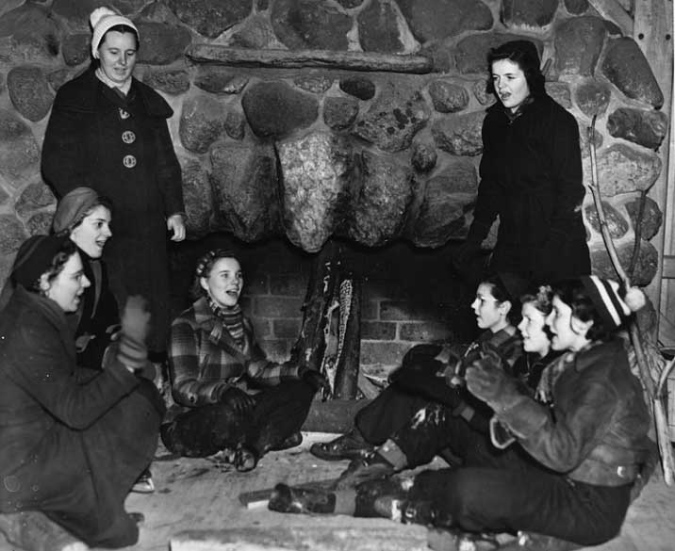 Singing in front of the fireplace in Garfield Hall, 1937. Source: Cleveland Press Archives 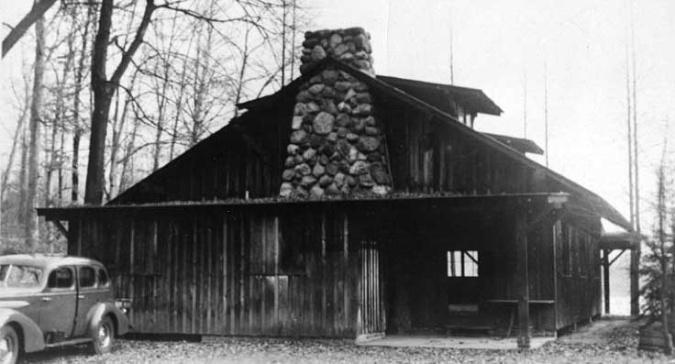 Back of Garfield Hall, 1937, prior to addition of kitchen and storage area. Source: Cleveland Press Archives 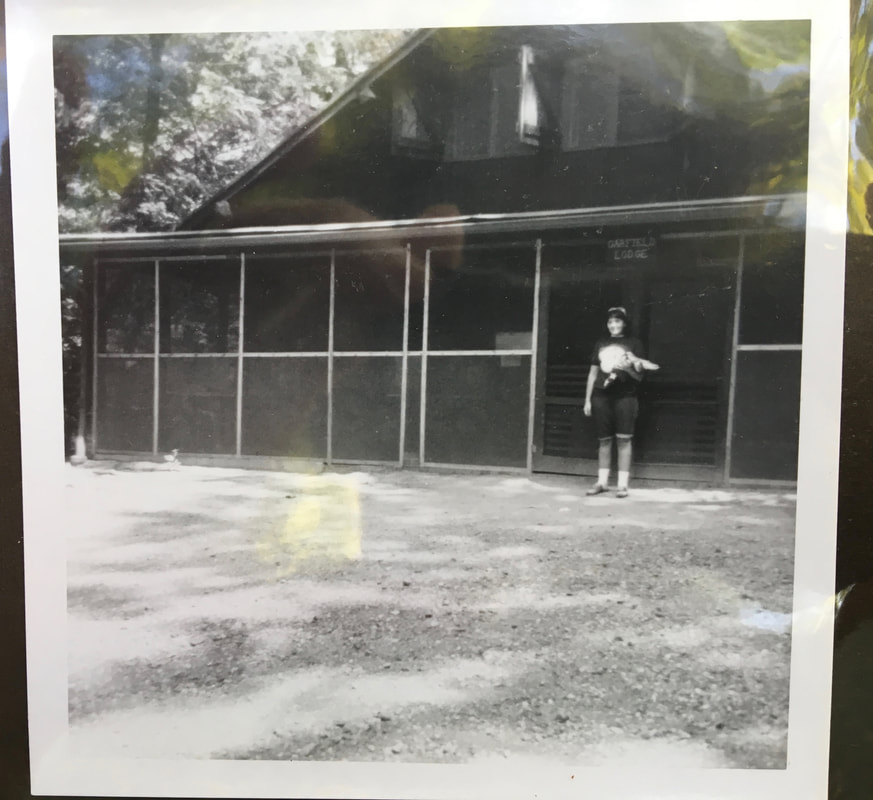 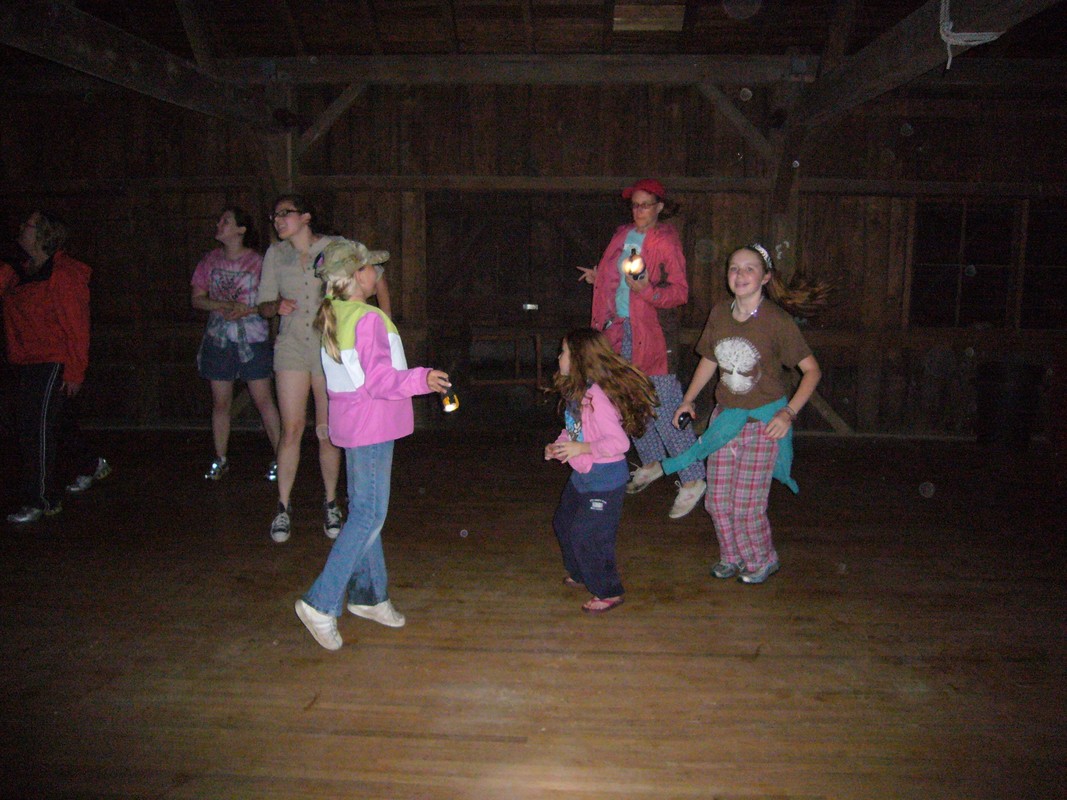 The bouncing floor
In the 2010 survey of camp properties sponsored by Girl Scouts of North East Ohio,  the "house with the bouncy floor"  was mentioned more than any other feature of any of the seven camps.  When they closed Crowell Hilaka, the council considered disassembling Garfield Hall and re-assembling it at Ledgewood, one of the surviving camps.  ( see Phase 1, step "B" on the chart below "relocated Hialaca (sic) dance barn" ) 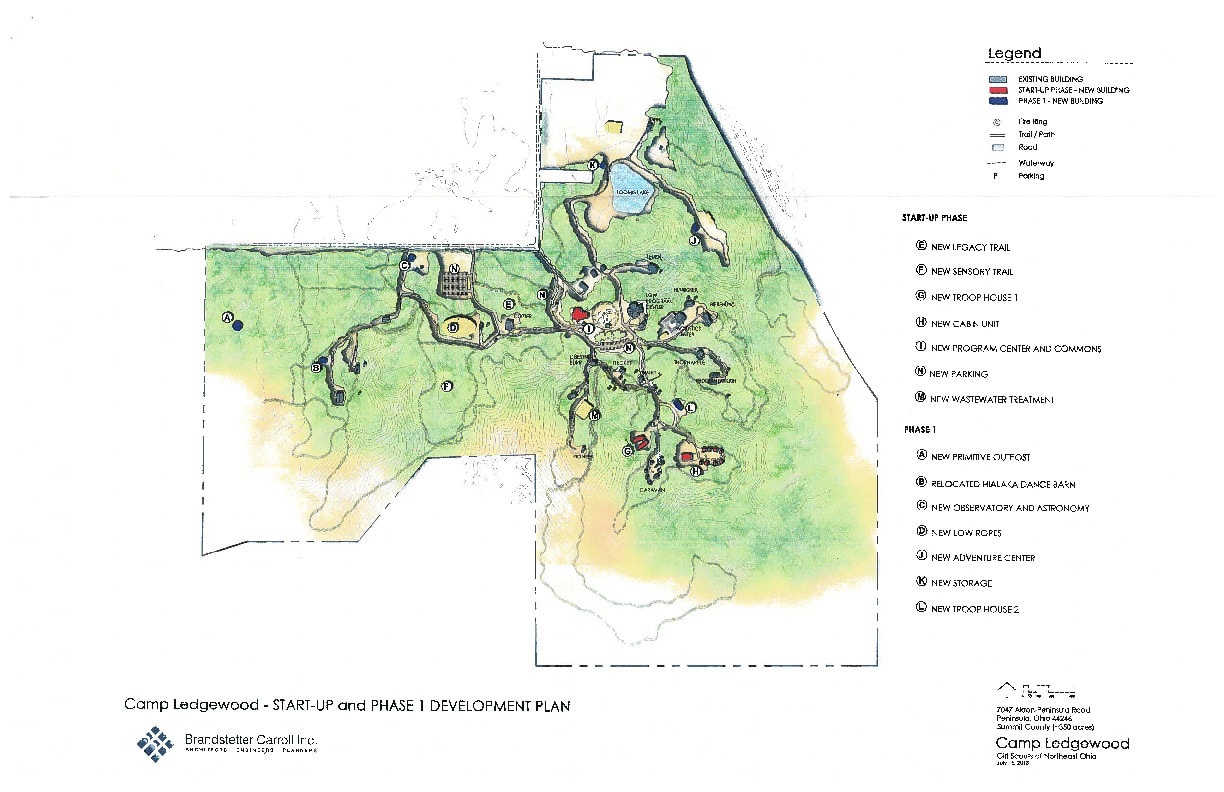 A drawing of Camp Ledgewood improvements in 2012 featuring "Re-located Hilaka Dance Barn"; Letter B in "Phase 1". 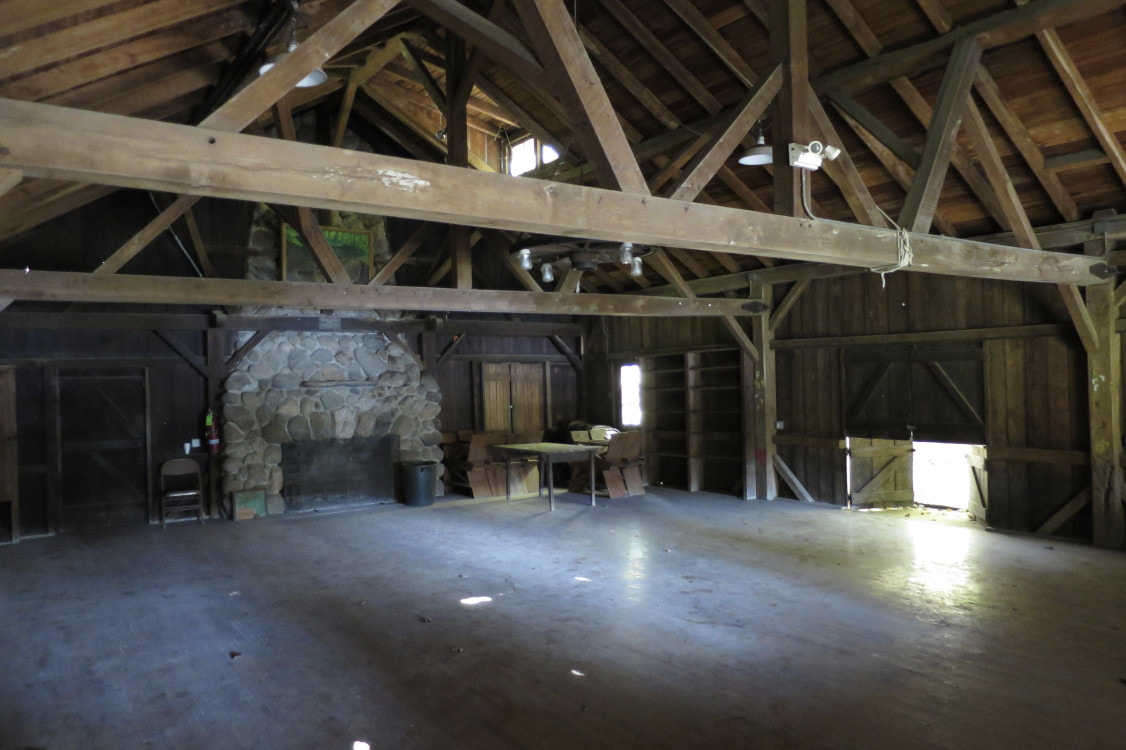 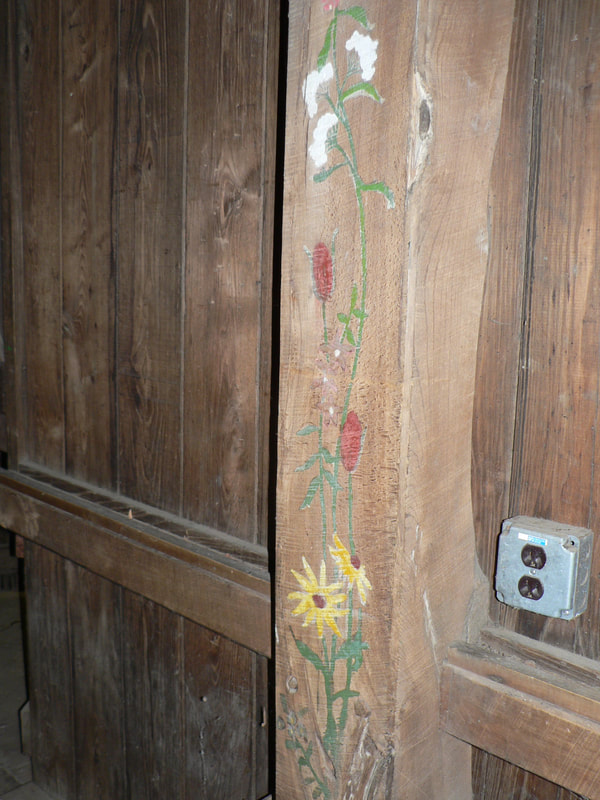 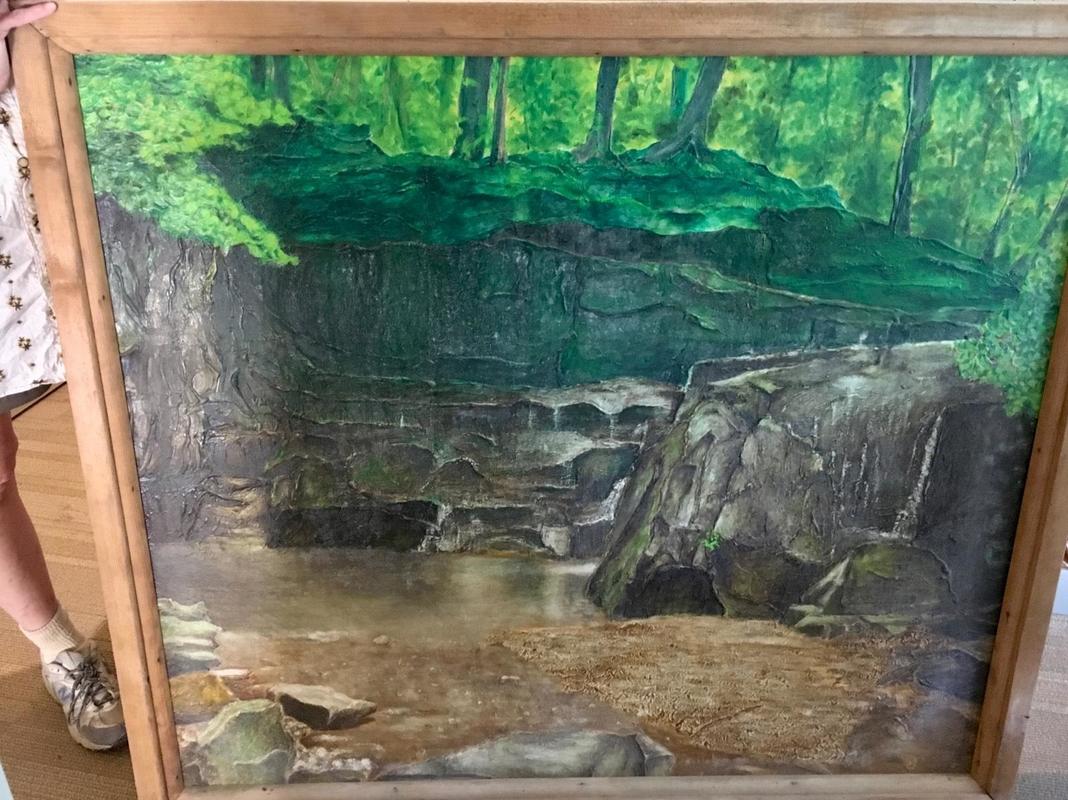 This painting of the secret waterfall hung above the mantel of Garfield Hall for many years. Artist: David Thomas, camp assistant.