Purchase of the Neal Property

The origin of Hilaka: Choices, Chance, Mystery, and Dreams

By 1951, summer resident camp at Julia Crowell was so popular that it filled to capacity – and then some. Council could have raised prices, but they were determined to make camp affordable to everyone.  They even provided financial aid for low-income girls to go to camp.

But when the Council had to start turning girls away for lack of space, they realized they would need to build more campsites. Even that would not be enough. They would soon need an additional camp. As a "Red Feather" agency, receiving support from Cleveland's  Community Fund, they were required to ask permission from the fund in order to launch a capital campaign. The Council demonstrated sufficient need and was given the go-ahead.

The campaign brought in enough funds to buy land for the new camp in Macedonia – later named Camp Margaret Bates – in 1953.  But not enough to build new facilities at Crowell.

Four years later, the Neal land next to Camp Julia Crowell went up for sale. The land included one third of Crowell’s upper lake.  Controversy broke out at Council.  Some argued that there was simply no money to buy more land and that they had just tapped out all potential donors to buy Bates. Others said that the upper lake absolutely had to be protected no matter what.  Any pollution would wash down to the lower lake and curtail any boating and swimming.  And that would destroy camp.

In the end, the Cleveland Council bought the Neal’s land.  But there is no record of how they pulled it off.

Having bought the land to save the lake, the Council found themselves the owners of two very beautiful gracious homes on the lake shore. This suggested to some that the new grounds could become something more than an average camp: maybe a regional destination or even an international center.   Six years later,  a new capital campaign was launched to bring the new property to its full potential. 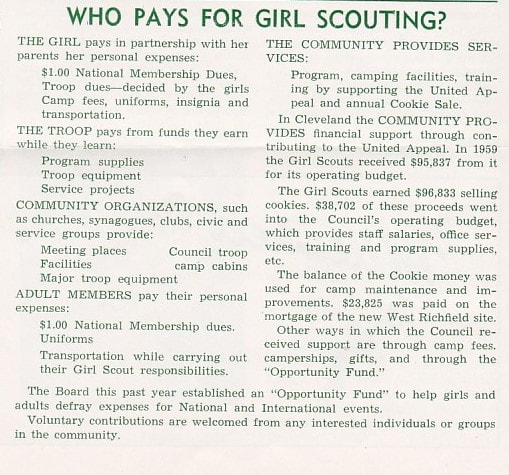 from The Millwheel April/ May 1960

from The Millwheel March/ April 1963