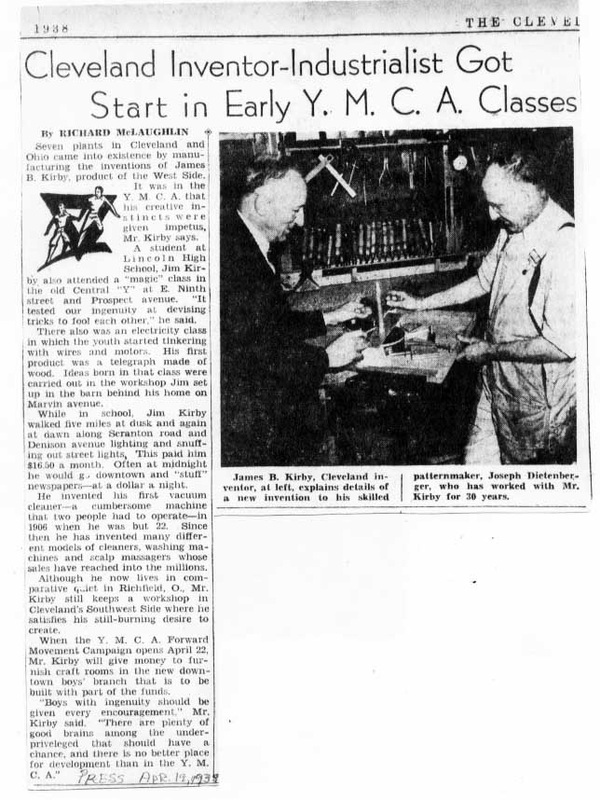 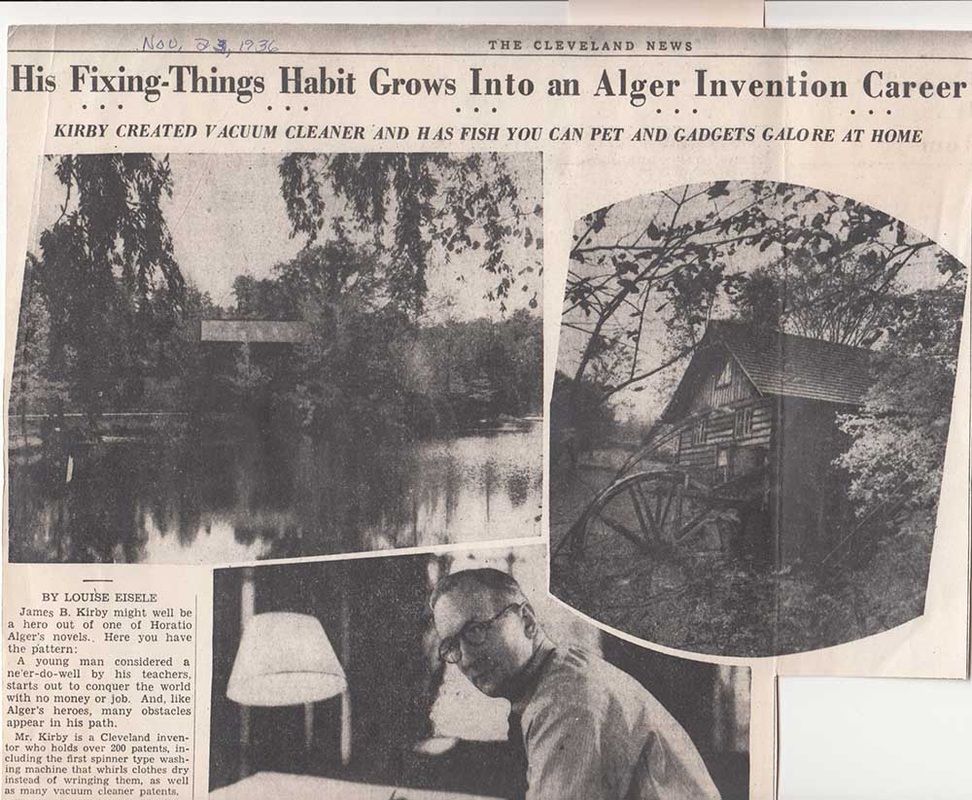 Full text of the above article:

"His Fixing Things Habit Grows into an Alger Invention Career


James B. KIrby might well be a hero out of one of Horatio Alger's novels. Here you have the pattern:   a young man considered a ne'er-do-well by his teachers, starts out to conquer the word with no money or job.  And, like Alger's heros, many obstacles appear in his path.

Mr. Kirby is a Cleveland inventor who holds over 200 patent, including the first spinner-type washing machine that whirls clothes dry instead of of wringing them, as well as many vacuum cleaner patents.   There is nothing unusual about a little boy who likes to take machinery apart.  Most of them do that.  But young Jim KIrby could put it back together again. He had a knack for fixing theings.   Before long, whenever anything was broken, the neighbors would say, " Let Jim tinker with it."

When the young inventor entered Lincoln High School, he wanted to work in the chemistry laboratory and hear the names of Marconi, Faraday, and Pasteur. Instead, he found himself enrolled in a Latin class. He cared nothing about the ablative case and the pluperfect tense and he told them so.  "Young man, do you presume to know better than your teachers what is good for you?" thundered the scholarly principal.  "Well, you'll not get far in this school."   And young Kirby walked out and hound himself a job. He chuckled as he told this story, and then added, "Now I make more money than any of them."

HIs first assignment was to make an automatic secretary. And he did.  When the phone rang, a phonograph record started to recite, " This is a phonograph in Dr. Doe's office, Please give me your message."  Then an automatic switch would set the machine to record the caller's voice. When the reciever was hung up, the machine was set to answer the next call.  This principle is is not used in automatic dictating machines, but Kirby recieved nothing more than his weekly salary of $10.50 for his idea.  That made him decide to save for a shop of his own.

So he took on three more jobs. He was a printer's devil and hustled newspapers for the old Cleveland Leader.   He lit lamps and turned them out in the morning along a five mile route for $16 a month.  Soon a little surplus piled up.

HIs first invention in his own business was the vibrator which is still in use in thousands of barber shops. But he wanted something more practical - something that every housewife would want. He was impressed by the crude methods of cleaning carpets. A broom only scattered the dust.  Carpet beating was drudgery.  The people next door had a horse and wagon and a gasoline engine come and pump out the dirt through a small hose.  So he tackled the problem, and made a mechanical sweeper.  "It was a cumbersome thing." he said,  "There was a large tank and it was operated through a hand pump. But I knew the idea was sound and I have been improving it ever since." He refused to sell his patent outright, and decided to accept royalties, and says he has never regretted it.

Kirby is a tall, slender man with brown eyes and white hair.   He doesn't smoke, plays a little golf, and likes to spend a month or two in Arizona every year.  His greatest enthusiasm is his work.  "Even when I am playing bridge, my mind sometimes gets started on a new invention. There are inventions just crying to be made.  A young man today has a good chance of making a fortune through his inventions."

"The first thing to do is to make sure the idea you are working on hasn't already been patented. Then choose something practical. An electric page turner might be interesting, but it is quite possible to live without one," he continued.  Mr Kirby believes there is more money in royalties or in forming new companies than in selling a patent outright.  He also advises young men to stop trying to improve radios and locomotives.  "There are too many experts in those fields to have a chance of discovering something really revolutionary.  I always run in the opposite direction from the crowd," he said.  An idea has to work perfectly in Kirby's mind before he builds a model. " That is how many inventors waste their money,." he said.

The Kirby home is now located on the land he loved as a boy - West Richfield, about 20 miles south of Cleveland. There are all sorts of gadgets on his estate. His Swiss-chalet-type house, built on the side of a hil, is air conditioned by a pipe that sprays the roof in summer and keeps it as cool as a basement. He built a ball-bearing water wheel that operates with just a trickle of water to furnish electric power for the estate.  There is a seven acre lake with a patent clarifying system in it.  A pipe runs under the lake to catch all the water draining from nearby pastures, leaving it as clear as a spring.  It is stocked with bluegills, bass, and catfish. It is not a fisherman's paradise, for the fish are tame. Inventor Kirby bent down to throw bread to the bluegills as they swarmed around. He stroked the backs of the catfish.  I'd just a soon eat a pet rabbit as to eat one of these fish," he said.  Even on his fox hunts the beagles never kill the fox.

His drafting board was filled with blueprints of vacuum sweepers.  "Our machine age is just beginning," he says. "In five years most of our appliances will be out of date. Ideas just keep streaming through my brain and I just itch to get at them."  And like a good Alger hero, success has not turned his head.
An article from the Cleveland News in 1939: 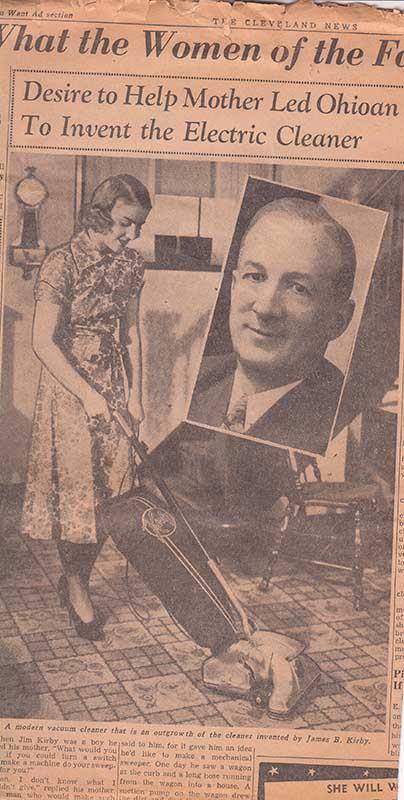 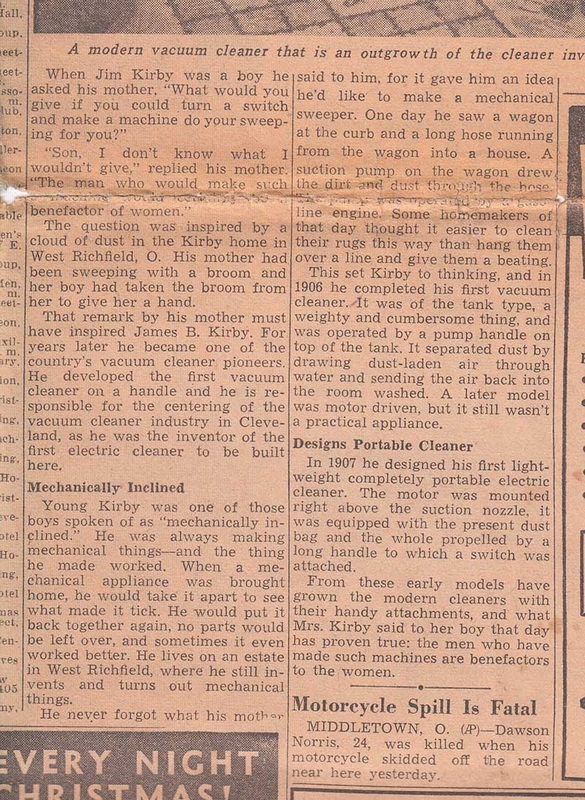 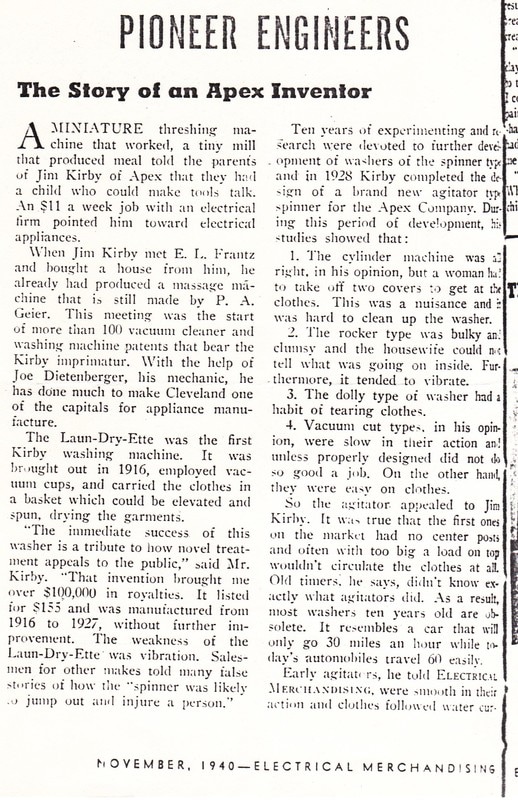 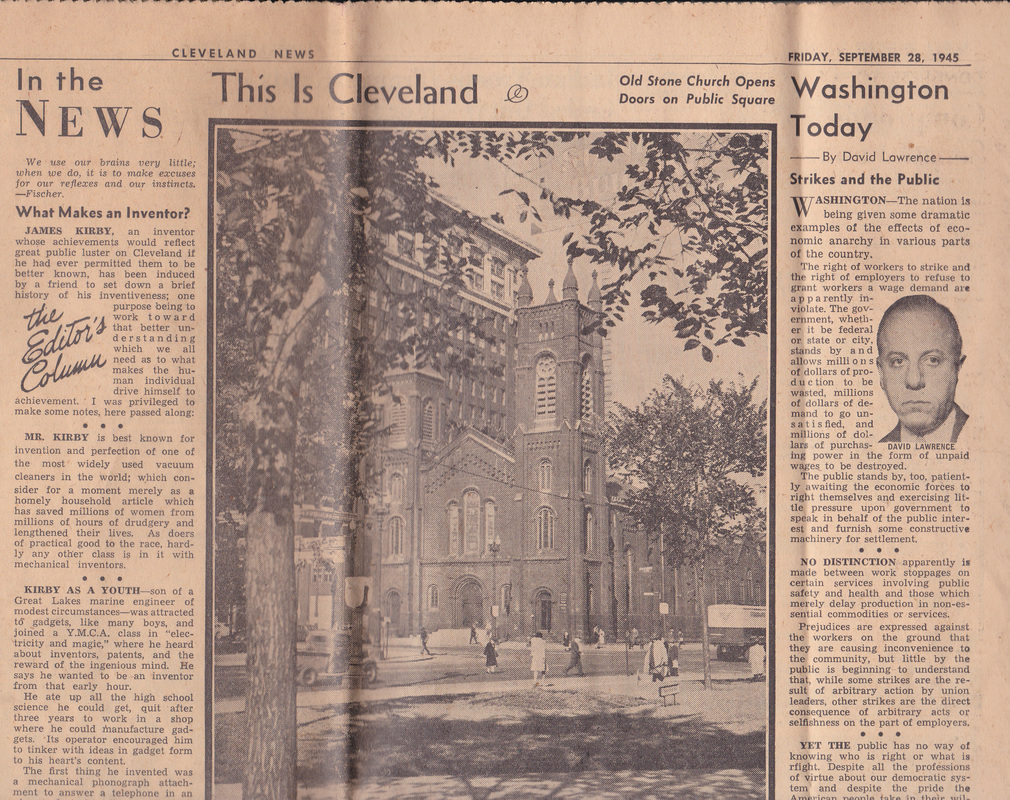 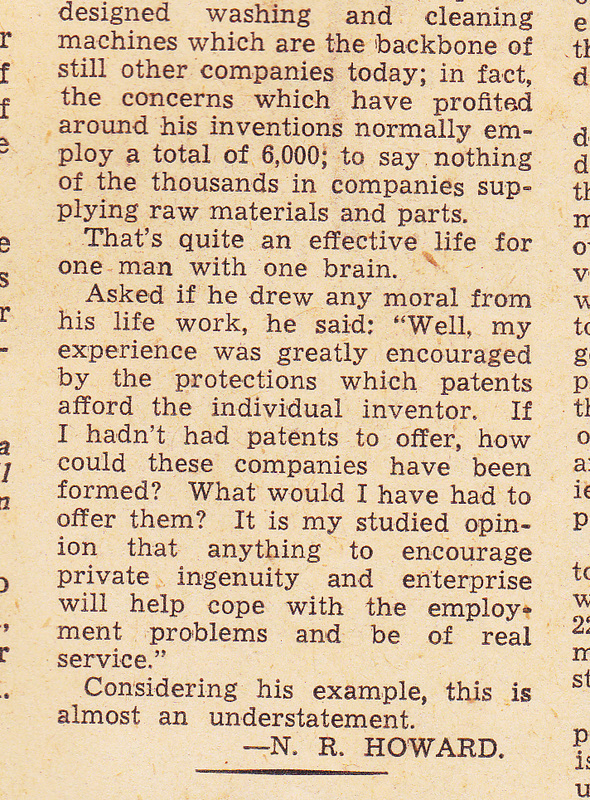 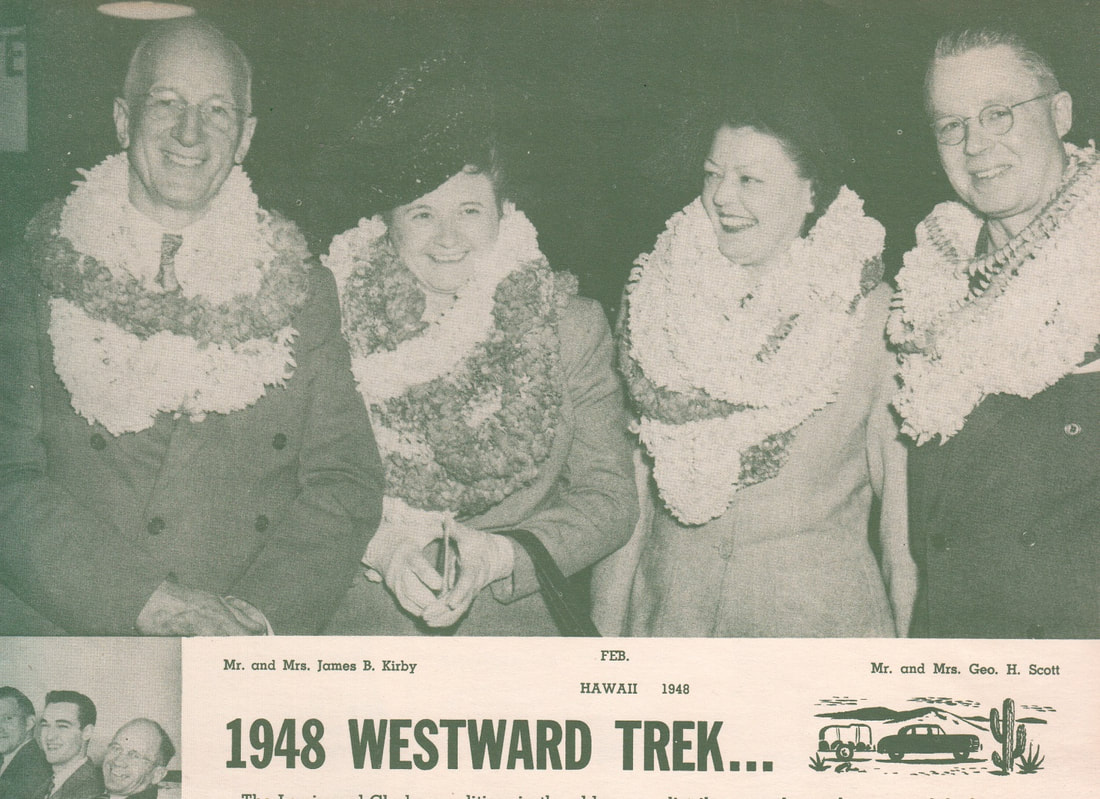 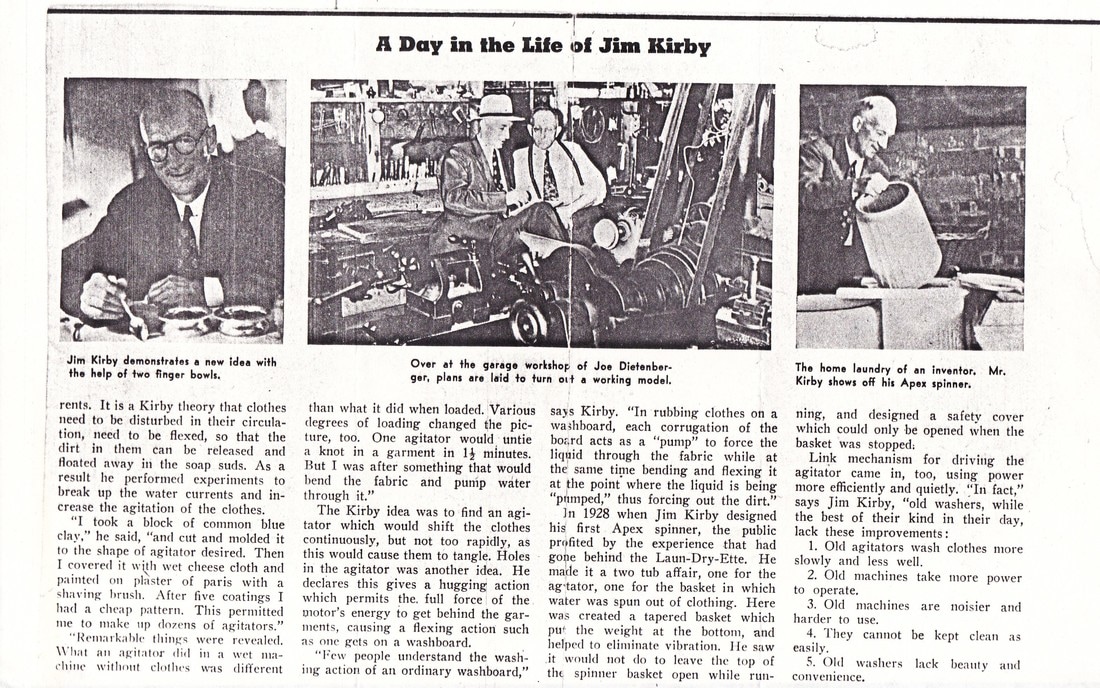 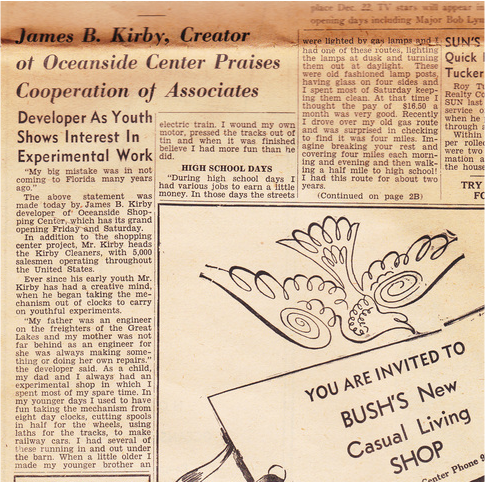 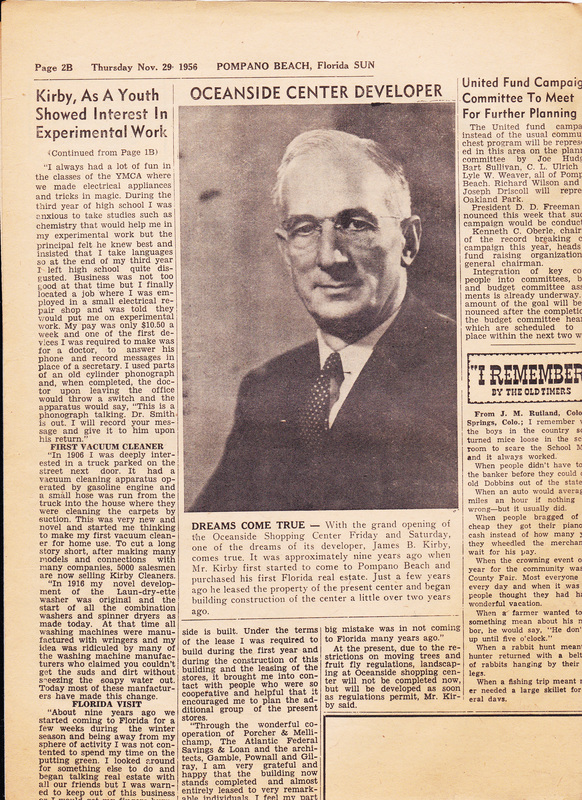 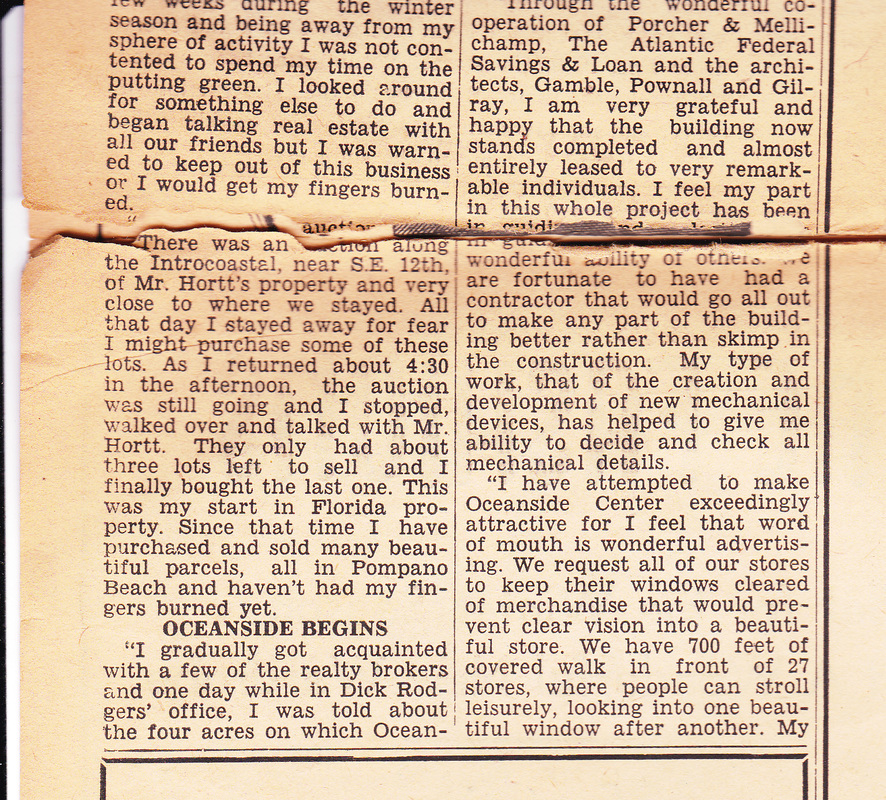 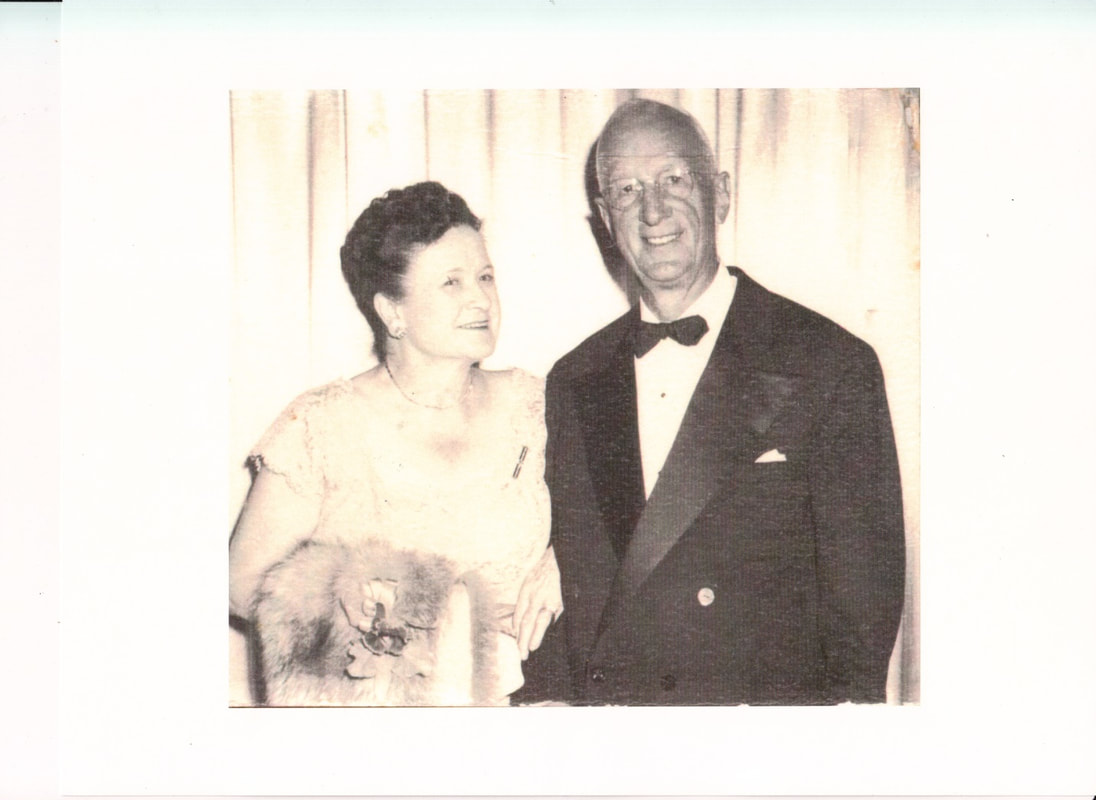 1994 inducted into the Vauum & sewing Hall of Fame o

https://www.vdta.com/HOF/Kirby.html
Jim Kirby
Inventor, Domestic Vacuum,
Premier Vacuum, Kirby Vacuum
September 28, 1884 - June 9, 1971
Jim Kirby, in 1900 owned a motor repair shop in Cleveland, Ohio, and was a fledgling inventor. A man named Knocks asked Jim to build a massage machine. Jim did, Knocks used it as a premium item, and eventually, 1903 - 1904, it was sold to P. A. Geier, who manufactured it under the name “Royal.” A Cleveland doctor wanted a device that would answer a telephone. Jim went to work, and shortly had such a “gadget” operating. It used an Edison cylinder phonograph, was operated by automatic electrical controls, and when completed would say, “The doctor is out. This is a phonograph talking. Please speak your message and it will be repeated to the doctor when he returns.” It operated so well the doctor had it patented. One day, seeing a huge wagon-mounted vacuum cleaner, Jim concluded he could make a portable unit. His first cleaner, marketed by Domestic Vacuum Cleaner Company, sold for $25.00 as a hand pump model or $85.00 with an electric motor. The machine utilized two buckets of water as filters, which had to be c
arried around and emptied frequently. By 1910, he was working on a “broom stick” carpet cleaning model that had a cut-off mechanism that allowed attachments to be used with the machine.
Kirby was the pioneer in developing the concept of a very lightweight, nozzle type vacuum, radically different from the cumbersome box-type vacuums of the era. Kirby met 3 brothers, Edward and Clarence, who were in the building materials business, and Walter Frantz, who was a mechanic. The Frantz brothers obtained the rights to manufacture and sell Kirby’s newest vacuum, and the Premier Vacuum Cleaner Company was formed. Model B was sold with a narrow suction only nozzle. Model C introduced a wide nozzle and a brush. Model D had an air-driven brush. During World War I, Kirby came in contact with George Scott and Carl Fetzer, owners of the Scott & Fetzer Company. Scott & Fetzer owned a blacksmith company in Cleveland, and were currently manufacturing military armaments for the war effort. When the war ended, they began manufacturing a new, improved model of Kirby’s cleaner. The machine has been sold ever since by Scott & Fetzer under the Kirby label on a door to door basis. Kirby spent his final inventive year
s dividing his time equally between Scott & Fetzer and the Frantz Brothers, whose corporate identity would later become Frantz Industries.
1994 Vacuum & Sewing Hall of Fame Inductee