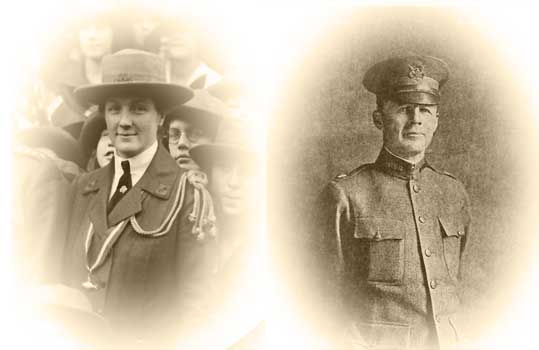 Julia Cobb Crowell and Benedict Crowell
Julia Root Cobb grew up as a daughter of Cleveland’s “Millionaire’s Row”.  She played tennis, organized bicycling parties, went to finishing school in in Boston, and was properly debuted. In 1904 she married Benedict Crowell.

Benedict Crowell was a chemical engineer. Like his wife, he came from a wealthy and influential Cleveland family.

When America entered the First World War, former Cleveland mayor Newton Baker was appointed Secretary of War.  Baker, in turn, appointed Benedict Crowell as his Assistant Secretary.  Neither was a military man.  Baker was known for his administrative abilities; Crowell for his versatility and connections.   When they moved to Washington along with their families, Julia Crowell and Elizabeth Baker looked for ways to support their husbands and the war effort.  The ladies  got involved with the newly formed Girl Scouts who were also looking for ways to help. They organized lunch carts to provide food for the thousands of clerical personnel who were pouring into the city. By 1920, Julia Crowell was the Commissioner of the D.C. Girl Scouts.  Elizabeth Baker was Deputy Commissioner. When they came back home to Cleveland in 1921, they brought the official Girl Scout organization with them.

Julia Crowell served as Commissioner of the new Cleveland Girl Scout Council from 1922 to 1928. 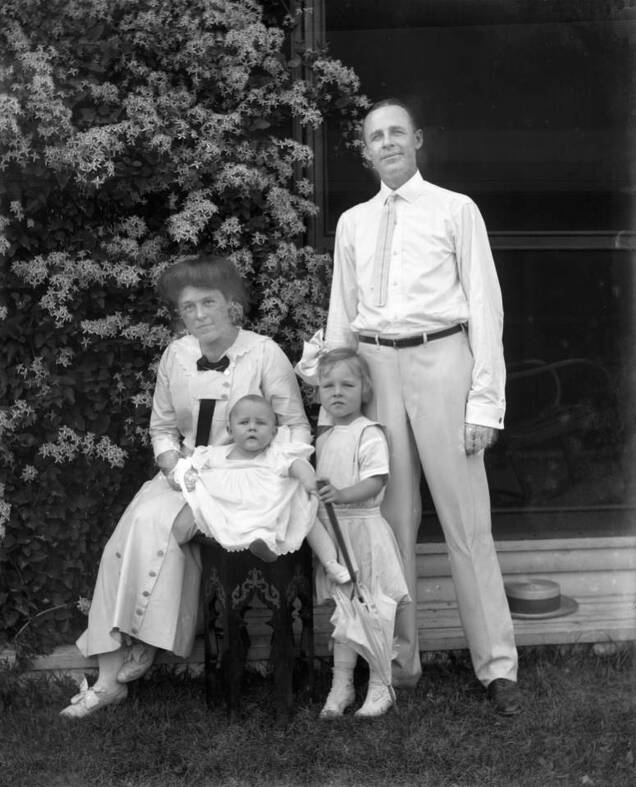 The Crowells. Julia, Ben Jr, Florence, Benedict.
more about the naming of the camp

I went looking through the archives of the Plain Dealer for Julia Crowell. The person, not the camp.

I was coming up with nothing- which was not just frustrating.....it was wrong.  Not only was she the first commissioner of the Cleveland Girls Scout,  she was so beloved that they named a fantastic place after her.  Besides that, she was a wealthy Society woman. Her husband was an inventor, a dashing war hero, and the contractor for the Cleveland Museum of Art (the 1916 part).  How could she have disappeared without a trace????

Turns out I was looking in the wrong place.  Women back then went by their husband’s names.  We are so used to thinking of Juliet Low using her own first name in 1912 – we forget she was that that was permitted because she was a widow.  When I tried searching “Mrs. Benedict Crowell”, there were so many articles, I haven’t even scratched the surface yet.   Then I tried under her maiden name

The late 19th century took “Society” very seriously. The wealthy, elite families were listed in an annual yearbook called “The Social Register ”. Those in the book were “Society” – a sort of American aristocracy who went to each other’s parties and worked on each other’s charitable causes. It was a world with little business or industrial regulation, and NO income tax.  It seems like anything anyone in the register did was considered newsworthy

In 1895 the paper reported every time one of the young Society ladies went to and from boarding school.  Miss Julia Cobb and her friend Grace attended Miss Hershey’s school in Boston.

In September 1896, “ Miss Julia Cobb gave a bicycle ride and dinner at the country club for 16 of her young friends”.  Assorted parties, weddings, frolics were all duly noted along with their guest lists.

January, 1898
“One of the largest and most beautiful dancing parties of the season was given at the Colonial Club on Tuesday evening by Miss Grace McBride and Miss Julia Cobb, “buds” of the winter. Mrs. J.H. McBride and Mrs. Lester A. Cobb and their daughters received guests in the red parlor. There was a brilliant assemblage of society’s elect, over 400 being present, and the number of handsome toilets was notable. Miss McBride wore white crepe du chine and carried La France roses. Miss Cobb was also in white, her gown of point d’esprit over satin insertion bands.  She carried Lillies of the Valley.  Pink was the color scheme in the banquet room and the decorations in the other apartments were very effective.

I skipped up to 1904 to find her wedding to Mr. Crowell. Like many weddings of the time, it took place in her parents’ home.  I will spare you the description which sounds like a crawl through a florist's warehouse.

During WWI, the Crowells  moved back and forth between Cleveland and Washington, DC.  During that time,Julia becomes the commissioner of the D.C. Girl Scouts.  Washington is crowded with extra personnel needed for the war effort.   But there is nowhere for all the extra people to get food. Girl Scouts to the rescue! They set up lunch wagons everywhere in the city, and the nation is grateful.
[You can see a picture of Julia Crowell from around this time by Googling  “Mrs. Benedict Crowell”. There are a couple pictures which show her with standing next to General Pershing and Mrs. Warren G. Harding.  There is a fourth- unidentified- adult in the pictures.   But if you’ve ever watched “the Golden Eaglet”, you will recognize Juliette Low.]

February, 1922 Much space is devoted to the newly re-organized Cleveland Girl Scouts. The intrepid “Black Duck “ troop goes out hiking, gets caught in a rainstorm, the water freezes on their clothes, and they arrive at the commissioners house wearing ”ice jackets”.  They dry off and spend the evening in happy signaling practice.