Crowell Hilaka
Kirby's Mill
Jim Kirby constructed his mill in 1922 to produce hydroelectric power for his home and workshop.  He constructed a working model of a grist mill when he was still in school, indicating an early interest in water powered machinery. His millwheel was the first of its kind, designed so that its weight rested on ball bearings. It could turn with just a trickle of water. Construction cost was $2,300.


According to a letter Kirby wrote in 1940 to the Cleveland Girl Scout Council, “ the water wheel was built by Mr. Pardee, a millwright, who had built many wheels during his life. It is made of Cypress spokes and rims, and the buckets [ aka blades ] are made of Oak. The lumber and millwork in this wheel cost $442.00.“

The wheel ran only during warm weather. Every fall the ball bearings were lubricated and packed to prevent moisture from entering the ball races.

The power generation equipment was on the first floor . An interior set of simple wooden steps led through a trap door to the second floor- Kirby’s workshop. The “third floor” was a loft with French doors that lead out to the balcony. 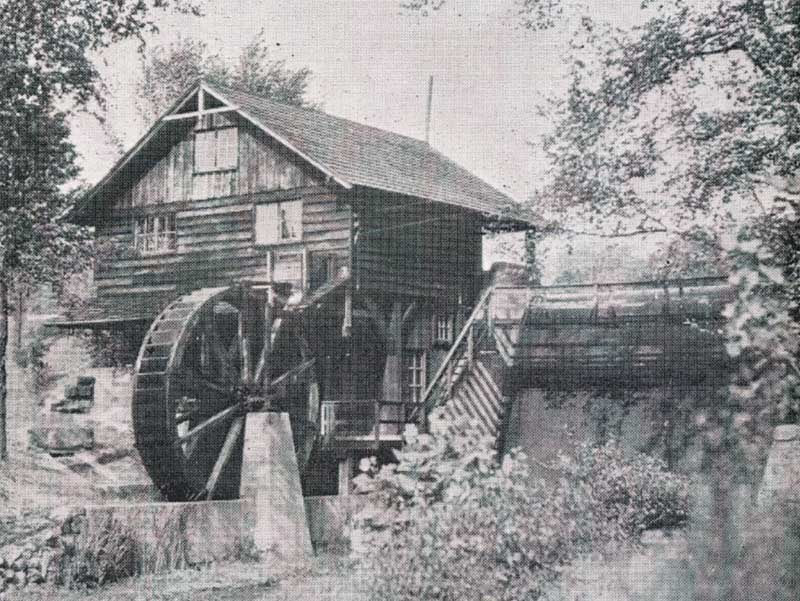 A 1923 souvenir booklet from the Scott Fetzer company picnic on the Kirby grounds. The photo on the upper right shows a diver poised by the Millhouse, about to take a plunge into the lake as spectators line the wall of the dam. Source: Richfield Historical Society 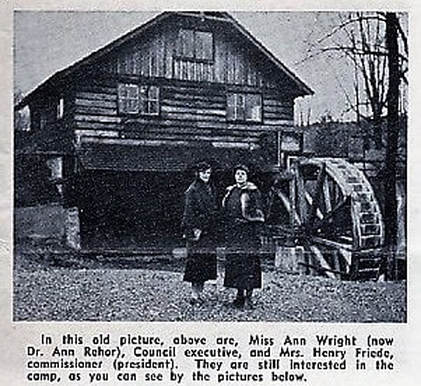 clipping from The Millwheel, 1964
​After the Girl Scouts bought the Kirby estate, they used the mill house as an area for teaching crafts to campers. Not only did it serve as a studio, the mill and its surroundings were a source of inspiration. ​ 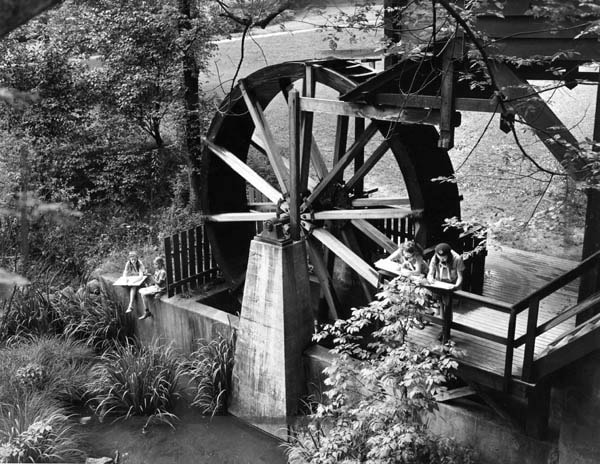 above: mill images drawn by girls for the summer camp newspapers 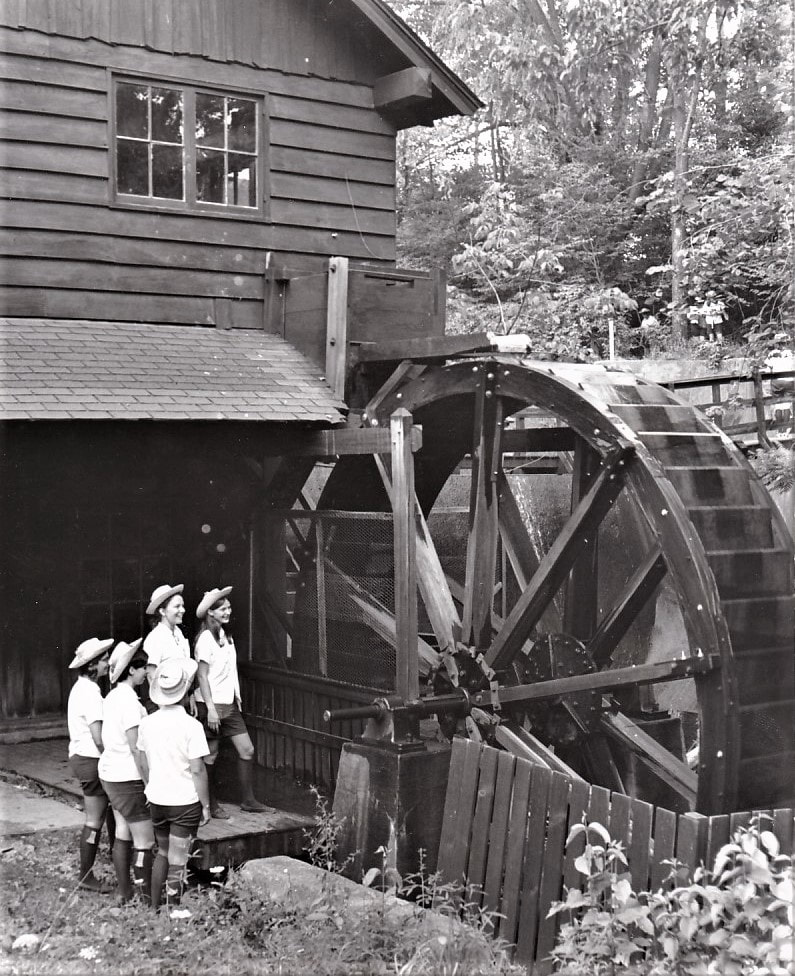 In 1976, for the national Bicentennial, the mill house was made into a museum of the history of Girl Scouting in Cleveland. Former Girl Scouts and leaders from throughout the area donated or lent uniforms, books, posters, craft items, and much memorabilia for display in the museum. When the Museum was dedicated, the generator at the mill was reconditioned and lit the Museum.

​
The following is from "Lake Erie Girl Scout Council.......the First 75 Years A Council History 1912 -1987", compiled by the History Committee.  Narrative by Geogianna Bonds

"The Mill has stood in the council as a symbol of Girl Scouting. The energy created by its movement has given light to the buildings around it. Its rustic beauty has made a landscape come alive with new interest. And its endurance has proved the value of sound foundations and constant purpose. Girl Scouting shares its honor as a landmark of positive influence in the lives of girls."
​
In 1993, the mill wheel was again rebuilt using the original materials.  Stan Polo, caretaker of Crowell Hilaka, recalls seeing the wheel when he first started to work for Girl Scouts.  "They brought in Amish craftsmen. They took the wheel completely apart and spread the pieces out on the hill."​
​The Millwheel Newsletter

The millwheel was so distinctive that it was used as the name of the Cleveland Council and the Lake Erie Council newsletter for generations. "The Millwheel" masthead was often re-configured, re-invigorated, re-designed, and updated, but in whatever incarnation, Kirby’s Mill remained as an enduring symbol. 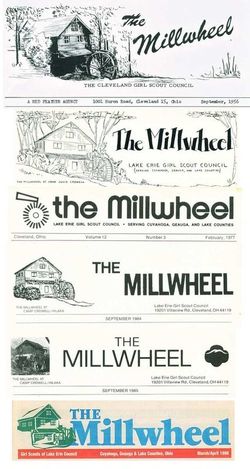 Millwheels have to be replaced periodically due to their constant exposure to water and weather. The average "life span" of a wheel is 10-20 years. We know the wheel was replaced in 1968 and 1993.          It must have been replaced at least once before that, but records have been lost. 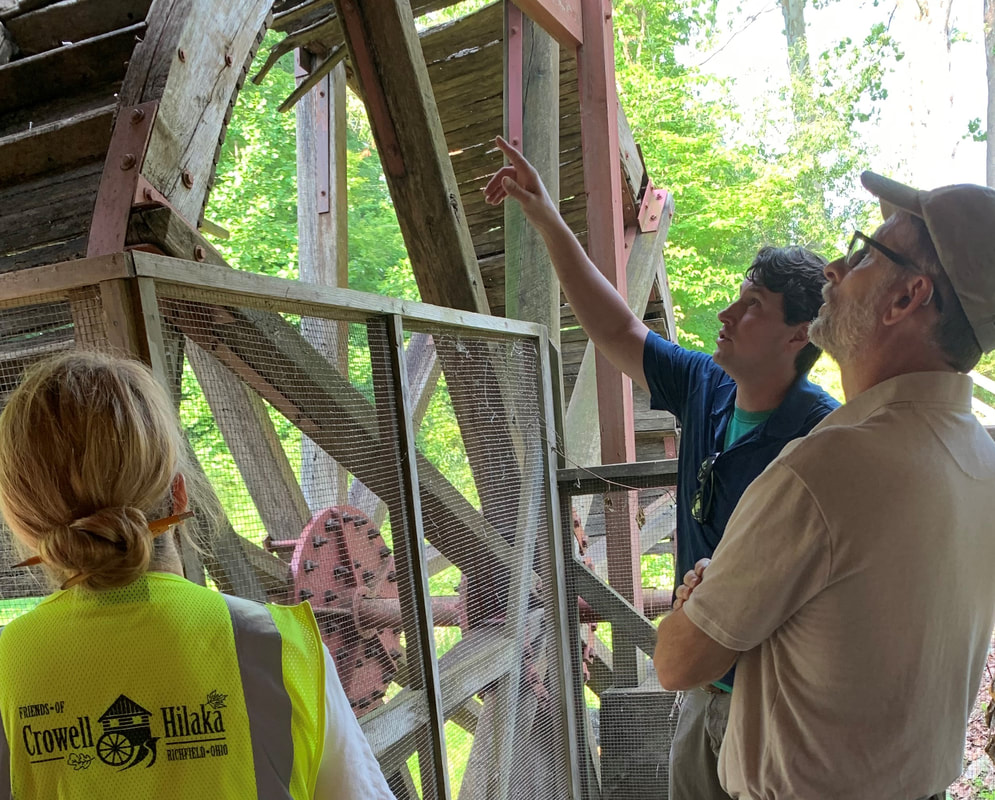 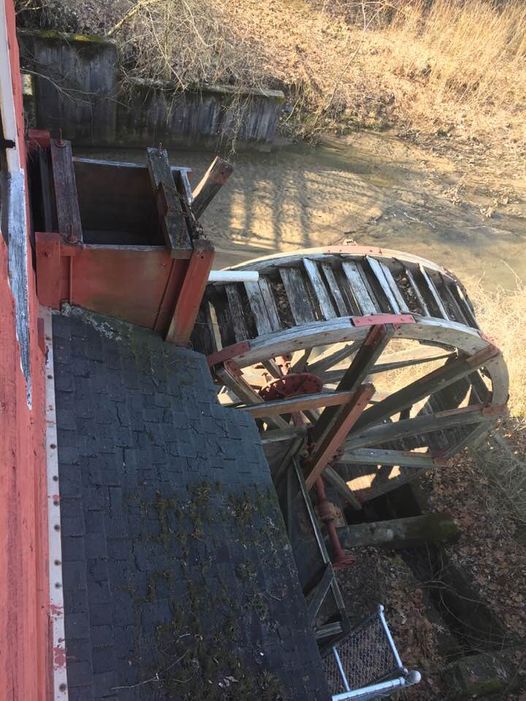 View of the water box and the 1993 wheel from above. Photo by Clive Fetzer