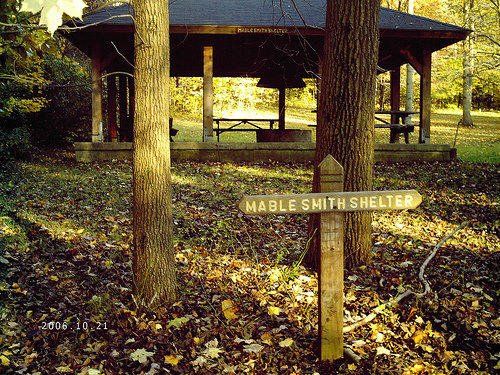 "Mrs. Mable Smith ... for ten years a member of the professional staff - and before that an active and ardent leader, district chairman and otherwise devoted Girl Scout Adult - is taking a leave of absence.  Many of you know and love Mable and have learned from her not only some camping skills and how to identify that little winter bird, or that tree by its shape and bark, but also those deeper appreciations that make us look longer and listen more quietly to the beauties of our earth.  While Mable is convalescing, if you'd like to drop her a card, her address is: 1458 Bennett Road, North Royalton, Ohio. "

A Living Memorial Planned for our MABLE SMITH

"Mrs. Mable Smith, active in Girl Scouting for the past 24 years, had completed 10 years on our staff in September, 1956.  Previously, she had been a volunteer leader, camp committee chairman and chairman of the then Northwest District.  She came on the staff as a Troop Camp Director and led our council in a vigorous troop camping program.  As a result of her vision and leadership - educating, urging, and dreaming for the years ahead, Cleveland has one of the most outstanding programs anywhere.  To know her and work with her was always to move ahead, regardless of obstacles, because Scouting, which to her was synoymous with life, was tremendously worthwhile.  With her passing from our midst, it is well for us to remember that we can carry on with her plans and thus attempt to reconcile her death with a living memorial.  A few weeks ago she sketched an unique shelter with a central ceremonial fireplace of lovely design.  It was her request that memorial contributions (in lieu of flowers) and money from her estate pay for this structure to be built at Camp Julia Crowell.  We can now work toward making this structure a reality.  All contributions of whatever size will be appreciated.  Beyond this material evidence of our esteem, we can pay her a more fitting honor:  we can let this structure symbolize our renewed dedication toward making real in our lives those qualities that we loved in her.

Junior troop 131 (with cadette and senior tag-alongs) camped at Mable Smith Shelter.  The weather alternated between drizzily and thunderstorm.  The rain stopped long enough to allow for the planned canoeing adventure, but most of the rest of the time was spent hanging out in the shelter.  We had about 23 girls in the troop, plus me, my co-leader, and a twenty-something helper.  Space was not a problem - dry firewood was.  Whatever wasn't soaked was damp.  After several failed matches, we hit upon an ingenious plan.  We gathered the driest of our damp tinder and kindling to have at the ready.  Then we delved into the troop gear and took out the wooden clothespins that were supposed to be for hanging dunkbags.  The girls lit a couple of grimey old candle stubs, which burned long enough for the clothespins to catch.  After that, we built up the fire with damp wood until we had a steady, roaring blaze.  I accidently melted a pie iron on that fire!  We've loved Mable Smith Shelter ever since.