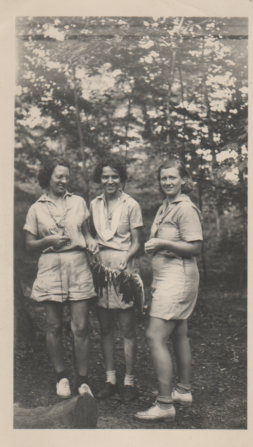 Fishing near Innisfree campsite 1939: Pater, Kinta, Copper
July 1931 - began summer job in Girl Scout Camp work as dietitian ($150 for summer) - my duties included ordering and planning meals, supervising cooking, helping prepare when cook went on break - camp land was loaned to the Girl Scouts for free by dentist (Dr. Hoert) who owned farm with lake in Burton, - we had our own cabins and put up tents, the only permanent buildings were dining hall and kitchen - worked there for 10(?) summers, Met Zanie Edwards at camp, she was the camp dramatics counselor, around age 35 (15-20 years older than me) – her real job was as guidance dean at Roosevelt Junior High - she was born in 1892 in AR - she also attended Western Reserve, got her masters there in the 40s – she took me under her wing to sophisticate me, felt as though I needed polishing – I got my first touch of playing bridge, meeting interesting people, tea party stuff, house guests – she had a great summer house in “The Lagoons” of Vermilion OH - through her I met Frances Liston and Mildred Rupp; I had known Mildred's sister as a classmate in college, also the Woods girls, Priscilla Tyler, Lola Hoskin (nickname “Skipper”) who later directed Seattle Girl Scout ​

​August 1936 - moved back into Cleveland after summer at camp
In February 1937, the Girl Scout troop that Catherine volunteered for came up with a novel idea to help raise funds for the new camp. 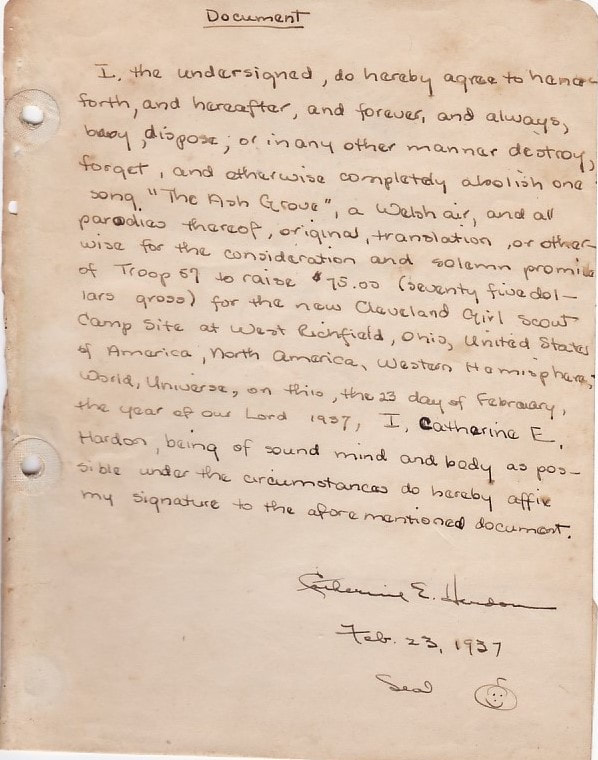 ​At that time, the Cleveland GS Council was embarked upon a massive campaign to purchase the Kirby estate.  Several prominent Clevelanders and corporations had already pledged support. The “public campaign” had launched on February 10th and was nearing completion. Girls from all over Cuyahoga County were looking for creative ways to raise the rest of the money needed to buy a year–round camp of their own. Troop 57 found a unique method.

Written by a representative of Troop 57, this contract demands that the song, “The Ash Grove” be henceforth buried, destroyed, forgotten and abolished. And in case that wasn’t clear enough, no translation or parody of the song could be sung, either.

In exchange, the girls of Troop 57 agreed to raise seventy five dollars for the purchase of the new Girl Scout camp site in West Richfield. According to a couple different websites, that would be worth just over $1,300.00 In 2018.  Serious money.

Girl Scouts of that era made it a point of pride to sing elaborate, often poetical, songs at camp at every occasion. Songs included rounds, graces, ballads, hiking songs, international songs. There were rounds, harmonies, and descants. One can imagine Catherine  trying to pound this beautiful, classic tune into the heads of these girls so they can do themselves proud at camp. Only they are having none of it!

It is signed by Catherine Hardon.

As we now know, the campaign to buy the West Richfield property was successful.  We do not know if the girls made good on their $75 pledge.  Or if any of them remembered The Ash Grove in spite of themselves.

We do know that Catherine kept the "contract" in a silver frame  for the rest of her life. 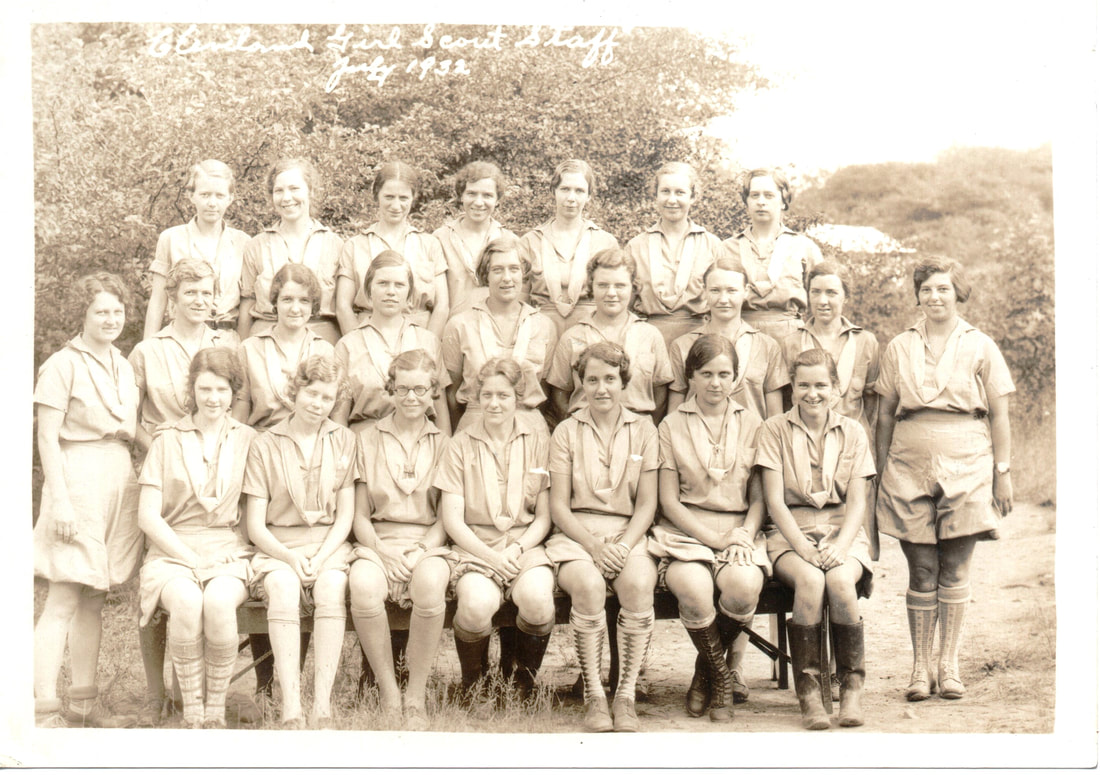 "Cleveland Girl Scout Staff July 1932" Kinta is in the middle of the back row.
July 1940 - drove cross-country in 1939 Ford Coupe across northern states to Washington with Dorothy Dubois (swimming counselor) and Dora Wood (nature counselor) – I worked as unit counselor for  6 weeks in Girl Scout Camp Lillywop near Everett where my friend Nola Hoskins was director.