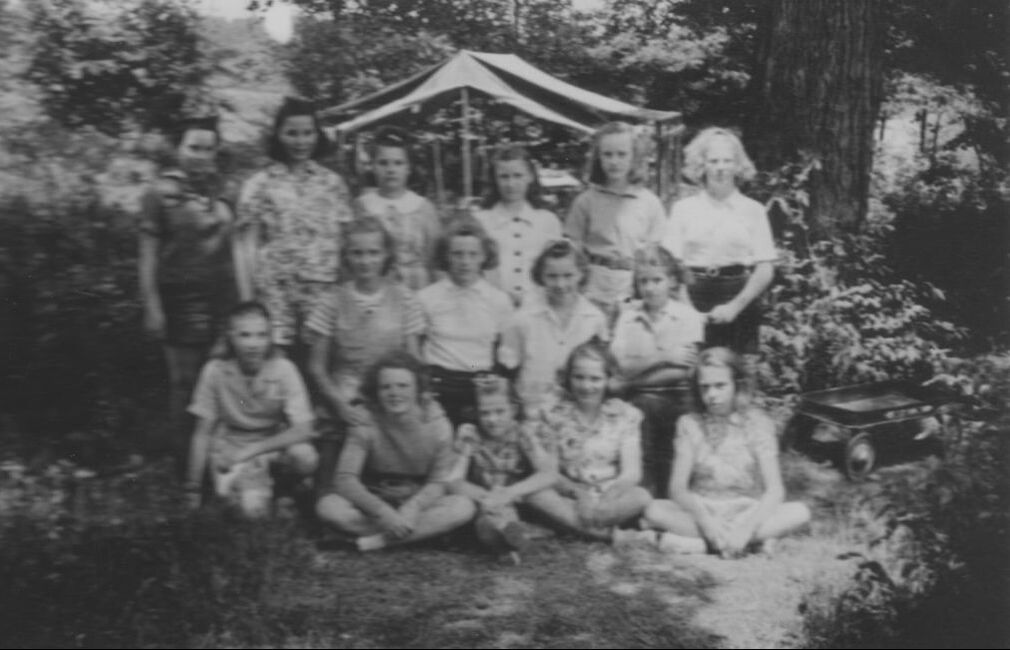 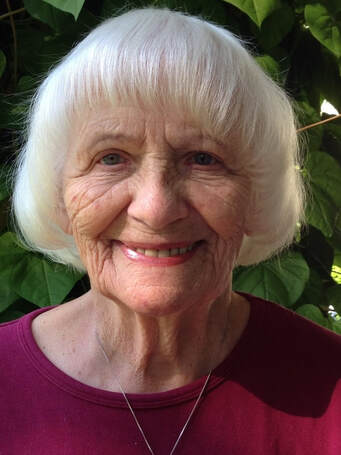 She was a quiet child who was content playing alone. She decidedly did NOT want to go to any camp.  "My older sister went  to camp, but that did not mean that I had to go.  I was really fearful. I did not want to leave my home and be with strangers."

June's father, a dentist, had previously toured the Kirby estate when it was first put up for sale. He was part of a consortium interested in buying it for a private country get away. The deal fell through and Kirby sold to the Cleveland Girl Scouts instead. But Dr. Story thought that his shy daughter should be able to take advantage of it.

June was twelve years old when, with "fear and trembling and a bedroll ", she went to camp with two friends.  They were assigned to the Windy Hill tent site.  "Windy Hill was the farthest unit.  Way back, up the hill, way beyond. We thought we were really something. Almost  like we were renegades."    She survived the two week session and then , " As soon as I got home,  I was homesick for camp.  So my father signed me up for the very last session at Julia Crowell that summer.  And I went back.  All by myself. No friends. But I sure made friends! That was a wonderful experience."

At age 91, these are her camp memories that still stand out:

"Swimming a certain length that got me a green cap. It gave me certain privileges to be allowed to swim to certain parts of the lake.  ." Red caps were for beginning swimmers; yellow for the more advanced beginners. "I was working toward my blue cap!"

"I learned to canoe. That was a big step for me because I hadn’t really been on the water with a boat much before."

" Another thing I enjoyed: cleaning the latrine with Lysol.  I know I didn’t like to do it, but it was sort of fun to make grimace faces and say how awful it was that you had to do it.  But I was thinking: you know what? I’m doing it!

Most of the time, the girls ate in the dining hall. Sometimes they had cook outs in their units.  "Sometimes our counselors would scatter cereal boxes in the woods and we would have to hunt for our breakfast and  bring it back to the unit to eat".

Their unit made a log bench for the camp. June remembers drilling the holes for the legs and helping to sand everything smooth. Everyone helped. "Quite a lovely piece when we got through".

When talking about two of her most profound experiences at camp, June's voice changes with remembered excitement as she tells the stories:

"We took a cross-country hike. We had our bedrolls around our necks hanging down on either side. Packed up our provisions.  We were going through farmers’ fields and across country lanes. The countryside was quite a bit more sparse then. We saw so many things you would just never notice in a car on the highway. We took a whole day just to get to the barn where we had to sleep at night. We ate our provisions on the go. Then hiked back on a different route. It was like pioneering."

One of my great joys was a camp out that we took from all the units to a field at the Upper Lake. It wasn’t Hilaka then because the Girl Scouts didn’t own it.  We spent the night out on the ground.  We didn’t have sleeping bags, we had bedrolls.  Watching the shooting stars.   That was a major, major night. Across the lake, there was something that looked like a castle.  We weren’t allowed to go over there, it was a forbidden castle. [Twenty years later when Girl Scouts bought the other side of the lake, the "forbidden castle"  was given the name Amity House].

When asked what difference Camp Julia Crowell made in her  life,  she says emphatically, " I learned that if I didn’t try something, I’d never be able to enjoy it.  I learned that at camp for sure because I let go a lot of my fears."
June Story was born in Cleveland in 1925 and lived in the Cleveland area her entire life. She went on to become a Girl Scout leader for her three daughters.
The oldest daughter, Joanie, is the coordinator of the Crowell Hilaka Memories Project.