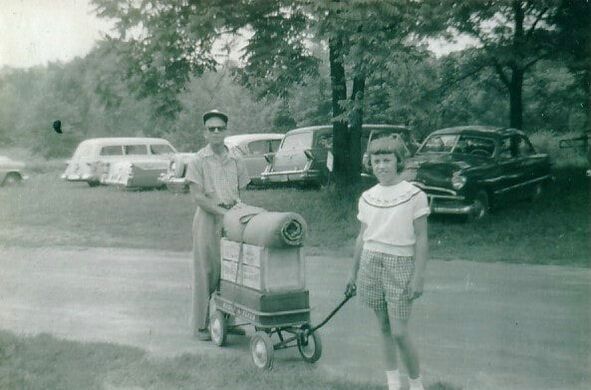 I am having a fine time so far at camp.  We went to the mill wheel and over the swinging bridge today and you have to go over it one at a time. Everyone likes my teddy bear. We made name pins out of thin pieces of wood cut from the end of a log. Mine is almost finished.

We went on a hike with the conselers in the sunshine . When we came back we were drenched to the skin.  Our tents were all up and every thing was soaked. My clothes still aren’t dry. We came back to our tent and got in dry clothes.

We went on a cookout to the Hilltop house and forgot the spagetti noodles so we had sloppie joes instead. Dandie spilled all our milk so we had water instead.  We couldn’t get the fire started but we finnaly did. We sure had a lot of excitment yesterday but it was fun anyhow.

I am a hopper today. The hopper is the one who sets the table and fills the second, third, fourth, fifth, and sixth, etc., helpings. I’m jumping up and down so much I hardly have time to eat.

My counslers are Dandy, Breezy, Burch, and Dusty, the Slurgus girl. We also have two C.I.T.’s;  Sparky Embers and Spike Nails.

I hope you are having fun at home.  I got your letter.  Who are the Fedricks? I’m having lots of fun at camp.

P.P.S.  Sorry I was so late in writing

P.P.P.P.P.P.S.  Have you found my sunglasses yet?  Although I haven’t really needed them. 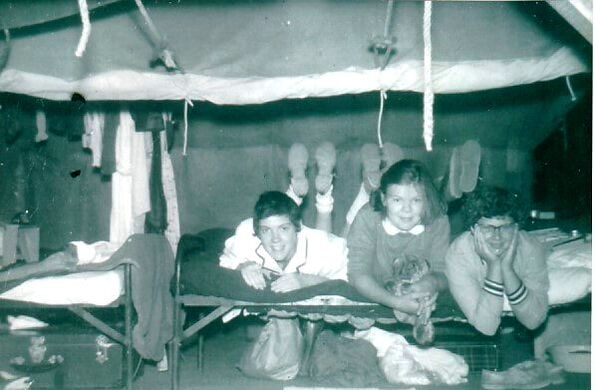 I plan to write to Kathy pretty soon and I’ll write to Carol Saturday or Sunday.

Did you ever hear of Lemme sticks?  Our unit has the Lemme stick craze.  I’ve made a whole set for two to play already.  I know all 7 of the numbers to play.

I passed my boating test, and passed into the intermediate swimming group, the first time I took both tests.

Right now my teddy bear is being used as a note passer. We write a note and tie it to him and throw him over to tent three. They read it, write us a note, and send him back to us again.  We keep on doing this until rest period is over.

Alicia, a girl in tent two, says she has a teddy bear just like mine except except it has one eye missing and doesn’t have a green tongue, and a red button.  She was going to bring him but she forgot.  She wants to sleep with mine some night.

Jane Johnson, a girl in my tent, is in Ann Ruggles’ Girlscout troup, and Eldie McCoy’s cousin is in my homeroom at school.

I DON’T MISS YOU!

Laura Kirby , about age 4, visiting CJC with her family.
In a 2020 interview with Laura she said, " I loved camp! I was an only child & suddenly I had all these new friends.”

In some ways, Laura had a unique relationship with the Camp Julia Crowell. Jim Kirby was her grandfather. Sometimes during family gatherings at Grampa Kirby's farm, the family would take a little excursion down the road to the Girl Scout camp.

Laura first went to summer resident camp in 1958. She returned in 1959 and was there when the girls were hit in a lightning strike. The next day, all the campers were gathered around a large campfire circle. The councilors were so upset they couldn’t articulate what was wrong. One of them finally said, “One of you is no longer with us”.  Another councilor came up to Laura to tell her that her grandfather wanted to see her. She got up and followed the councilor down to the camp office.

There was her Grandfather and his wife Nellie, standing by their car. Once they saw that Laura was alive and well, they turned and left. At the time, Laura didn't give the visit much thought. Later she realized that her grandfather and Nellie must have heard on the radio that a Cleveland Heights girl had been killed at the camp, but the victim's name was not released. They must have rushed right down the road to check on her.

A few days later, the girls in her unit received an invitation to visit Grampa Kirby’s workshop a short hike away.  He gave them a tour of the farm and showed them the inventions he was working on. 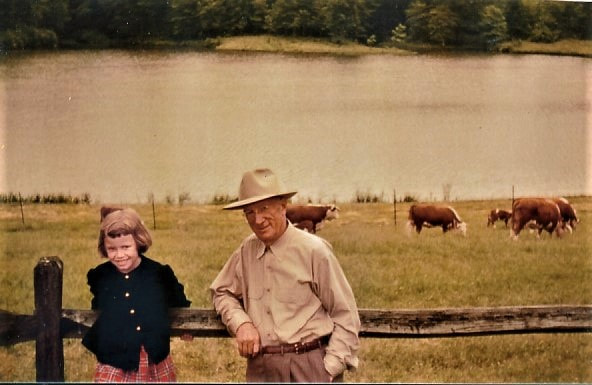 Laura and her grandfather JBK at his second Richfield farm.
After high school, Laura attended college in Michigan and and worked summers at Yellowstone National Park. After hearing Scott Mckenzie's song about San Francisco, Laura made her way out there and arrived during the "Summer of Love". She now makes her home in Marin County, California where she is a renowned artist.