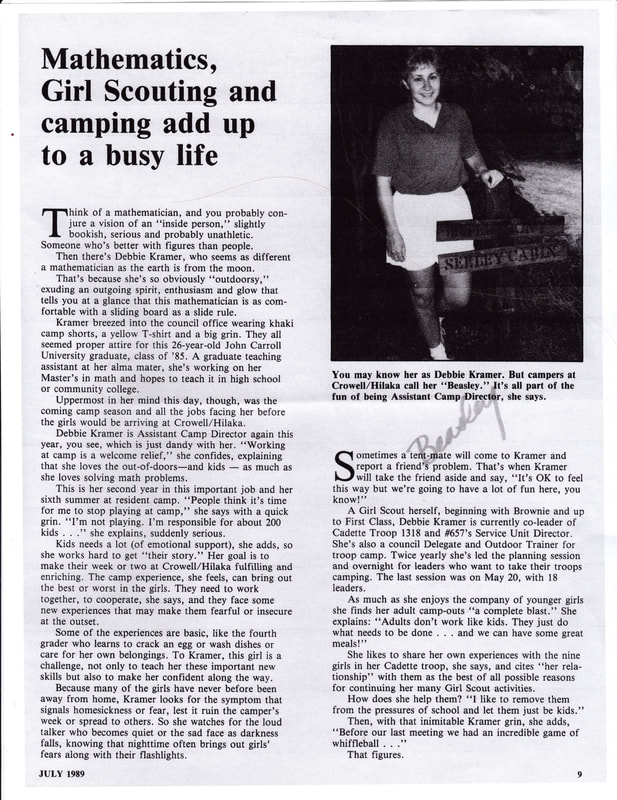 Article from The Millwheel, July 1989
Girl Scouting was an important part of Debbie's life as she grew up.  As a young adult, she embraced service in and through Girl Scouting as a troop leader and working a variety of roles at summer camp from 1984, through the final days of Lake Erie Council in and beyond.​
It was during her time as Director of the resident camp program in 1991 that Debbie reflected on the changes in camp programming. "...restructuring the camp in the next few years because 'parents want it' is not a good idea. With 994 girls applying and only 878 getting placed, it seems like there is a demand for the type of program we are offering. I don't think our accountability to parents includes letting them choose the structure of the program It includes running a program which can be administer in a way that enables staff to take care of their kids. If camp is going to be reorganized because the council feels that it would be a better program, then fine.  Disregard all previous statements.  But, that's not was has been indicated to me."

In spite of her doubts, Debbie continued her dedication to outdoor experiences for girls. Among other programs, she served as director of the Wilderness Trek based out of Camp Lejnar (1996-2000), and as director of Discovery Days at Hilaka (2002-2007).
​

Debbie (at far left) with family and friends of Lisa Lee Pruett in Spif's Garden, 2008.
A tribute to Debbie's own Troop Leader, Mac Sauer

There was a shy kid who needed a place to belong.
She wasn't afraid of the dark -  only what was in it.
Mac took her in.

Mac introduced her to backpacking
and she and her group walked in circles
in Chapin Forest,
while Mac and Mickey panicked.
Backpacking has now become a part of her life
and she has shared that knowledge with many Girl Scouts,
nieces and nephews,
adult friends,
and her own son.

Mac taught her responsibility,
like when they forgot the dishpans
and learned to live without.
Living with natural consequences
is an important lesson -
one which we protect kids from today.

They went on week-long trips,
learning to cap without being a slob.
And Ben drove a van,
and taught drinking songs.
"McCarthy is dead and McHenry don't know it..."
And Lisa got left behind
because they had to get the Catholiuc girls to church
nd everyone left in a hurry.

They did Catch Today camp...
"Catch Today and hold it fast,
live each moment before it's past"
They slept in jungle hammocks,
and met girls from other places,
and broadened their world,
and learned about differences.

Mac taught her leadership.
She was proud to be president of the troop
and felt a sense of belonging
that she didn't get anywhere else.
She organized and planned
and learned not to forget things,
like dish pans.

She wanted a new job
where she could give back
and enjoy the out-of-doors.
Mac helped her get a job at summer camp
where she worked for many years.
She continued to grow,  to lead,
to appreciate,
And she didn't forget things,
like dish pans.

She passed on the lessons:
Leadership, responsibility,
appreciation of differences,
backpacking, programming,
and living in the natural world.

She passed on the lessons
to many young girls,
and to camp staff,
and adult volunteers,
and nieces and nephews,
and to her students, and to her own son.

She is different today
and others are too,
​because Mac took her in.