National Senior Roundups were camping events that drew girls from across the United States. They “gave the girls a sense of belonging to a strong and unified organization” 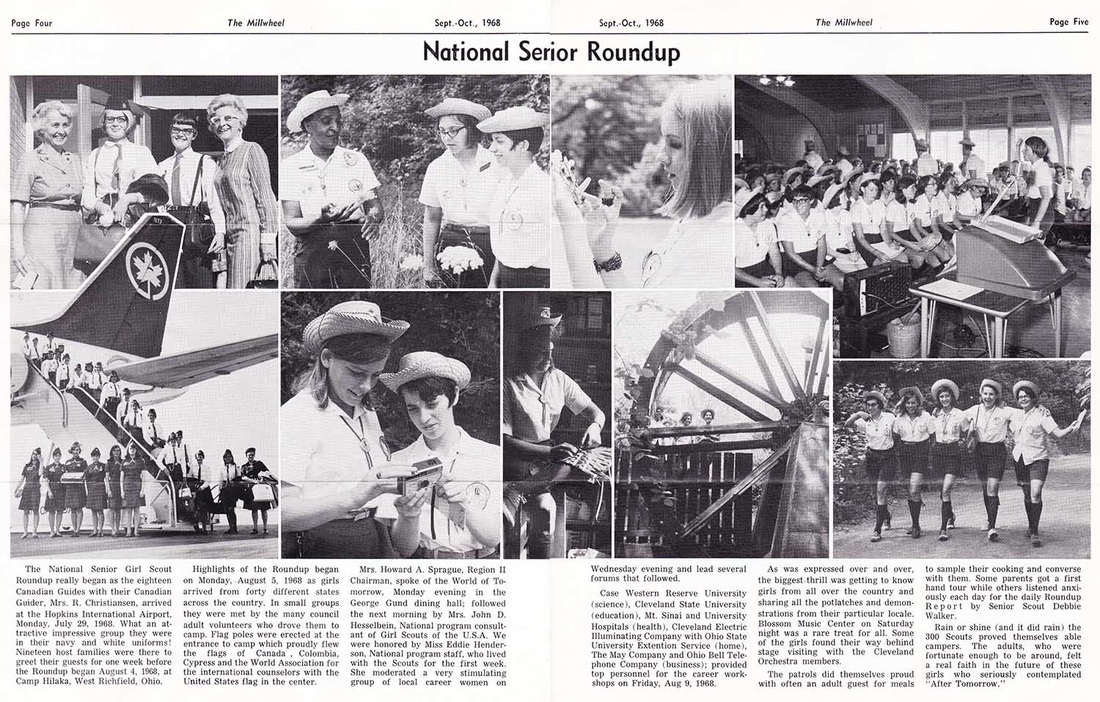 (Click here for a larger, more readable version of the above image.)

A memory from a participant:

Wow- what a trip down memory lane! I definitely recognize the picture in Hall with the speaker.  Our Patrol was sitting in the front row.  The girl on the speakers right with the hat on is Debbie Walker.  She was from Solon Ohio, but I have lost track of her over the years.  That is me right next to her.  I feel so old.  I have never been good at names, and have gotten my own two daughters confused often.  If I saw the names I might be able to match them.  One of the girls that I traded potlatches with was from McComb, Ohio,  She was trading small bricks, and I had that for ages!  I think of her often, since my daughter now lives in Henry County, and we pass the sign for McComb every trip.  Of course we all had camp names- so that makes it harder to remember "real names".
The career trip to the Illuminating company we learned about a new oven that would bake a cupcake in minutes.  of course we had no idea that we were witnessing the Microwave! That still amazes me.  I often share that bit of history with students, but they cannot believe there was ever life without microwaves!
The evening at Blossom Music Center was very special, memorable.  Just being part of such a large group, all in uniform, but I can't remember if it was camp or dress uniform, Something that I miss, the uniformity- the sense of belonging.  This was the time of "Free Love" "Flower Power" "whatever feels good" ,  It was the beginning of the end of rules and structure as we knew it growing up.  But I still remember how good it felt to know there was a right and wrong, a sense of community and responsibility,

Thank you so much for sharing!

“ I was 17. The Roundup was a particularly special event for me, because I was never able to attend resident camp. I was active as a Senior Girl Scout at the Council level, Senior planning board, and I don't know what else. I just remember how independent I felt going to meeting at the Council office in downtown Cleveland. (I grew up in Chagrin Falls.) I met Debbie Walker and her family from Solon. Mrs. Walker was an active leader and encouraged me to get involved. I think it was through her help that I was able to attend. It was awesome to camp in a tent, sleep on the ground, cook our own food. We went to Blossom Music Center for a concert. And we had a demonstration from General Electric: we got to see and hear about this new oven that they had just developed that could cook things in seconds! Who knew that we were getting the first peak at what be a life changer, the microwave oven!

For me, it was a life-changing event. It gave me confidence that has lasted a lifetime. I was blessed with two daughters and spent many years as their leader as well as being active at the council level in at least three different councils, and worked as a Community Membership Director for Great Trail and Heart of Ohio GS.

Thanks for reminding me just how important the activities for the girls, even though they may not be able to thank the adults at the time.“ 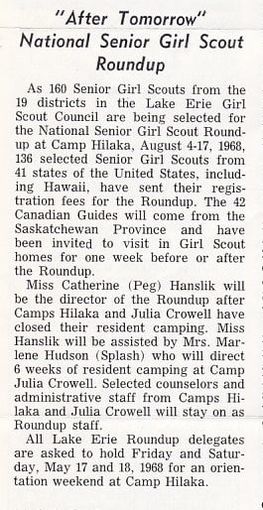 ​History research delves deeper:  Having posted the above information, and being all proud that Crowell Hilaka had hosted a national event,  I was very surprised ( and dismayed ) when GS historian Ann Robertson posted a blog entry that the Round Ups only took place in 1956, 1959, 1962, and 1965!  No 1968.   I wrote to her to refute this and included a copy of The Millwheel article.  She researched further and discovered that while plans had been in place for an official National Round up, it was cancelled.  Reasons were never made completely clear.  It may have been in part because GSUSA relied on the military to help support the event, and in 1966 military resources were diverted to the war in Vietnam.  Ann's blog post here

Several regional Round Ups events took place, even though they called themselves "national".  This may have been done with the blessing of the National organization.  It seems a little too coincidental to me that the international visitors to the Ohio "National" Round Up all came from countries beginning  with "C".  It suggests some national coordination in assigning visitors alphabetically. 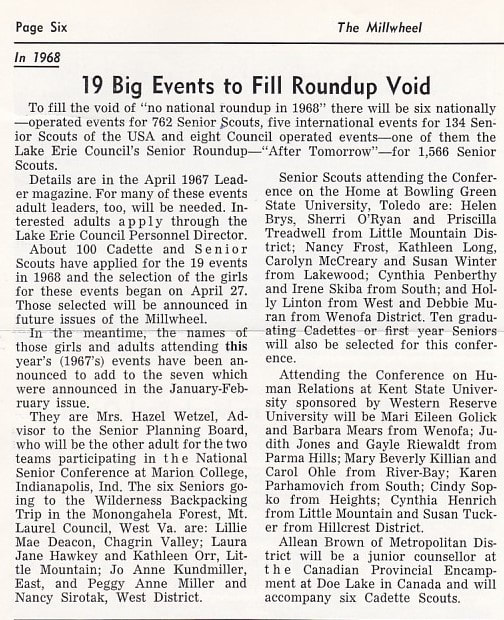