Crowell Hilaka
Everything in Readiness – Merchants at the Oceanside Shopping Center which has its grand opening Friday and Saturday have everything in readiness for greeting the thousands of shoppers expected to visit the modern facility on the opening days. Plenty of parking space is available.  The Oceanside Merchants Association has arranged program of entertainment practically every hour of the opening days.  A brand new 1957 Buick hard top two door sedan will be given away absolutely free by the merchants with the drawing taking place Dec22. TV stars will appear in person during the opening days including Major Bob Lynn Tumbleweed and his famous bear and Uncle Dan.  Hundreds of dollars in additional prizes will be given away by the Merchants of the 27 stores in the center. Pompano Beach High School Band will appear Saturday at 11 a.m. to present a concert. Radio station WWIL will broadcast direct from Oceanside Center on Friday from 9 to 12 and 3 to 6p.m. and on Saturday from 10a.m. to 1 p.m. and 5p.m. to 8 p.m.  Best of all for the youngsters, Santa Claus will arrive at 4p.m. on Friday with free gifts for all the kiddies and will be present all day Dec. 1 and every day from Dec.10 to Christmas.  Nothing has been spared by the developer James B. Kirby in the construction of the center and the merchants association in providing the entertainment and welcome to the shoppers. 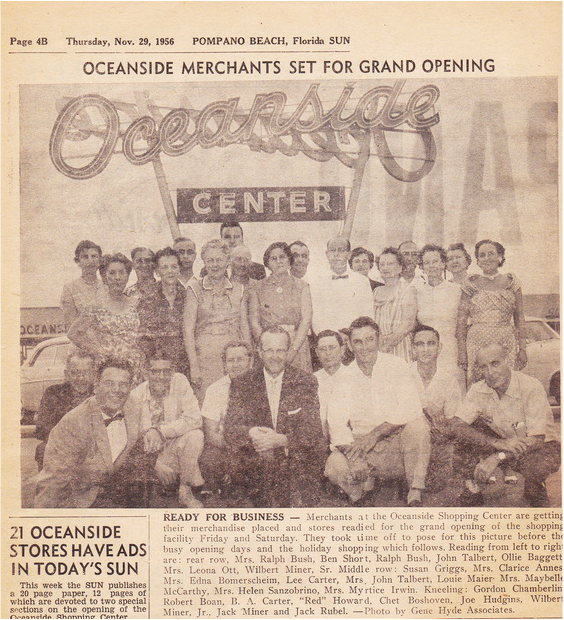 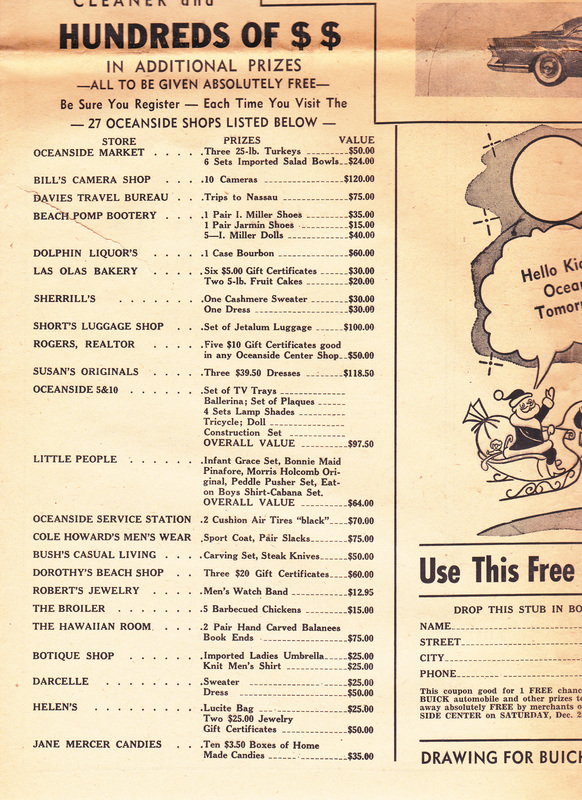 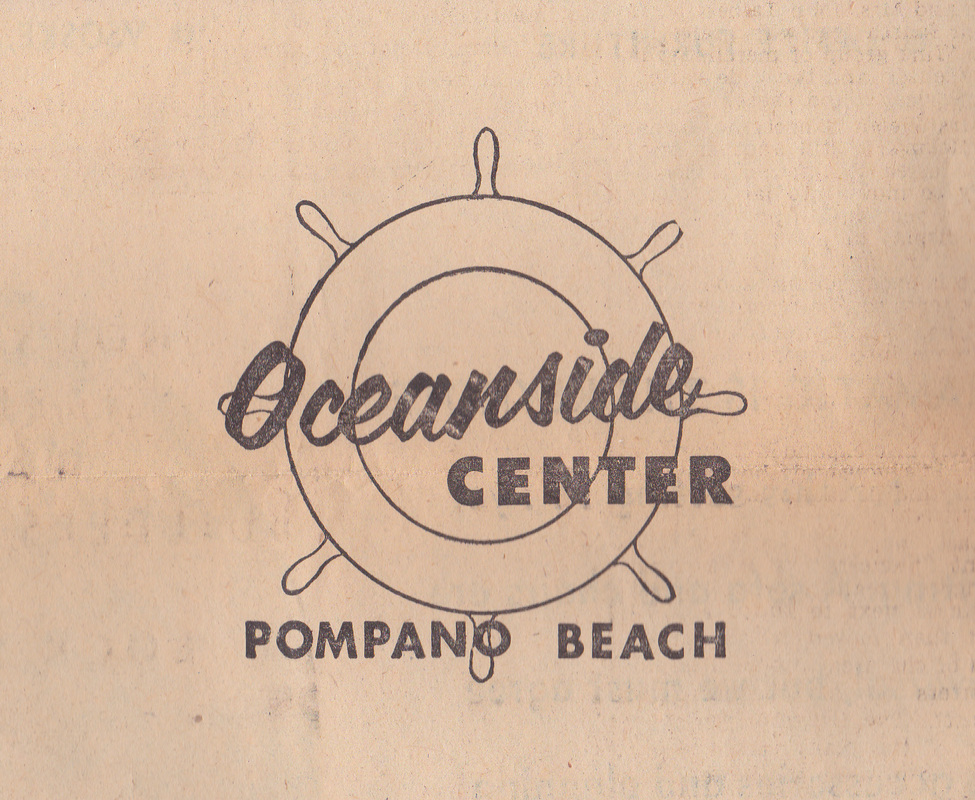 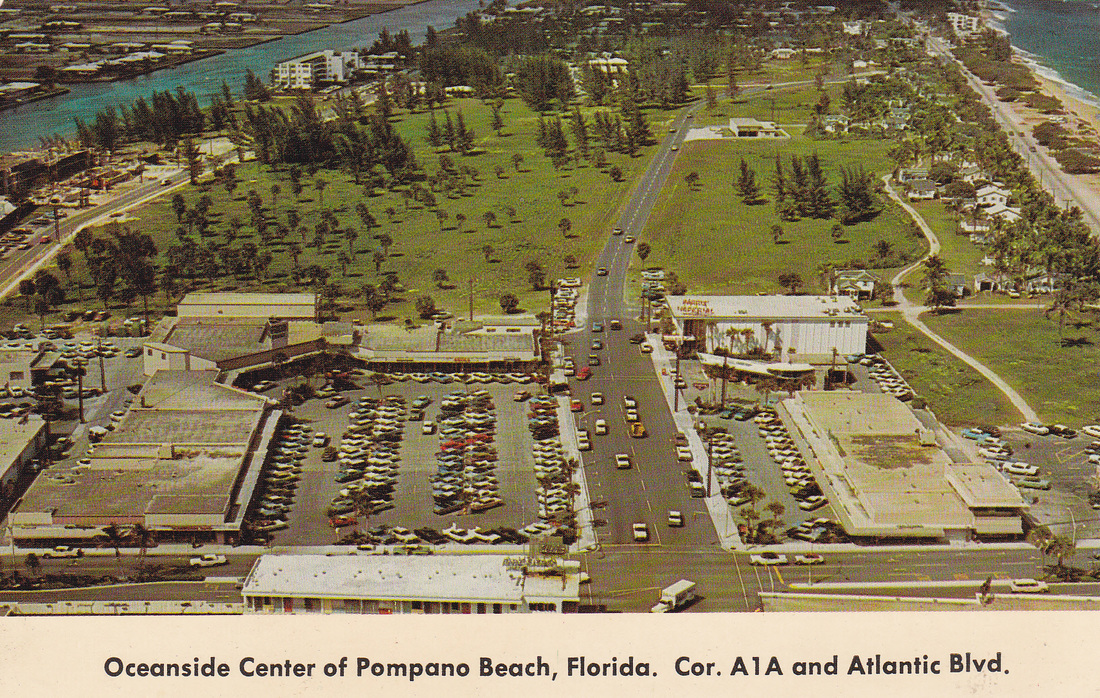 Portrait caption:  James B. Kirby – The beginning this week of a modern restaurant in Oceanside Center marks the final phase in a dream come true for James B. Kirby.  The restaurant is the last building to be constructed in the shopping center which celebrates its first anniversary today and tomorrow.  Mr. Kirby purchased the property and began construction of the center a little more than three years ago.

The man behind Oceanside Shopping Center is a tall, distinguished gentleman whose reputation for an inventive mind is on par with his ability to foresee when and where real estate developments are needed.   Ask any merchant in Oceanside for an opinion on James Kirby, developer, and they will bend your ear with words of praise. “He is known for his friendliness and his sincere endeavor to bring and attractive center as well as needed services to the community” is their summary.

Mr. Kirby, who also heads the Kirby Cleaners with 5,000 salesmen operating throughout the United States, originally came to Florida to “vacation”.  But the allure of the golf courses didn’t hold the interest of this active man for long.  Seemingly, he was born with a creative and mechanical mind which took action at an early age with youthful experimentation taking clocks apart and putting them back together again.   He was not discouraged in this occupation by his father, an engineer on the freighters of the Great Lakes, or his mother, whom he says was “not far behind as an engineer. She was always making something or doing her own repairs.”  More often when other youths were flying kites, James Kirby was engrossed in his own experimental shop set up with the help of “Dad”.   “In those days I used to have fun taking the mechanism from eight-day clocks, cutting spools in half for the wheels, using laths for the tracks, to make railway cars.  I had several of those running in and out under the barn.   When a little older he designed an electric train for a younger brother. “I wound my own motor, pressed the tracks out of tin, and when it was finished I believe I had more fun with it than my brother!”

Industry combined with his alert mind has followed Mr. Kirby throughout his career.  In high school, he had various jobs to earn his own extra money. One was lighting gas lamps at dusk and turning them out at daylight. ON Saturdays he cleaned the old fashioned lamp posts. For this he received $16.50 a month. On a recent return to his gas lamp route, he found it was four miles in length. Can one imagine a youth today covering four miles each morning and evening and then walking mile and a half to high school?  That was a normal day for a man who was later to rise to business fame.  When he first came to Florida for winter visits about nine years ago he was warned to keep out of the real estate business or he might get his ”fingers burned”.   But Mr. Kirby doesn’t frighten easily.  Away fro the sphere of his own business he was not content for long to spend his time on the putting greens.  “ I looked around for something else and began taking real estate with friends.  There was an auction along the intercoastal on southeast 12th street, very close to where we stayed.  All that day I stayed away for fear that I might purchase some of these lots. Late in the afternoon the auction was still going on and I stopped to talk with the owner. They only had about three lots left and I finally bought the last one. This was my start in Florida property.“ Since that time he has purchased and sold many parcels, all in Pompano Beach.  “And I haven’t had my fingers burned yet”. He laughed.

“ I gradually got acquainted with a few of the realty brokers and one day while I was in Dick Rodgers’ office, I was told about the four acres on which Oceanside is built.  Under the terms of the lease, I was required to build during the first year and during the construction and the leasing of the stores, it brought me into contact with people who were so cooperative and helpful that it encouraged me to plan the additional group of the present stores.  “I have attempted to make Oceanside Center exceedingly attractive for I feel that word of mouth is wonderful advertising.  We request all our stores to keep their windows cleared of merchandise that would prevent clear vision into a beautiful store.  We have covered walks in front, where people can stroll leisurely, looking into one beautiful window after another. My big mistake was in not coming to Florida many years ago.”