The eight-foot chain link fence topped with barbed wire was constructed the protection of the girls camping at Crowell Hilaka.  The date of construction is uncertain,  but it seems that it was sometime in the mid- 1970's.

But there was an unintended consequence. The fence kept out deer. 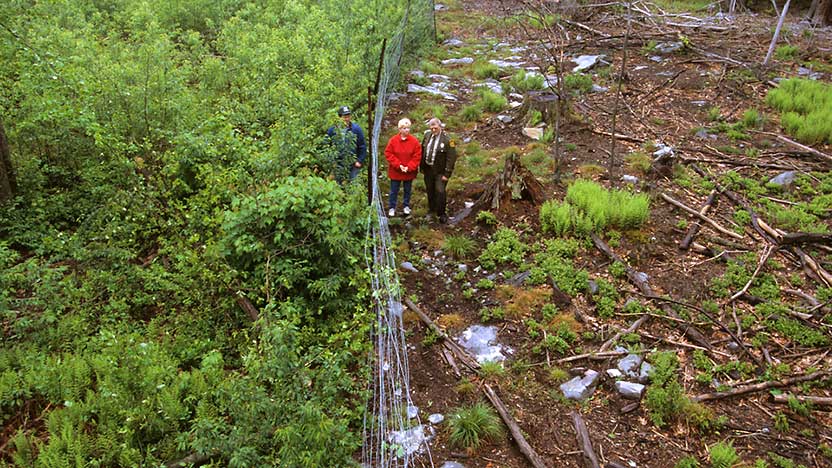 Deer exclosure fence in Western PA. The area to the right of the fence has been severally over -grazed. The left side has been enclosed and allowed to re-grow.
When GSNEO announced that they were closing Camp Crowell Hilaka,  FoCH contacted Eddie Denng of the Western Reserve Land Conservancy for help.  On a tour of the camp, Eddie noted the unusually healthy forest. Shrubs and wildflowers abounded beneath the large trees. There was no obvious browse line.  The perimeter fence had helped limit the deer population.

Eddie took his observations back to the Conservancy.  They agreed that the camp was an ecologically valuable property and  developed an assistance package for GSNEO. GSNEO declined the package in favor of outright  sale.  But when the property was placed on the market, Western Reserve Land Conservancy was ready with their best offer - and won the bid.

How much of the credit goes to the the fence?  We will never know.  All we can do is recognize that events played out the way they did  and recognize that the fence continues to protect the property.

When rampant white-tailed deer graze in forests, they prefer to eat native plants over certain unpalatable invasive plants, such as garlic mustard and Japanese stiltgrass. These eating habits lower native plant diversity and abundance, while increasing the proportion of plant communities made up of non-native species, according to a new study.


The findings were published in the open access, online journal AoB Plants. The study pooled data from previous studies conducted at 23 sites across the northeastern U.S.


By altering the balance of native plants in favor of a higher fraction of invasive plants, deer change forest plant ecology. In this way, invasive plants could have a bigger influence on the forest ecosystem and leave fewer opportunities for native animals who depend on the native plants. Such changes in plant community structures also have long-term impacts on forest regeneration, Averill said.
In the study, Averill and colleagues analyzed raw data from previous research. The data came from sites that each had multiple pairs of fenced and unfenced plots, where deer were mostly excluded from fenced plots. "We compared the plant communities where deer were excluded against the communities where they had access," Averill said.


The researchers were surprised to find that the diversity of invasive species - the total number of non-native species - and the total abundance (or land cover) of invasive plants stayed the same in areas where deer grazed and where they were excluded. Since deer find some invasive species unappetizing in favor of more palatable plants, deer indirectly promote the success of these invasives, Averill said.
​

"The study results suggest we should try to maintain lower deer densities through hunting and fencing if the goals are to support more native plants and foster reduced relative abundance of introduced plants," Averill said.