Western Reserve Land Conservancy ( WRLC) first became involved in 2009 when Lynn Richardson contacted them about the closure of Crowell Hilaka and asked if they might be able to offer GSNEO financial assistance to support the camp.  Lynn had been a member of the Tinker's Creek Conservancy and Lake Erie Girl Scout Council.  Coincidentally, both organizations went through mergers at about the same time: Lake Erie council became Girl Scouts of North East Ohio, and the conservancy became WRLC.

WRLC personnel were unfamiliar with the camp. Lynn arraigned a hiking tour for WRLC field director Eddie Dengg.  Eddie was impressed with the clean lakes and healthy forests and reccomended that the WRLC team prepare an assistance package for GSNEO.  GSNEO declined the offers of a conservation easement and grant assistance. 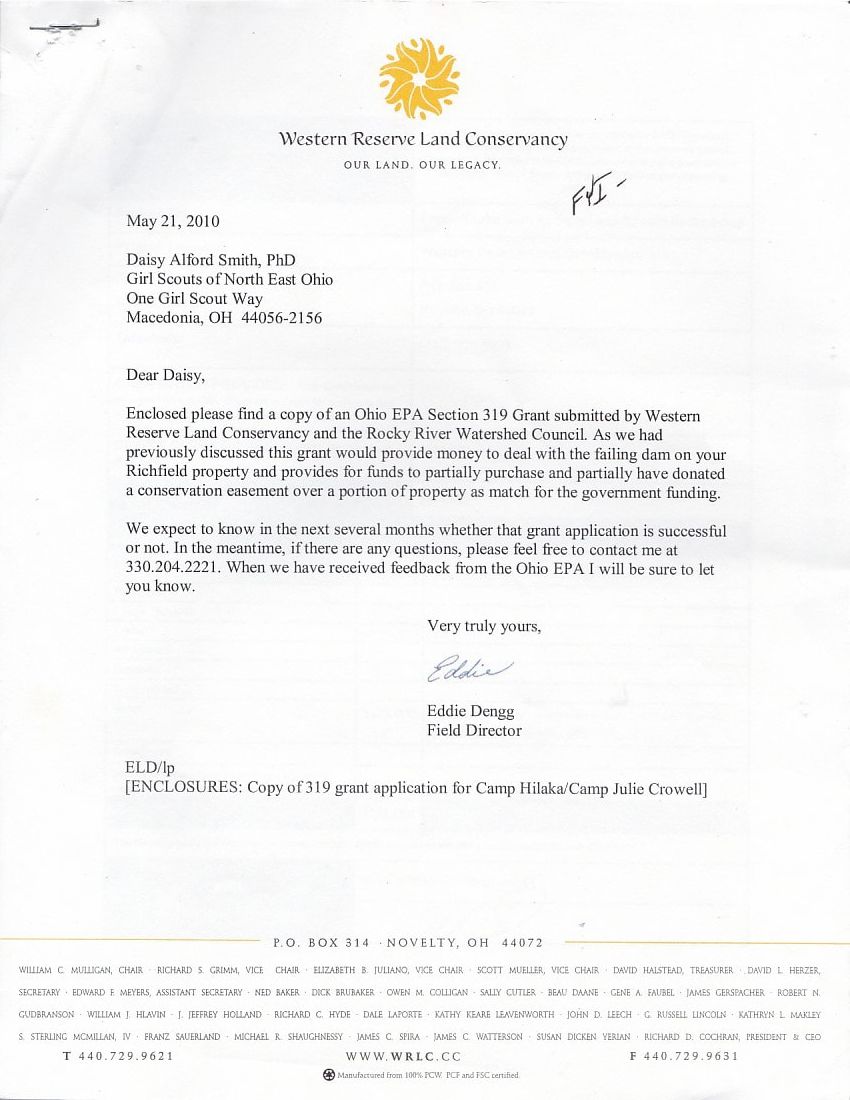 When GSNEO put four camps up for sale in 2012,  WRLC made the highest offer for both Camp Lejnar in Lake County and Crowell Hillaka in Richfield.

In June 2013, WRLC announced that it would relinquish its option on Lejnar, but not on Crowell Hilaka.  WRLC agreed to meet with FoCH to discuss terms.  FoCH launced a pledge campaign to purchase the propoerty and sought endorsements from RiCHfield Historical Society, Township, and Village.  WRLC obtained permission from GSNEO to allow FoCH to give camp tours to officials from these organization.  On seeing the positive response from these visitors, WRLC field director Joe Leslie suggested a public open house. FoCH agreed to organize it if WRLC could get additional permission from GSNEO.

In December of 2013, Richfield Village Council voted to request WRLC to ask GSNEO for an extension on their purchase option.  The extension was granted in 2014.  WRLC lent their Moreland Hills headquarters for meetings of the working group which supported formation of the Richfield Joint recreation District.  WRLC provided general support, provided advice, and facilitated the political campaign.

After Richfield voted to purchase the property, WRLC helped them to obtaining a Clean Ohio grant which partially reimbursed RJRD for a portion of the property purchase price.