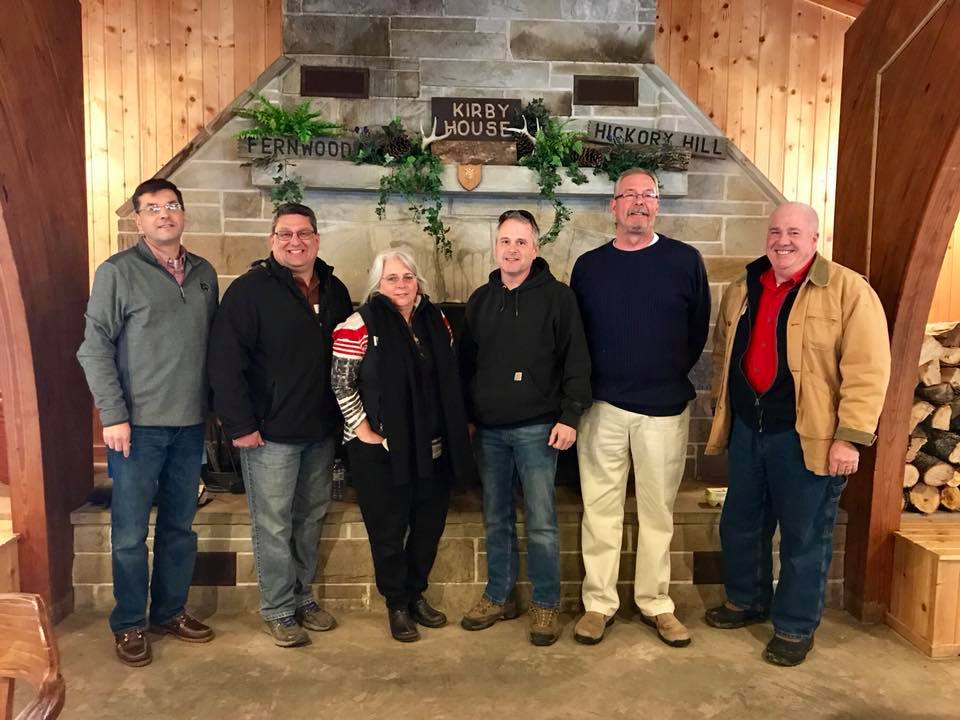 Programs included scheduled hikes, guided tours on request, the "Get to Know Your Park" lecture series, and the return of Trick or Treat on the Trail. 4th annual Kirby Day.  "Cozy Up to Winter Wonders".  Orienteering events.  An equestrian clinic. A clam bake.  5k runs and a 50K run!  Defenders of the Forest Earth Day Garlic mustard pull. Saturday morning volunteer opportunities. 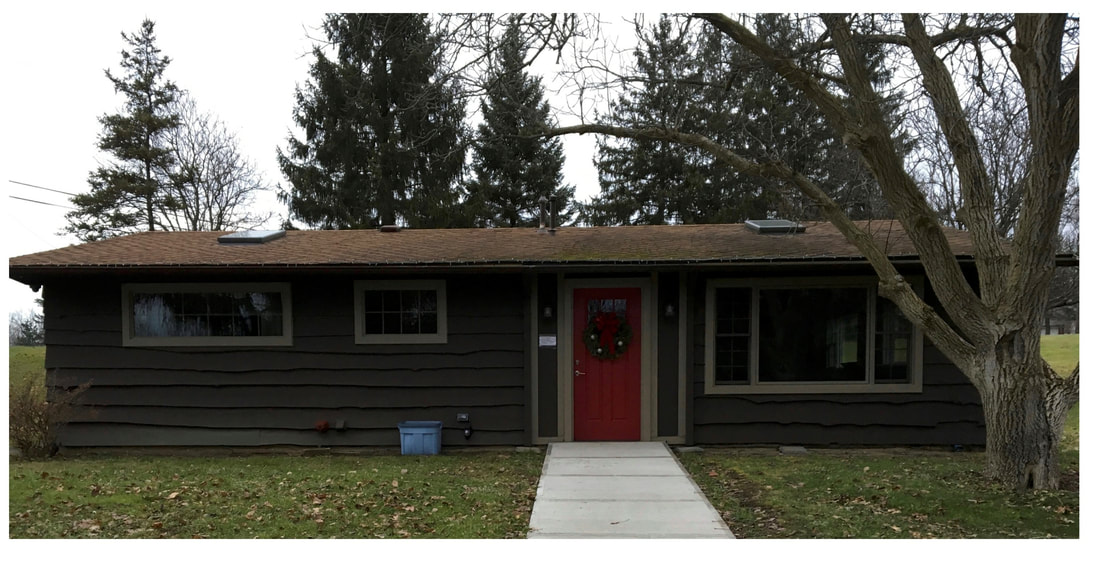 Transformation of the former Camp Managers' House to the Richfield Heritage Preserve Office.

The project was spearheaded by Meg Slifcak, 2018 Vice Chair of the RJRD; to provide a central administrative workplace for the RJRD and meeting area for park partners. The floor plan was designed to be versatile, and can be re-adapted to living space if needed for the future. The majority of the funding for the project came from the 2017 bond issue, augmented with twenty two thousand dollars in donations from Friends of Crowell Hilaka (FoCH).

Much of the construction work was done by students from the Cuyahoga Valley Career Center (CVCC) under supervision of their instructors. Park volunteers also had a major role, refinishing the ceiling, prepping and painting the exterior siding, and other tasks. Local contractors helped out, and the office furnishings were donated by Group Management Services. 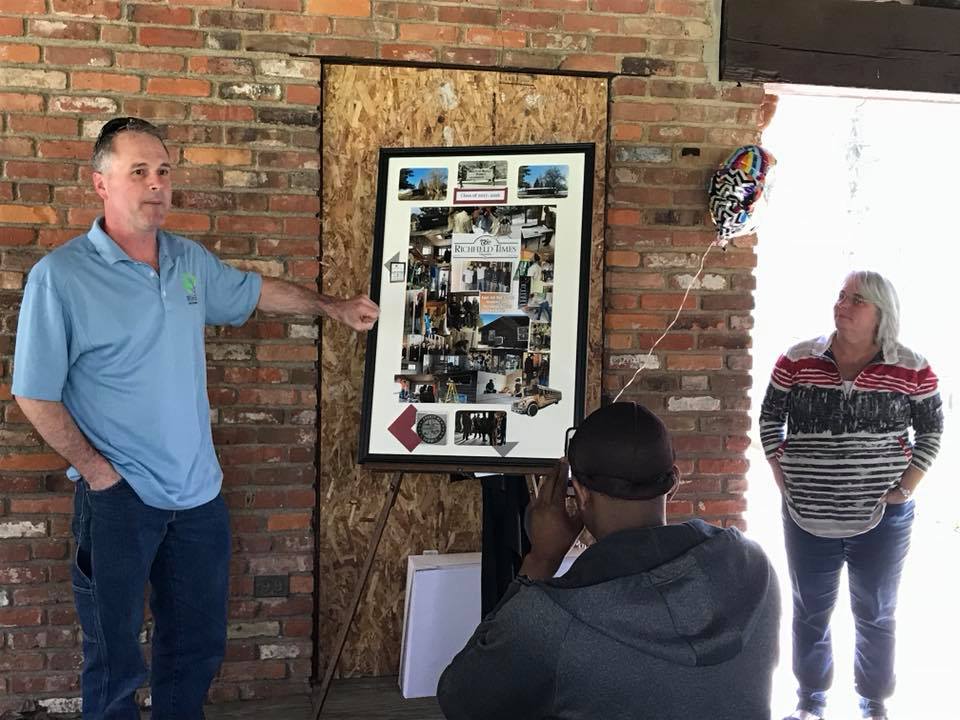 RJRD Chair Bob Becker and Vice-Chair Meg Slifcak prepare to present a token of thanks to CVCC . Amity Porch 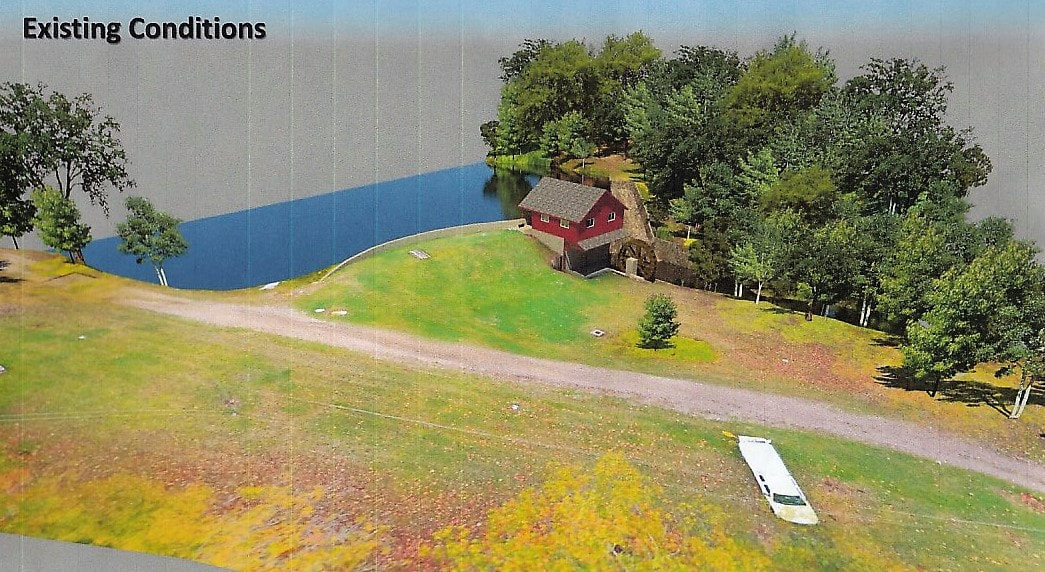 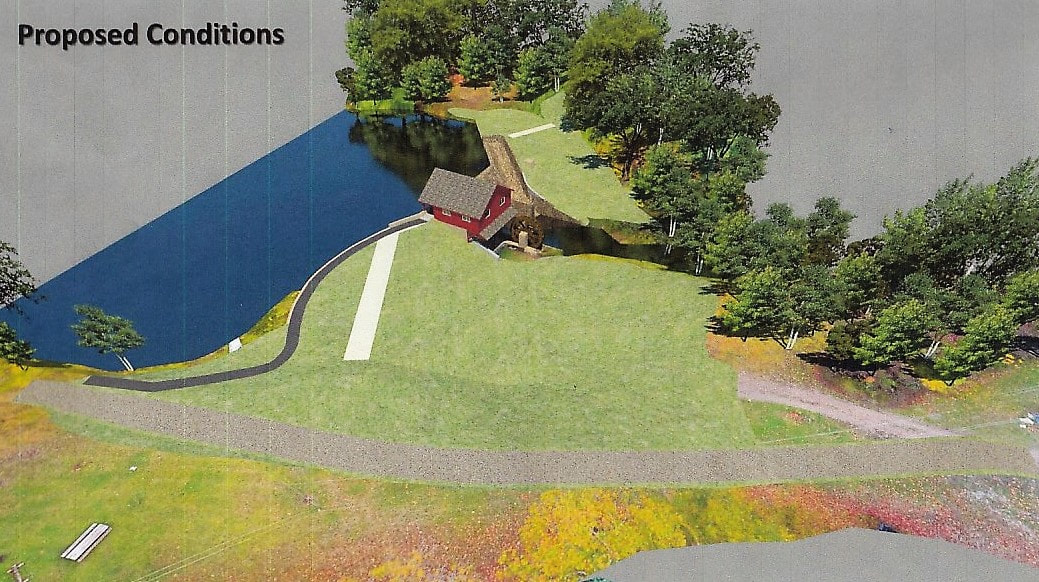 ​Meanwhile, needed repairs were made to the existing spillway. 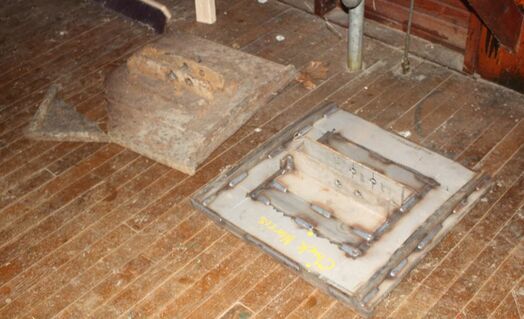 Broken sluice gate at left; new gate on the right.
The valve that allows the lake to drain periodically had jammed, but it could not be repaired until the water level was lowered. Once ​enough water had been pumped out, Jeff DeLuca and Pat Norris cleared away the mud from the back of the dam until they could reach the valve. They found that the cover of the opening, technically known as a "sluice gate" was broken in two places. They eased it out of it's mud-covered tracks, hauled it out, and cleaned it up. Pat took it to Standard Welding in Medina. It was beyond repair, so a new sluice gate was fabricated from stainless steel. 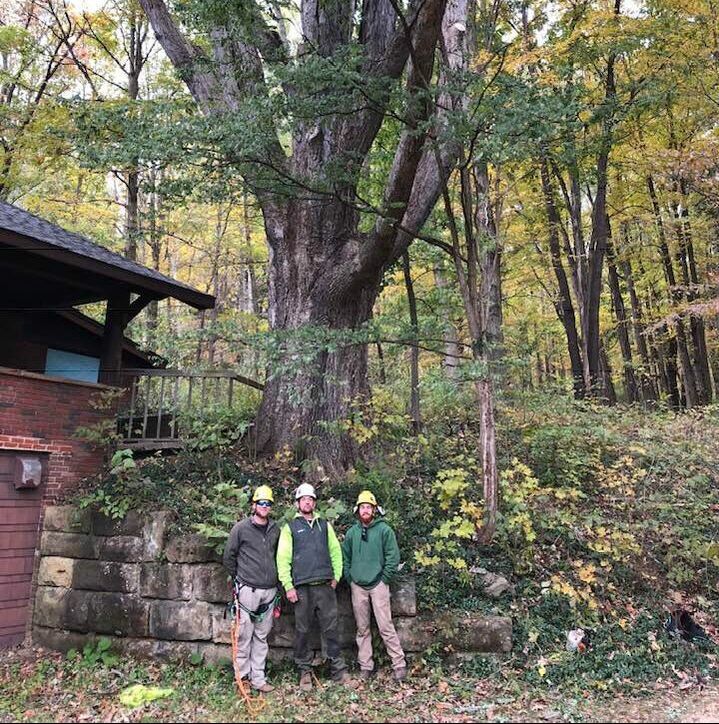 Kirby's iconic white oak tree is near the new dam's planned construction zone. Its roots will be impacted by the raised roadbed as well as the construction process itself.  FoCH arranged consultations with the Ohio Department of Natural Resources and Davey Tree Company to assess the potential for stress on the tree and to make recommendations for optimizing the trees's heath before construction begins. RJRD contracted with Davey tree company for pre-construction pruning.  Above, the Davey crew poses at the base of the tree. 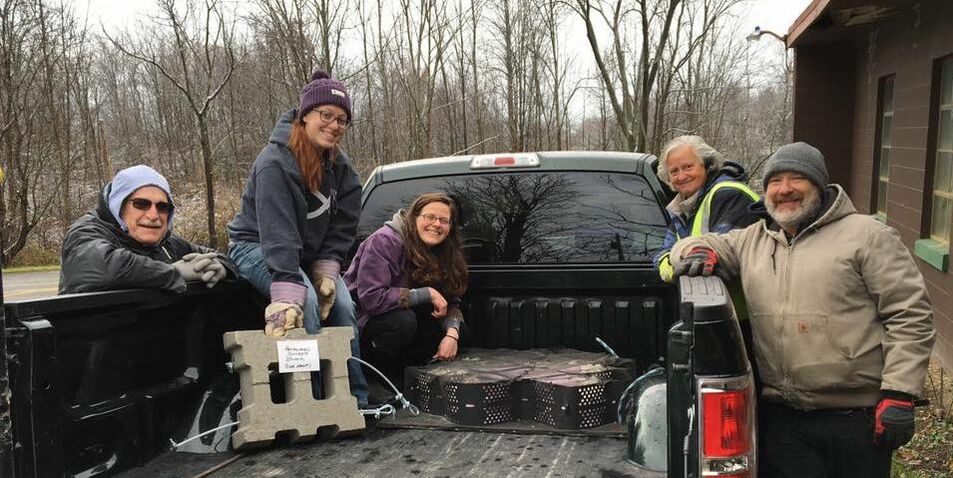 Elizabeth Csontos ( in purple hat) shows off an Articulated Concrete Block. Each ACB will link together with others of its kind to form a giant, chain mail-like covering over the downstream face of the dam.  FoCH president Corey Ringle ( in purple coat) accompanies a  sample of the gravel grid support layer that the ACB "blanket" will will rest upon. Tom Rockwood ( at left), Nancy Kanik and Brian Muhlback ( at right) look on. 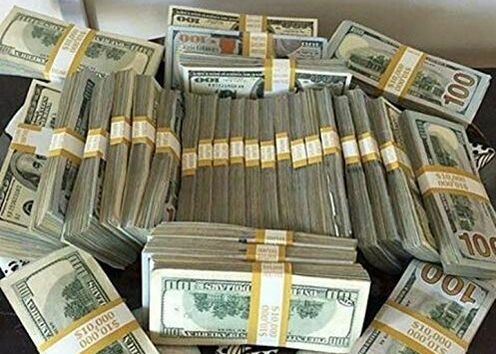 The Bond re-finance  was spearheaded by RJRD trustee Pat Norris. Because of his 43 year background in the government financial services industry, Pat began considering options for the long term financing of the park even before he was appointed to the RJRD in mid 2014. He initiated his strategy by collaborating with capital markets professionals he had worked with throughout his career. By the time the levys passed muster with the Richfield voters in November, he already had a team assembled with a plan of attack for the needed financing.

Short term notes were first issued in order to come up with the needed funds to buy the property. The longer term financing was to be provided by a bond sale.  A local bank purchased the notes to get the plan rolling; institutional investors were later to purchase the bonds that would retire the notes.

The bond sale went well in that all the bonds were sold. The only thing that did not go according to the team's high hopes was that  newly formed RJRD was unable to get a credit rating for the bonds and therefore had to offer a higher coupon rate in order to sell all of the needed debt. The team was prepared for this possibility and executed their Plan B, which enabled the Park Board to have the option to prepay the debt after the third year of payment history.

During the late spring of 2018, Pat reassembled the Bond Team. This time the rating agencies were willing to issue a credit rating. By then the Park Board had three years of audited financial statements showing the observance of sound financial principles and good fiscal management that they did not have when newly formed. The bonds were rated A2.

This "investment grade" rating was a badge of higher quality and lower risk that enabled the Board to obtain a lower interest rate on this long term debt that will ultimately save the Richfield tax payer $1,836,627.28 in actual cash savings over the remaining 24 year term of the bonds. 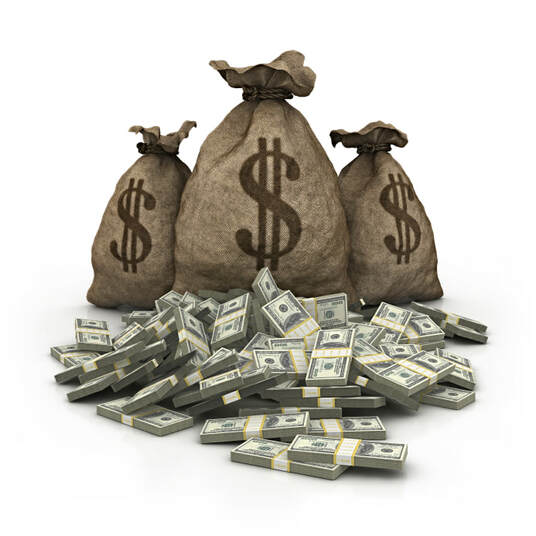 Once the Preserve's own water treatment plant is upgraded, RJRD will be able to turn on the water in the vintage buildings!

​ As chair of the Capital Projects committee, Ralph Waszak,Jr. worked with architects and engineers on the WWTP and dam upgrades.

! Launch of the Invasive Species Management Task Force in conjunction with FoCH

! Co-Hosting the RHP Education Summit with FoCH on March 10

!  FoCH helps support the Preserve by organized hikes, guided tours, lectures, and more throughout the year!

! Volunteer Equipment Training for the Cushman and  fire extinguishers, as well as First Aid & CPR 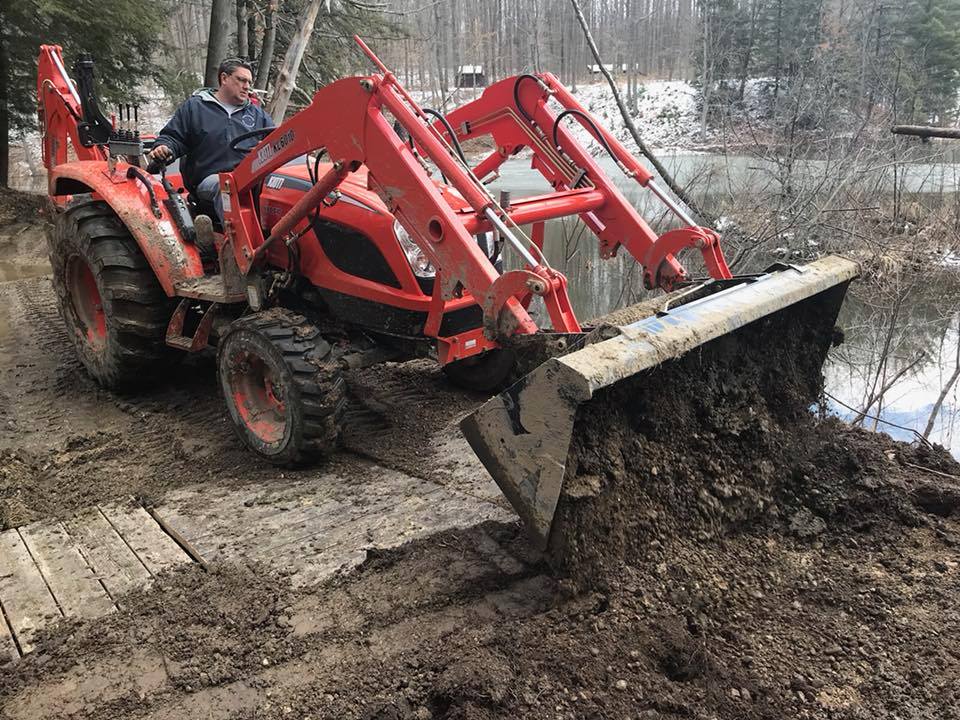 Road repair between the Nature Hut and Lake Jinelle, March 2018 Jeff DeLuca at the helm! 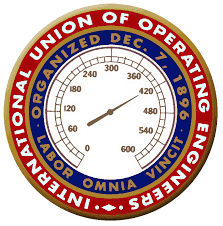 Ohio Operating Engineers to the Rescue!  In 2018, the OOE from from their Apprenticeship and Training facility on Newton Rd placed culverts and graded roads throughout Richfield Heritage Preserve. Work included Hilltop Road, Eagle's Nest Trail, the area between Gemini Cabin and Paddler Unit,  and the road between Amity and North Houses.

Susan Cz was appointed to the role of  volunteer coordinator for the RJRD ( volunteer-info@rjrd.org). She conveys selected park projects to the social media teams of both FoCH and RJRD and handles service hour requests from guest groups. A volunteer herself, she is at the park almost every Saturday!  She is frequently at the park for weekday projects also.

New wayfinding signs made from camp recycled lumber are made and installed under the direction of Elizabeth Csontos.

​Above, left.  Brian Muhlback poses by the entrance sign on Broadview Road.  This sign was installed by Brian, Clive Fetzer, Tom Rockwood, and Susan Cz.  An address board was later added to the top.

Above, right. Joanie Gottschling plants flowers under the new sign at the Oviatt Road entrance. 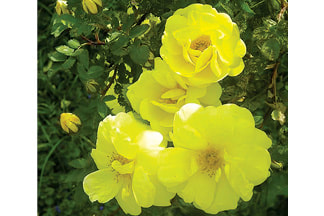 The Oviatt Pioneer Rose was added to the Rose Garden on the side of the maintenance garage. The rose garden is believed to have been established by camp caretaker and Village Council Representative Dave Howard.  It was later maintained by caretaker Stan Polo. After the property transferred to Richfield, Tom Rockwood took over care of the garden.

The Pioneer Rose bush was donated by r.garlen and Gayle Oviatt.  According to the October 2018 Richfield Times, the great grandmother of this flower traveled with garlen's ancestors from Goshen, Connecticut to Ohio's Western Reserve. A cutting was planted on the farm of Mason and Fanny Oviatt at the south edge of the park, and from there cuttings were propagated at each new home of the Oviatts, down through the generations. It is now returning "home".


​The Pruett Family continued their work on Spif's garden.

​Replacement of the  Adirondack roofs was organized by Jon Antalvari 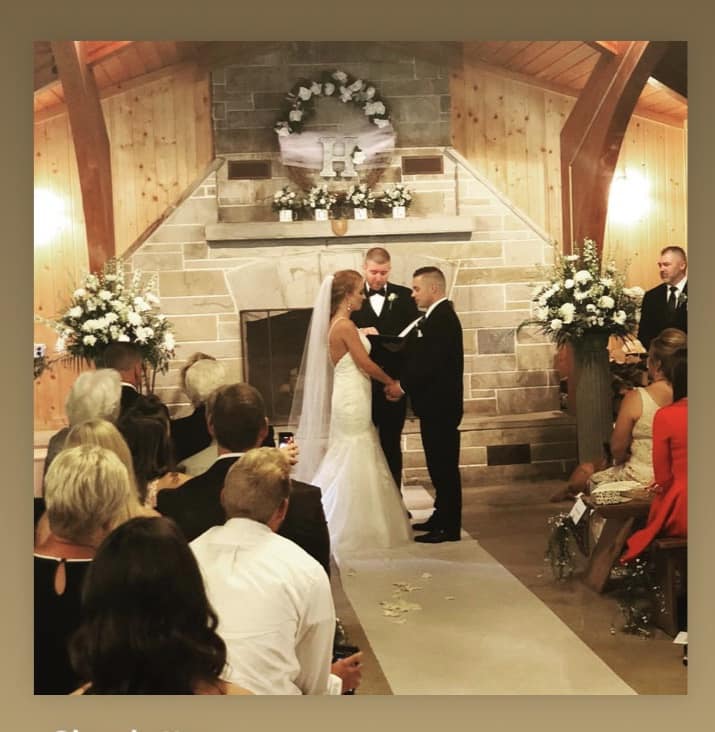 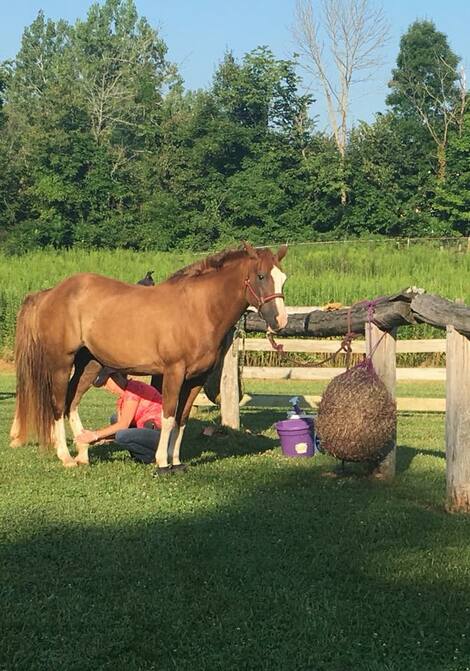 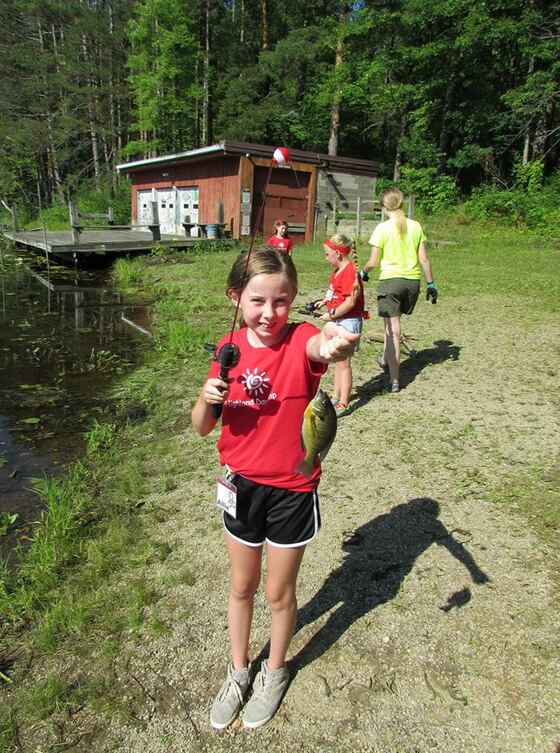 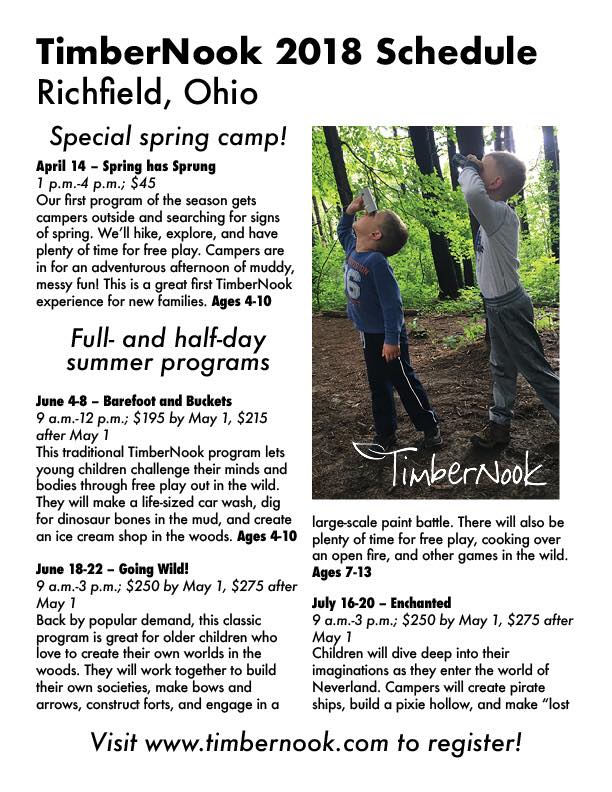 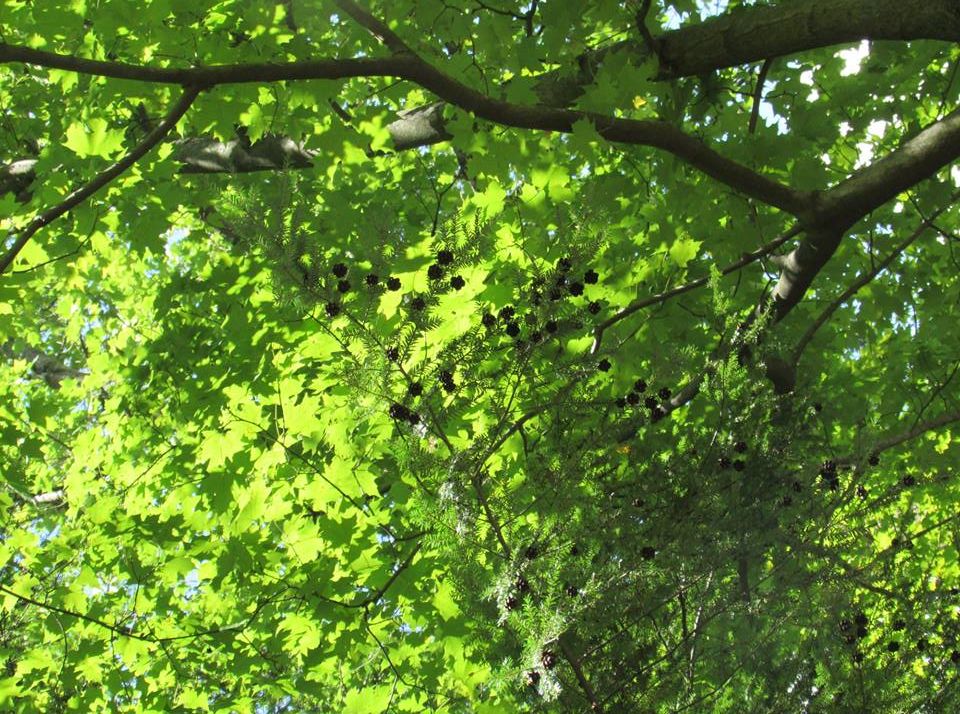 Forests Forever Green. Hemlock branch beneath a canopy of maple. By Chris Naizer 2018