The "fire ring" is an A-frame shelter with a concrete floor, and the fire place is a pit in the center of the floor.  When the fire grate is fitted over the pit, it is level with the rest of the floor.  The cooking area is an octagon (eight-sided) shelter. Storage units are built into one side of the octagon, a trough sink tucked into another, and prep tables low enough to use from a chair are built into yet two more sides.  In the center is an octagon table.  A lantern hook hangs from a chain from the center of the peaked ceiling, and it can be raised and lowered on its pulley, should one wish to adjust the ambient lighting.  The outhouse features a long ramp and appears to have enough room inside for extra maneuverability.

This unit is located between the stables and the gas cut.  A slight jog west across the gas cut brings one to the south entrance of the Storybook Forest Trail. 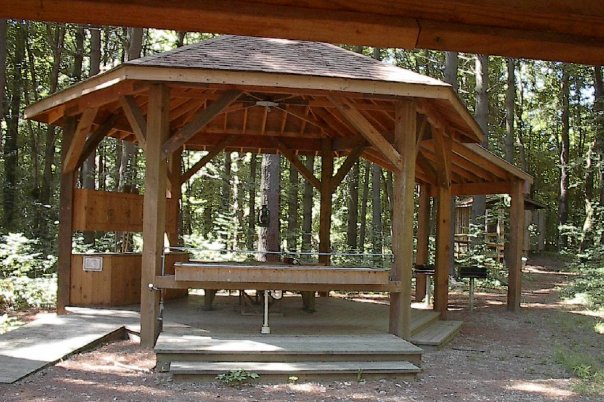 I have not been able to find out anything about the origin of the name "Skanawunda".  But I strongly suspect it was part of the popular trend at the time to make up native tribal-sounding names out of mis-spelled, glommed-together English words. [Other examples: in the American Girl Series, Molly McIntyre spends a summer at Camp GoWaNaGan (go on again), our own Camp Hilaka (high lake, uh )] . It might have stood for Scan (as in view) of Wonder - a tad awkward, but appropriate considering the view into the valley.  Or it might have stood for Skein (as in a bundle of yarn) of Wonder - obscure but poetic; maybe a description of beautiful bands of color across the sky at sunset?  Or maybe it was something completely different.

The octagon kitchen is a gem of design.  It is especially appropriate here because The Octagon House on Rt 303 is a famous Richfield landmark.  According to various newspaper clippings in the Richfield Historical Society archives, octagon houses were briefly a fad of the mid-nineteenth century.  Proponents believed that the radial floor plan would encourage fuller, healthier breathing.  The Richfield Octagon House at 4799 Streetsboro Rd. was built in 1864 for Alanzo Chandler.  Contrary to what many guess, the rooms are NOT wedge-shaped.  There are four main rooms on the first floor:  living room, kitchen, and two bedrooms.  They are arranged like an X with small triangular rooms in the spaces between them.  These triangular rooms are a front entrance hall, back entrance hall, a bathroom and a pantry.  In the center is a square stairwell and the chimney. The Richfield Octagon House is a private home not open to the public.  Fortunately, you can try standing in the middle of our octagon. Take a deep breath.  Do you feel any healthier?

High Lea Shelter was built as a memorial to a girl who loved scouting and loved Camp Julie Crowell.  Thirteen year old Sallie Louise Parker was killed by a lightning strike on August 4th, 1959 at 4:45 am.

Many years later, a large tree fell onto the roof of the shelter, crushing it.  It was rebuilt and re-dedicated in 1991. 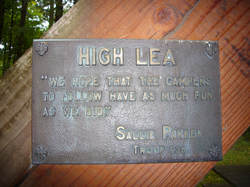