At about 4:45 on the morning of August 4, 1959, while the girls slept at Camp Julia Crowell (CJC), a bolt of lightening from a summer thunderstorm struck a tree and forked out to strike two tents in a primitive camping section of the camp.  Two thirteen year old girls, Sallie Parker and June Gamble, were killed instantly.  Merrilyn Featherstun and Lynn Weisenberger in the other tent were injured. Camp station wagons took the injured girls to a hospital in Medina. Merrilyn was treated and released. She considered returning to camp but decided to go home. “I’ll be back next year”, she told camp officials when she left.  Lynn was hospitalized for a few days and did not return to camp; however her sister Peggy stayed at camp. ”Why bring her home?”, asked her father. “It is a well run camp. You can’t guard against lightening.” A few parents withdrew their children from camp, but most of the 200 campers stayed. 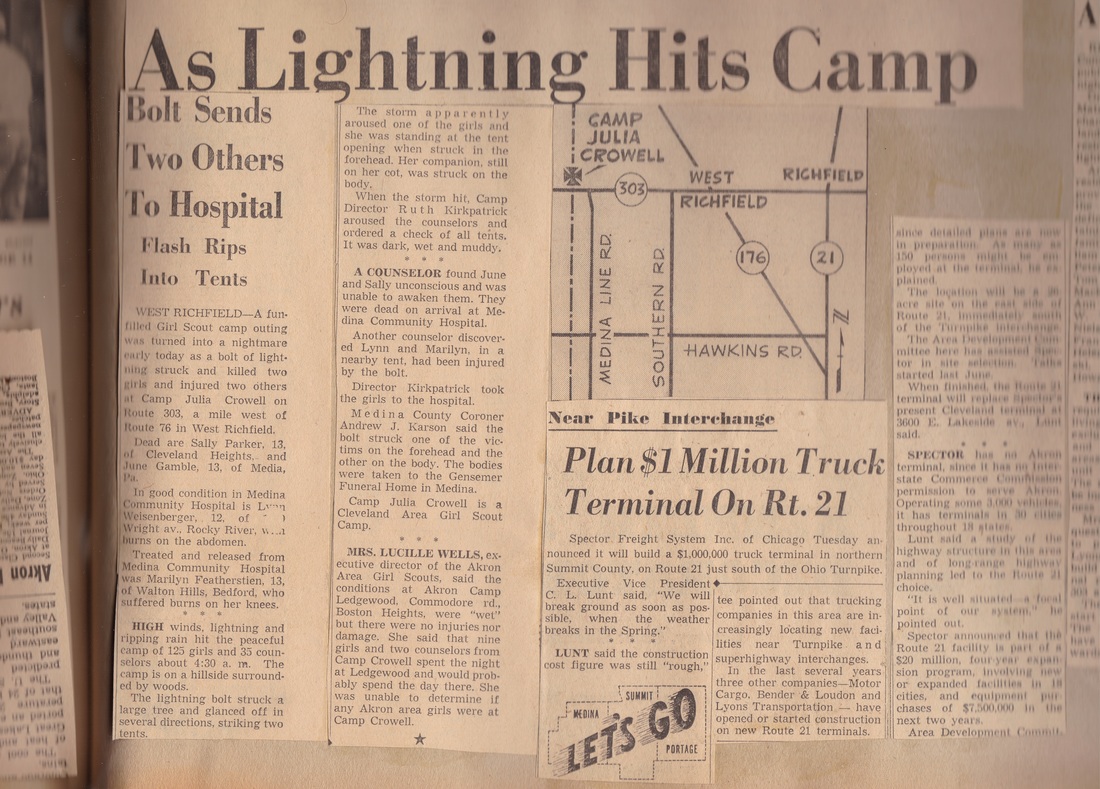 If there were any way to manifest the utmost sympathy for the families of the two Girl Scouts who were killed by lightning at at the Julia Crowell Girl Scout Camp early Tuesday morning; the entire Greater Cleveland Community would rise to the occasion.

But there is so little that can be said in such swift tragedies by the tens of thousands who feel a kinship in in sorrow with the bereaved parents.

The two little girls, Sallie Parker of Cleveland Heights, and June Gamble of Media, PA., were wonderful girls, the best of Scouts.
Sallie had apparently had gotten up to tighten the flaps of her shelter tent during the storm. June was found dead in her sleeping bag.

Sallie was an honor student at Roxoboro Junior HighSchool,  a member of the juniot choir at Fairmount Presbyterian Chirch and of the Westminster Fellowship.

Services for Sally were 11 a.m. today at Fairmount Presbyterian Church Chapel and burial will be in Allegheny County Memorial Cemetery.

The family requested that contributions be made to the the Cleveland Girl Scout Council.

They are gone now and we would like to express our sympathy in that traditional rite of being permitted to "stand around the house" at least in spirit as a comfort.

There are thousands of us saddened homes on Guilford Road in Cleveland Heights and on a quiet street in Media PA.