Crowell Hilaka
Jim Kirby
﻿
Growing up, Jim Kirby watched his mother at her endless round of housekeeping chores. He thought that women were stuck spending way too much time on monotonous drudgery, and that much of their repetitive work could be replaced by electrical appliances. With that goal in mind, he began designing and building such devices.

Many people have heard of Kirby vacuum cleaners. But that was just one company that decided to name one branch of their operations after Kirby. Kirby also invented improvements to electric dishwashers, irons, and washing machines. Kirby invented the first practical spin cycle for washing machines.

Prior to Kirby’s mass-produced “Laun-DRY- ette”, women had to haul heavy, soaking wet clothes out of the wash tub and through a wringer.

Kirby eventually amassed over 150 patents, most involving laundry or vacuum cleaners. But there was a sprinkling of marvelously unrelated sparks of genius: air conditioners, a fishing reel, a lake. Here is a list of his patents. Patent look up by number

By age 35, Kirby had made his fortune.

Able to go anywhere and do anything he wanted, he chose to move from his native Cleveland twenty miles south to the town of Richfield. Beautiful though the land was, Richfield did not have the electricity he needed. So Kirby designed and built a hydroelectric mill to generate power.

But before he could build the mill, he had to dam up the creek to create a millpond. Trouble is, artificial ponds fill up with silt and have to be dredged out periodically. But this was the guy who was all about avoiding drudgery. He simply didn’t want dirt getting into his lake in the first place. So he devised dams across the feeder creeks that would let clear water in, but keep muddy storm water out. The storm water would be diverted into huge drain pipes that ran under the lake bed. As far as anyone knows, this is the world’s only patented lake. Kirby also designed a sled so that would permit a man to clear out the drain occasionally.

While the lake was filling up, Kirby built his house just above the high water line. Next he constructed the mill with a wheel that balanced on ball bearings and could turn with just a trickle of water. This was the first water wheel of this type ever.  The room above the generator became his workshop. When he wanted to take a break from tinkering he could pull down the hinged stairway, climb up to the loft and look out over his lake.

Just for  fun he built a dance hall on old streetcar springs and ran a swinging bridge across the dam spillway. He put up a combination picnic shelter/boat landing just below the main house. He constructed a pier that ran halfway across the lake, and a boathouse with a dock on the far shore. He hired a botanist to travel around Ohio and bring back unusual specimens of wildflowers for his garden. He stocked his lake with fish and then trained some of them as pets who would swim up to him so he could tickle them under their fishy chins.

Kirby opened his lavish grounds to Richfield townsfolk every Monday and Friday (and by special request). Within a few years, Kirby felt he needed a bigger lake for bigger fish. He got permission from his nearest upstream neighbor to create a shared lake.

After fifteen years at this estate, Jim Kirby and his wife Nellie moved. Their new house, designed by Jim, was barely a mile away from the old one. It also soon had a large lake.

Jim continued inventing, keeping up with his business interests, raising prize cattle, traveling with Nellie, and of course, fishing.

After Nellie died, he retired to Florida, where he developed the Oceanside shopping center. 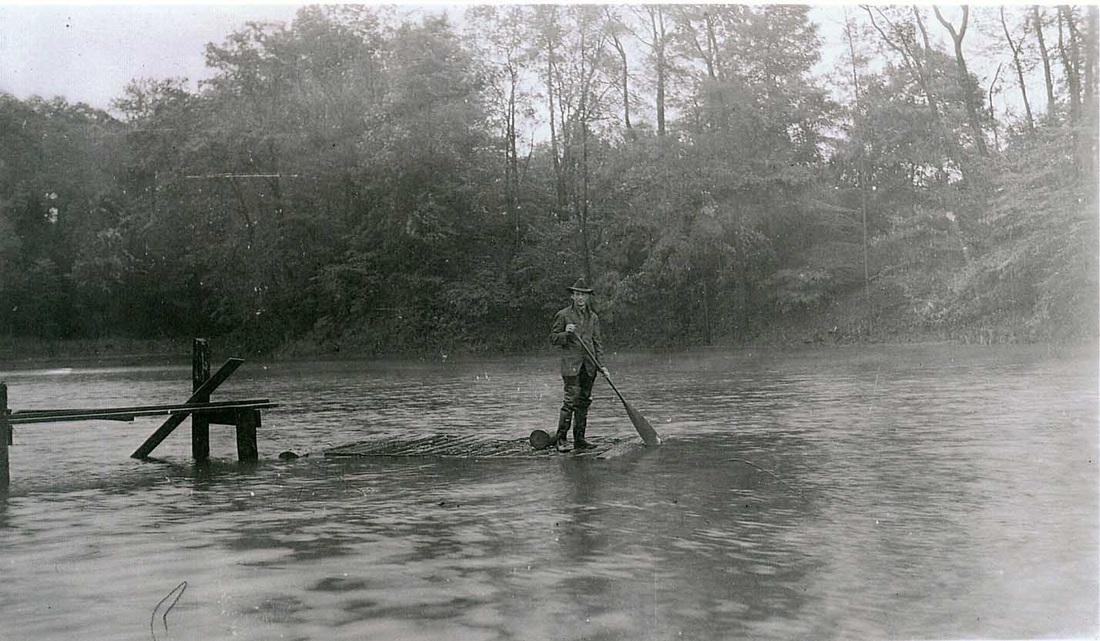 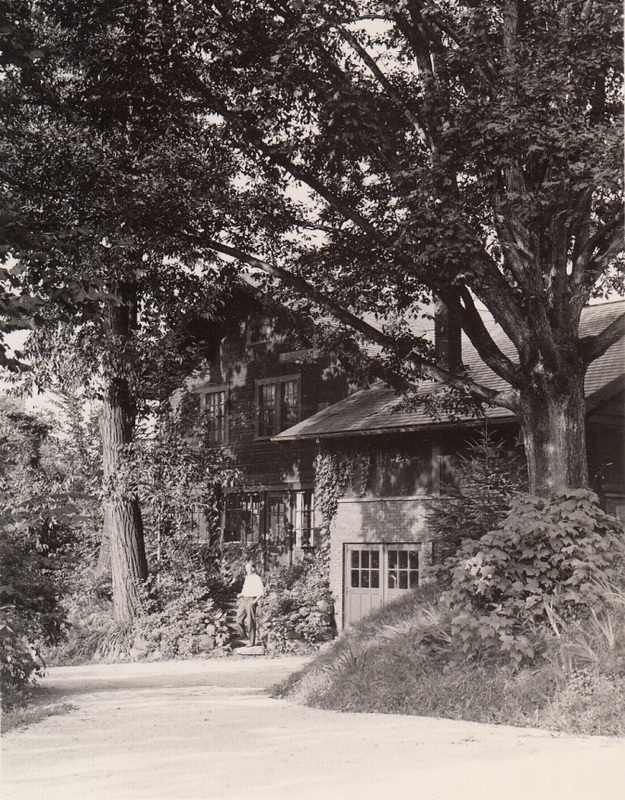 Kirby stepping out his back door - photo courtesy of GSNEO archives 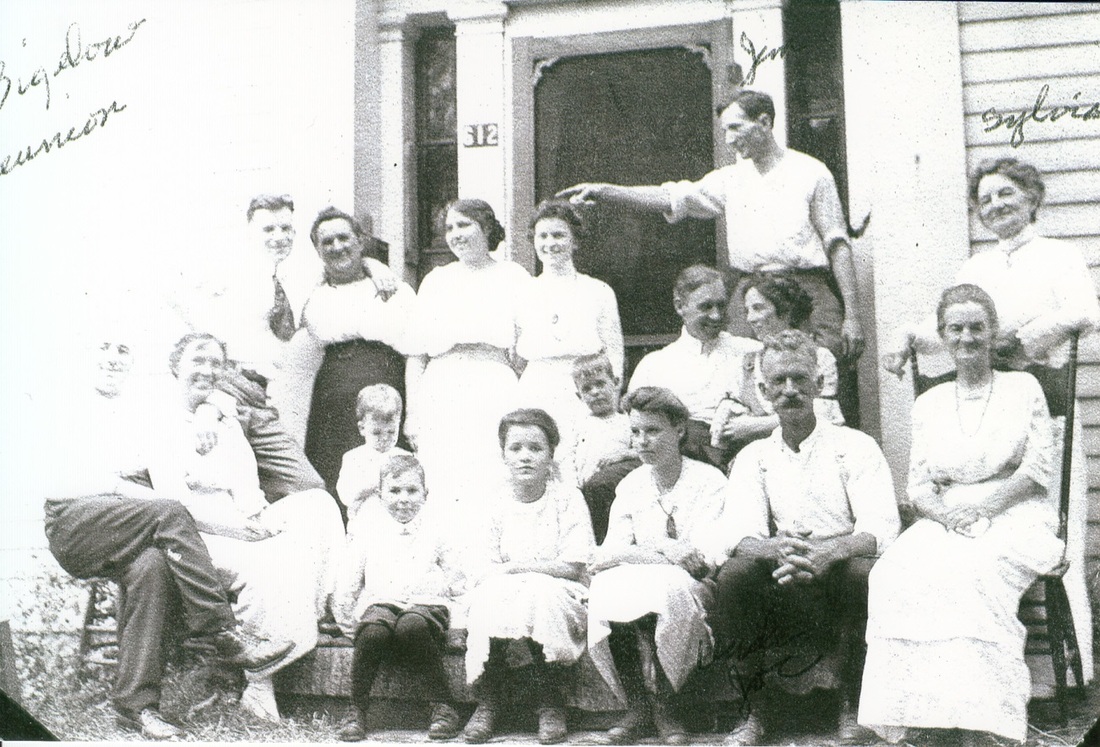 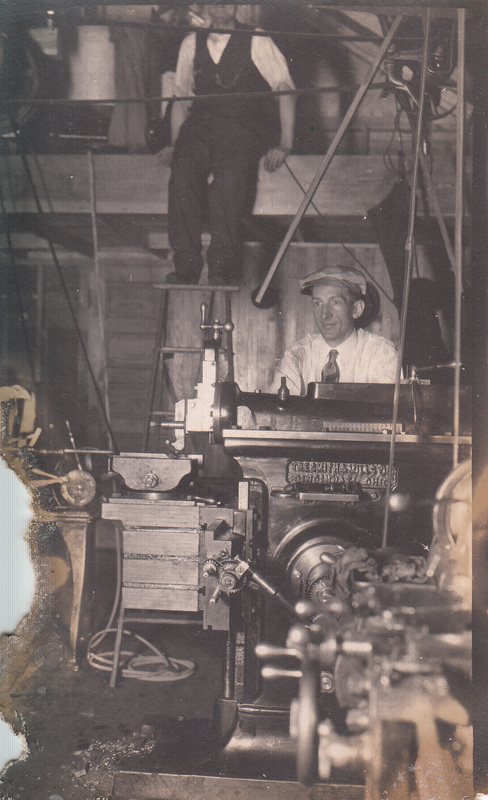 Parents:  James D. Kirby & Sylvia Bigelow Kirby.
​He may have been named for James Blaine, the Republican candidate for president in 1884.

Around age twelve Jim was inspired by a YMCA class called “Electricity and Magic”.  He turned his parent’s backyard barn into his workshop. Challenged by a teacher, he built a working model of a grain mill.  When he was unable to afford a model train set that he coveted, he constructed his own model.

He attended Lincoln West High School.  He was interested in chemistry, but not in the humanities courses he was forced to take.  He left high school after three years.

After leaving school he worked in a machine shop, but soon recognized that he wanted to be his own boss.  To save money for his own shop he took on two side jobs.  He assembled newspapers for the Cleveland Leader and became a lamplighter, walking a four mile route every evening and morning.

At age 17-20, he hacked into unused telephone wires to provide a private phone exchange for his group of friends.

One of Kirby’s first commissions after he opened his own shop was to devise a recording machine for the telephone of a doctor’s office.  It worked so well that the doctor had it patented.  This incident taught Kirby to apply for patents under his own name if he was going to receive credit for his work.

1906  Kirby built his first vacuum cleaner.  Although it was an improvement on existing technology, it used a water based filtration system – thus was bulky and required two people to operate.

Undated picture postcards from around this time show Kirby at various hunting and fishing camps.

September 2, 1909  Married Hazel Hackett.  Hazel was a school teacher in Bath Township. She grew up on the family farm in Bath.  . 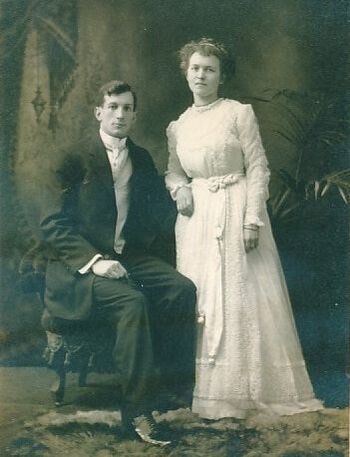 1914   Jim helps organize a reunion of his mother’s family, ”The Bigelow Cousins”.

1916   LaunDRYette Company founded by Arthur Betz based on Kirby’s designs.  The LaunDRYette was the first commercially successful washing machine with a spin “extractor” cycle.  The company declined to make the continual improvements that Kirby urged, and competition forced them out of business in 1926.

With American entry into The Great War, Kirby became a “dollar-a-year- man”. He was assigned to expedite the conversion of Scott and Fetzer’s general machine shop to production of flare guns (Very pistols). 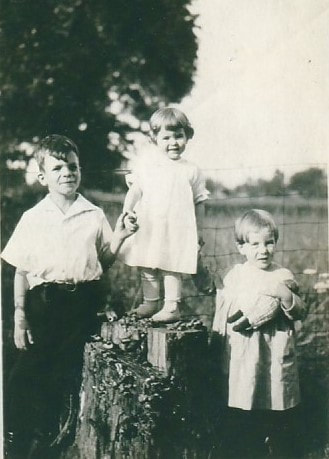 The Kirby kids: James ( "KIrb" ) Vernon, Jeanette, Doris ( "Dorrie"). Photo courtesy Laura Kirby Cronin
Kirby was impressed with Scott and Fetzer.  At the end of the war, Kirby suggested that they might like to go into production of his newest model of vacuum cleaner.  Scott and Fetzer begin production of Kirby’s Vacuette in 1919.

Also in 1919, Kirby bought the Raymond Oviatt farm in West Richfield. He applied for the patent on his lake design and put the design into practice on his farm.
​ 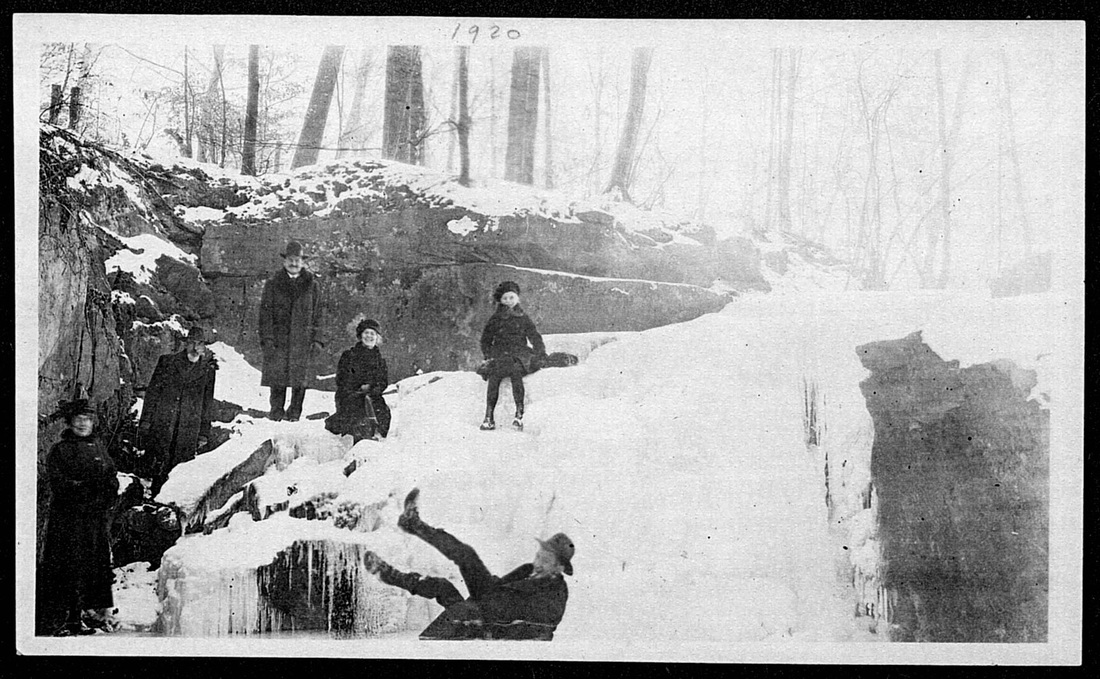 Jim Kirby pretending (we hope) to be falling off of a frozen waterfall on his estate. Other people include (from left to right) his wife Hazel's parents, Hazel's brother Claire, Hazel, and probably his son Vernon, age 8 ( photo courtesy of Laura Kirby Cronin )
1920  Notice posted in the Richfield Reunion booklet: an open invitation to Richfield Families to visit his new farm any  Monday or Friday.  Special requests would also be considered.

House on the lake finished.

1923 Dance hall on street car springs built at the head of the lake.  First event held there was the Vacuette Company picnic, complete with barbeque and orchestra. Niece Virginia Kirby Baumgartner later called her Uncle Jim’s place “a story book world", “ a castle in the country  with a butler and a maid and a big beautiful lake and a log cabin”.

Kirby’s brother Walter acts as an agent to purchase materials at a better prices than Jim would be able to negotiate.

1927  Contracted with the Apex Electrical Manufacturing Company to begin production of vastly improved washing machines.  The president of the company is Clarence Frantz, one of the brothers who founded  the Premier Vacuuming Cleaner Company based on Kirby’s designs.  Kirby eventually became an Apex trustee.

1925 Committee work to bring electric grid to the Township is successful.

Meeting notice of Richfield Electric Light Association - courtesy of Tom Rockwood
1931 article described Kirby estate as “the Catskills of Ohio” and describes turning into the tree-lined driveway:   Here it was cool.  The rustling of the leaves mingled with the splash of brook against stone.  A turn in the road and there you saw the Kirby home… On the left, a huge water wheel slowly revolved, presenting a picture which might have been taken 50 years ago.  A lake, a half mile in circumference, lay in back of the wheel.  Varieties of fish brought from nearly every part of the country swim in the lake. Mountain trout, brought from the sparkling streams of Northern Michigan and Wisconsin wilds, Canada, and the mountains, swim there also.  Graciously, the inventor took a reporter and photographer around the entire estate.  Trout pools ran through the place. Here, in the middle of the forest, a shallow stream ran. Here, under a rock, the pool grew deep, and here, one, two, and three pound trout lurked. Ferns and wildflowers grew in profusion…….So natural are the lakes, the trees the flowers and the streams that the visitor would say they had always been there.  But careful planning by Kirby has made those things which were artificial as real as if they were in their natural state.

Even the prodigious bullfrogs which croak loudly and dismally through the night have been imported from Canada.  They are Kirby’s pets.  He feeds the fish from his hand.  If Kirby wants to have a fish fry for his friends, he simply takes rod and reel, whips the fly into one of his trout streams and angles for his luck. And he has plenty for the streams and lakes are well stocked…..

1936  Kirby comes up with his “least successful invention:  the “bloodless fox hunt”   After trying hunting  he said he “lost all desire to kill”.  According to a 1936 news clipping, his new idea was to set a pack of beagles after a fox. “ The fox knows the beagles can’t catch up.  So the fox takes his time and the hunters follow on foot.”

1936  Builds new house just ½ mile away from the old house. First house in Richfield with an elevator.  Built by the Ellis brothers.  Spring-fed lake on divide between Furnace Run and Rocky River watersheds.

1937  Sold old estate to the Cleveland Girl Scouts and helped them with the purchase.  Prize cattle raised at new home

1953 Purchases land for Oceanside Center and and begins building

"The Man Who Revolutionized the American Home", by Lowell Thomas.  This little booklet was the first biographical information I ever read on on JBK.  It is probably the most engaging article on his life; not surprising as its author was a well known storyteller and radio commentator.   But there are a couple  inaccuracies.  There is no mention of Scotland in JBK’s known genealogy – although his father was born in Wales, which is also part of the UK.  The patented lake was part of Kirby’s original design for his estate, not an afterthought.
The original booklet was published in mid 1930’s by Scott Fetzer Co. - probably as part of the campaign to introduce the Kirby vacuum cleaner line.   It was reprinted with Kirby’s own comments and re-distributed after his death.

http://www.oldewash.com/index.asp  Lee Maxwell, expert on vintage American washing machines:  By his inventions and association with the Laun-Dry-Ette washer I would say Mr Kirby belongs in the washing machine hall of fame (if there were such a thing). The Laun-Dry-Ette was the first machine to have been mass produced which combined the washing and the spinner in the same tub. There are patents which precede Kirby’s which propose washing and spinning in the same tub but those patents never resulted in a successfully mass produced machine. Kirby did not invent the centrifugal spinner but his “inventions” made them work successfully. When I give tours in my museum the Laun-Dry-Ette is always one of the favorite demonstrations. -

Kirby as a major trustee of Apex http://law.justia.com/cases/federal/appellate-courts/F2/238/867/247899/  plus numerous patent grants